Having been a media student, I do like to look at advertisements and some of the ads in the old newspapers at Trove are absolute treasures.  I came across this group of advertisements recently in the The Mercury, Hobart from May 21, 1917.  The were all found on Page 7, otherwise dominated by racing news.  Only one, a Havelock tobacco advertisement, was directed at the person in the house most likely to read that section of the paper.

Just as they do today, the advertisement play on the insecurities of consumers.  In these examples they include ‘Am I a good mother/housekeeper?”  and “Am I as attractive/fashionable as I can possibly be?”  Buying the featured products would miraculously take away those insecurities.  Or so the advertisers wanted consumers to believe and still do.

Online shopping was not available in 1917, but the same excitement could be experienced when a mail order parcel arrived in the mail box.  Aimed at the country lady (hence the necessity to ride to the mail box), this advertisement makes the reader feel they could be missing out on something if they did not buy from Andrew Mather & Co, with “thousands of satisfied customers.  Are you one?”

My post on Spring Fashion, explained the change of dress length during WW1.  This advertisement heralded a new era in ladies footwear.  No longer could shoes be hidden under a lady’s skirt. 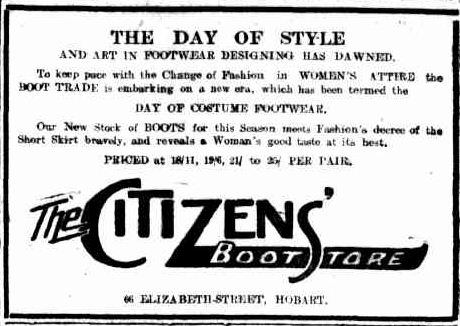 If it’s good enough for the washerwoman….This Robur advertisement targets both the well-to-do lady of the house and those struggling to make ends meet.  The washerwoman shamed the households that bought “cheap rubbish”” to serve to their staff, and maybe even their guests,  and reassured those on lower incomes that Robur worked out cheaper because it went further and even the finest grades were affordable.

Buying Edmonds Baking Powder was a must for becoming a better home economist.

What a great product Lane’s Emulsion must have been.  It cured Mrs Collison’s daughter of asthma!  All it took was six bottles…poor Ella.  Testimonials in advertisements where very common.  In fact, you may find that a relative gave a testimonial.  While researching Sarah Harman’s son, Alfred James Oakley, I found that he had given a testimonial for  Mr Lum the Chinese herbalist from Stawell.  Apparently Mr Lum’s herbal medicines returned Mrs Oakley to full health, something three months under the care of doctors in Melbourne could not do. 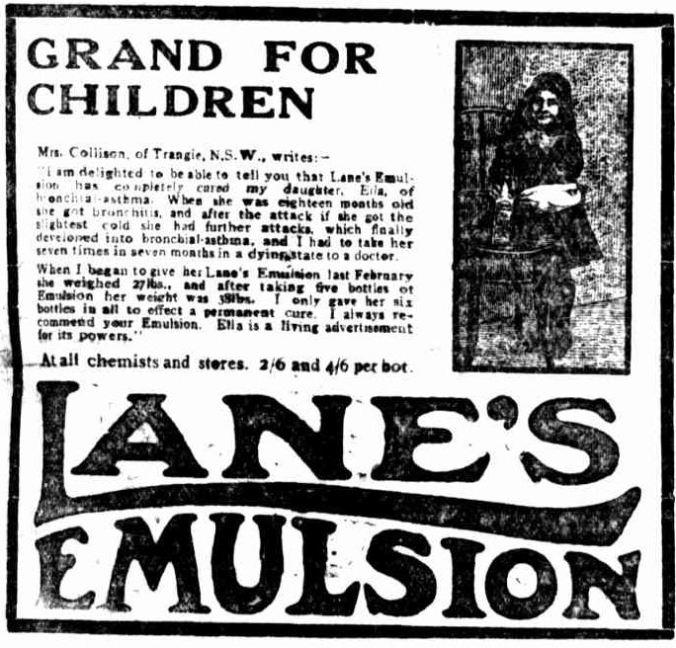 An interesting choice of ads to place side by side.  Both  play on a housewife’s doubts about herself, with the ad on the left suggesting experienced housewives know Rex Lorraine Smoked Sausages are “good and fresh”.  Buy them and you too will be a success.  Just “pop the tin in boiling water”, so convenient and  no greasy pan to wash!  Trouble is they don’t sound very appetising.  If  the smoked sausages in jelly caused an outbreak of pimples, Cuticura was the answer.

The pimple cream ad. and this one for Russian Hair Restorer, show us that women 100 years ago did care about their appearance.  All that was needed for beautiful hair was a Russian potion.  And what a potion it must have been, supposedly having the power to return grey or faded hair back to a natural colour while stimulating growth.

So next time your browsing the Trove newspapers, check out the advertisements.   Learning about our ancestor’s  food, entertainment, dress and more can go a long way towards understanding their lives.