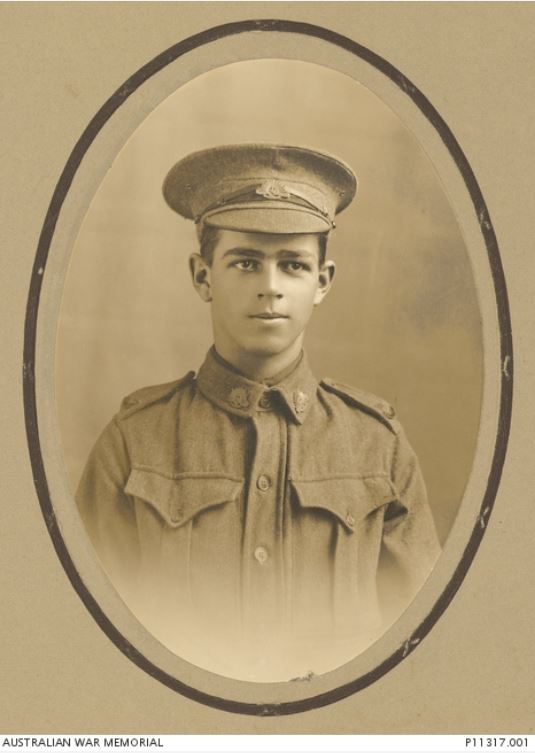 George Morison was a teacher at Warrnambool State School when he received a posting to teach in Suva, Fiji around 1896.  With his wife Harriette Blanche Sturley and three sons Alexander, Vivian, and James, they set off.  Three children were born to George and Harriette in Suva, Ivan in 1897 followed by Donald and Herbert.  The Moriesons returned to Australia in 1901 when Ivan was four years of age. George worked as a relief teacher at Bendigo but while the family were visiting Warrnambool in December 1901, George received notification of his appointment to the Hamilton State School.

The family resided in Alexandra Parade after their move to Hamilton.  Ivan having reached school age attended Hamilton State School and on Sundays, the St Andrew’s Presbyterian Church Sunday School.  In September 1913, the education board advised George he would start work at Lindenow State School in Gippsland and after twelve years in Hamilton, the family were on the move again.  Before they left, the Morieson boys were each presented with a bible from their St Andrew’s Sunday school teacher. By that time Ivan was sixteen.

WW1 broke and on 16 September 1914,  Ivan’s eighteen-year-old brother James enlisted, leaving Australia in December.  Ivan enlisted in January 1916 aged eighteen years and six months.  He spent time at the Warrnambool camp of the 21st Battalion before leaving Australia with the 29th Battalion.  Ivan arrived in Alexandria, Egypt on 8 May 1916 then moved on to England on 6 June where he wrote a letter home to his mother:

“Don’t you reckon that we were very lucky to have spent only four weeks in the desert of Egypt? The training here was not very severe. It was lack of sleep that tired us. The reveille sounded about 4 am and sometimes did not finish tea til 8 pm, which gave us a very short time for washing, cleaning rifles, etc., and sleep the day we had from 10.30 am until 1 pm to rest; but heat and insect pests left us little chance to sleep. The food we had was good, and there was plenty of it, but three meals are not enough for a day of seventeen hours; we should have had five meals. The camp at Tel-El-Kebir was on a stony rather than sandy desert. It was like drilling on a metal road, whereas at some of the other camps I visited the sand was over one’s boot-tops. I liked the camp here much better than the camp in Victoria, and that is saying a good deal.

The most popular part of the training was the morning route marches. These marches were only short distance – about ten miles. There were two similar marches, one was to the battleground where Lord Kitchener fought, and the other was along the irrigation canal to the cemetery. We liked the latter best. It lay through a bit of green country and we could rest on the green grass on the banks of the canal. The metal road was five times as smooth as the Bairnsdale road. The cemetery was the only place where we could get shelter from the rays of the sun. In this cemetery lie the dead from Kitchener’s battle, and also those who died during the irrigation works.

The drawbacks of camp life here are heat, flies in the daytime, mosquitoes mostly at night, and sand at all times, sand in your hair, sand in your teeth, sand in your eyes, sand on your clothes, and yet our camp had very little sand compared with some of the other camps. Our camp is on the irrigation area and I have spent hours watching the natives at their work. I often wonder what a modern farmer would say if you plumped him down on an Egyptian farm with only their ancient implements and slow oxen, and asked him to go to work and make his fortune. The plough is still the same as you see in the pictures in Bible history, but the chaff-cutter is a more advanced bit of machinery. It is something like the maize-stalk cutter they use on the Lindenow Flat. They drive this with oxen. There is nothing I should like better than to travel over Egypt at my leisure. A man properly interested could spend a lifetime here, and if ever I get the chance I shall do my best to have a proper look at the place.

We had a delightful time on board the boat and arrived at Plymouth on the morning of June 16. We had an eight hours’ train ride to reach the camp and the lovely green scenery of England was a pleasant sight for eyes sore with the sands of Egypt. We all marvelled at the beauty of the country. It greatly surpassed all our expectations. Very few young men in civilian clothes are to be seen in England. Our camp is situated near Stonehenge, and I was fortunate enough to be present at the annual meeting of the Druids at Stonehenge is held during the summer solstice.

On 12 November 1916, Ivan left England for France, arriving the following day.  He reached the 29th Battalion at Trones Wood near Montauban on 25 November. The battalion remained in the Montauban area for the winter, working on road and railway repairs in the freezing weather.

SOLDIERS OF THE 5TH DIVISION NEAR MONTAUBAN, FRANCE IN DECEMBER 1916. Image courtesy of the State Library of Victoria https://www.awm.gov.au/collection/C53830

Back at home, in April 1917 Ivan’s older brother Ernest enlisted. In Europe it was spring but Ivan was still suffering the effects of winter and on 17 May 1917 while near Lagnicourt, France, Ivan was admitted to hospital with bronchitis remaining there until 28 May.  Come September the battalion was training and Ivan had a chance to take leave in England from 5 September. He was back with the battalion on 20 September, fortunate to have returned with new boots.

The battalion was in the Wippenhoek area of Belgium and still training but preparations were underway for an allied advance on Polygon Wood.  On 24 September the 29th Battalion left for Chateau Segard, south of Ypres and the following day marched overnight to Hooge about three kilometres from Polygon Wood.  At 5.45am on the morning of 26 September, the battalion assembled and already the enemy was bombarding them with gas shells.  At 5.50am they attacked enemy positions in Polygon Wood and their first objective was achieved.  By 1.00pm on 26 September, the final objective was taken and about 120 prisoners were captured.  From then until the morning of 27 September, the 29th Battalion worked to hold back enemy counter-attacks.

In the lead up to the battle, Ivan was batman for Lieutenant (Lt) Johnson of A Company, however, he took on the role of company runner for the advance, carrying messages from the front line to headquarters.  It was an important but dangerous job.  The time was unclear but Ivan was returning from running a message from Lt Johnson to headquarters, dodging shells there and back. He was in No Man’s Land between Black Watch Corner and Polygon Wood when he was shot through the heart by a sniper. Others from his company witnessed his death but knew nothing of his burial, assuming he was buried where he fell.  Later witnesses saw Ivan’s body still lying in No Man’s Land. By then, his new boots were gone. 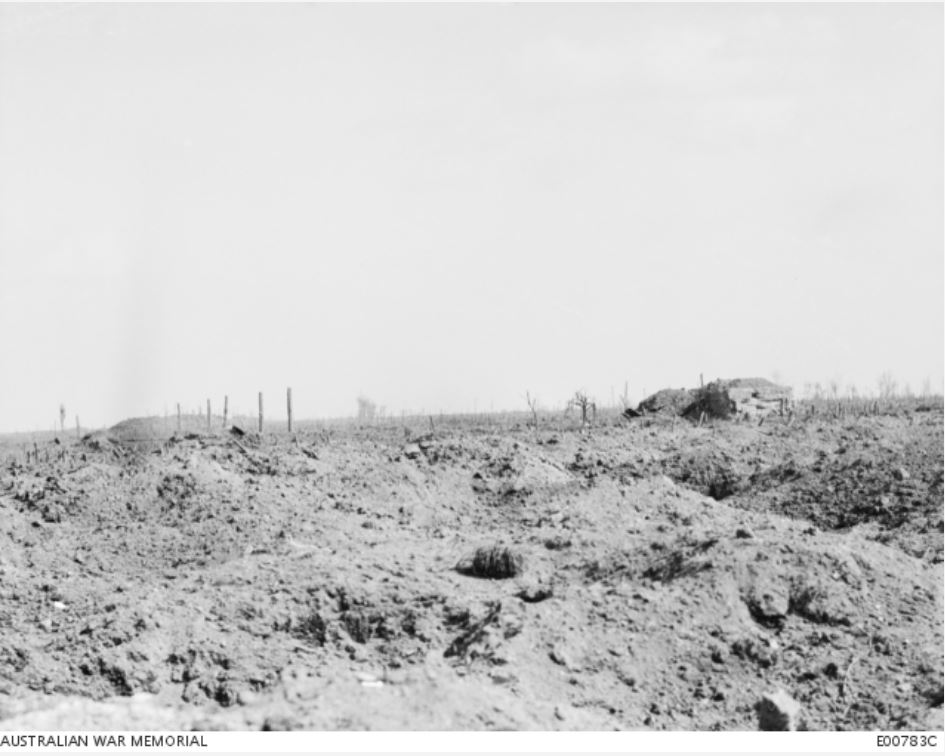 George and Harriette Morieson learnt of their son’s death by mid-October.  Ivan’s brother James returned home in January 1918 suffering from heart trouble.  As the family knew little of how Ivan was killed, James wrote to the Red Cross Society asking for more information.  They could provide a number of witness accounts that may have helped with the family’s loss. Ivan’s other enlisted brother Ernest returned home in June 1919.

In early 1921, a body was exhumed near Polygon Wood.  There was a letter with the remains, written by a Mrs Ada Whitford of Bankstown addressed to Ivan Morieson.  The letter mentioned Ada’s son Will. He had served with the 30th Battalion until May 1917 when he returned to Australia due to illness.  Base Records contacted Ada, and she confirmed she had written the letter to Ivan Morieson, and Will was her son.  Ivan may have met Will while overseas.  With positive identification, Ivan’s new resting place at the Hooge Crater Cemetery was officially registered.