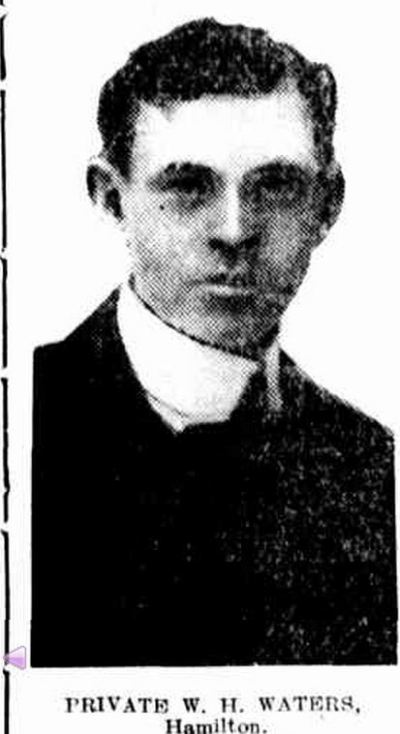 “The youth of the town have had their first piercing illustration of what war means in the Iast resort when they realise that one of their number will never associate with them again.”

With those words, on 24 May 1915, the Hamilton Spectator announced to the district that the war had claimed the first Hamilton man.

William Henry Waters, the son of Mark Henry Waters and Martha Deans of Milton Street Hamilton was born in Edenhope in 1893.  Known as ‘Harry’, he attended Hamilton State School and was working as a labourer at the time of his enlistment on 1 December 1914.  William left Australia with the 14th Battalion, as part of the 4th Brigade, on 2 February 1915.

After surviving the landing at Gallipoli on 25 April 1915, William received gunshot wounds to his lower body on 5 May and was transported to Alexandria.  He passed away from his wounds in hospital on 8 May 1915.  William was buried at the Chatby Military and War Memorial Cemetery, Alexandria, Egypt.

Back in Hamilton, William was remembered by the Hamilton State School, had a tree planted in his honour in Hamilton’s Anzac Avenue and is named on the Hamilton War Memorial

On 18 February 1916, the Hamilton Spectator published a letter sent to Williams’ mother Martha.  It was from John Mills of Hamilton who also served with the 14th Battalion.  He told Martha that ‘Harry’ and others were about to enter a trench when attacked by Turks.  Harry seemed lucid and they were sure he would pull through, so they were shocked to hear the news he had died.  John said his sergeant believed Harry was the gamest man in the platoon