Robert Henry Catterson, known as Harry, was a son of Cuthbert Catterson and Mary Jane Bell and was born in Daylesford in 1878. In 1881, Cuthbert Catterson died.  Harry attended Musk Vale State School and then Daylesford State School.  After his schooling, Harry moved to Melbourne, working as an apprentice hairdresser to Mr Roberts of Brunswick.  Around 1899, Harry moved to Maffra where he spent fourteen years running his own business.  He was a member of the Maffra Rifle Club and Gippsland Rifle Club.  His widowed mother also moved to Maffra.

About 1913, Harry moved across the state to Hamilton, opening a hairdressing and tobacconist shop in Gray Street. He joined the Miniature Rifle Club and Hamilton Rifle Club, shooting at the Monivae range.  He also joined the terrier coursing club and quickly became a well-known identity in the town.

On 7 July 1915, Harry enlisted at Hamilton at the age of thirty-seven.  He placed an advertisement in the Hamilton Spectator to announce his enlistment and tell his customer the shop would stay open while he was away. Harry’s mother took over running the shop.

Harry had one more important duty to do before his departure overseas.  On 21 July 1915,  he married Mary Gibbons of Brunswick at the St Josephs Church, West Brunswick.

Harry started his training at Seymour then Broadmeadows. On 29 September 1915, while in Hamilton on his last leave home, the members of the Hamilton Rifle Club and Miniature Rifle Club gathered to farewell Harry.  He was presented with a wrist watch, silver pen, writing pad and envelopes.  He left Hamilton by the noon train the following day. On 15 October 1915, he departed Australia aboard the Nestor A71 (below) with the 14th Battalion, 11 Reinforcement. 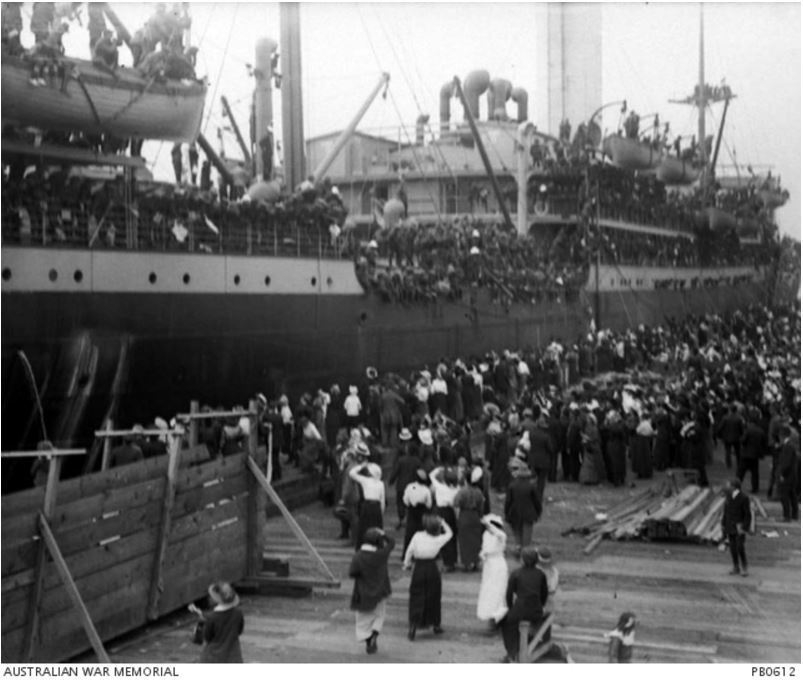 By November 11, 1915, Harry was putting his pen and stationary to good use writing a letter home about the monotonous voyage and then the arrival at Suez, Egypt. On 20 January 1916, the Daylesford Advocate published a second letter from Harry.  He continued on from his earlier letter with descriptions of Cairo, the pyramids, and the Sultan’s Palace.  On 26 April 1916, Selwyn Stewart of Kanawalla near Cavendish wrote to his mother.  He told her the only Hamiltonian in his battalion was Harry Catterson who was proving very useful, shaving the men.

While still in Egypt, Harry was promoted to Lance Corporal during March 1916. Three months later he was off to France arriving on 9 June and promoted to Corporal soon after. At that time, the 14th Battalion was at Bailleul in northern France. His skills as a rifleman saw him considered the best shot in his company and in France he was a sniper and often instructed at sniper school.  On 14 August 1916, at Pozieres, Harry was shot in the shin and went to hospital at Rouen rejoining his unit on 17 September.  By November 1916, Harry was a Lance Sergeant.

In the meantime, Harry’s brother-in-law Daniel Dunn had enlisted and his sister Annie moved to Hamilton and help with the running of Harry’s shop.

By April 1917, the 14th Battalion was at Noreuil in northern France preparing for an attack on the Hindenburg Line. On 11 April, the beginning of the first battle of Bullecourt, Harry lost two fingers.  While making his way to the dressing station he had to pass an area under heavy machine gun fire.  Despite his own injuries and the risk, he stopped to help other men.  That is when Harry lost his life.

Harry was reported as wounded and then missing but his family was only told the news he was wounded.  It was September before they learned the news he was also reported as missing on 11 April.  The last his mother Mary heard from him was a postcard dated 5 April 1917.  There was some thought, and hope, that he might be a POW.  While waiting for some news, Harry’s sister Annie heard her husband Daniel Dunn had been killed at Passchendaele on 19 October 1917. On 6 December 1917, the Hamilton Spectator published news of Mary Catterson receiving official notification her son Harry was dead.

In 1919, Harry’s shop in Hamilton was put up for sale and the following year his mother died at Camperdown.  In 1924, Harry’s widow Mary remarried to Patrick Halligan.  She died in 1968 aged eighty.

Robert Henry Catterson’s name in on the Hamilton War Memorial and a tree was planted for him along Hamilton’s Anzac Avenue on 28 June 1918.