William Boyd was born in 1898 at Colac, a son of William Boyd and Hilda Dickson. The family moved to Hamilton, taking up residence in Digby Road. William attended the North Hamilton State School until around 1911. He was a member of the Senior Cadets from around 1912 and during February 1913, he was recommended for promotion to Lance Corporal.

As soon as William turned eighteen he enlisted at Hamilton on 1 February 1916. He left for overseas on 1 April 1916 aboard the HMAT A23 Suffolk. There were a number of Hamilton boys on board and they put a message in a bottle and threw it overboard somewhere along Australia’s southern coast, a common practice among departing soldiers.  A few months later, Mr R. Campbell of Lake Bonney near the coast south of Millicent found a bottle on the beach.  On opening it he found it was the same bottle the Hamilton boys threw overboard. His wife did as the note requested and forwarded it on to the Hamilton Spectator.

The Hamilton boys eventually arrived in England via Alexandria and then were off to France and Belgium to join the 8th Battalion.  Back at home, William’s older brother Hugh had also enlisted.  The 16th reinforcement joined the battalion near Ypres, Belgium on 16 September 1916. They were in the trenches and it was very wet underfoot.  The battalion returned to France before Christmas.  They were at Mametz in January 1917 and taking part in training.  Again, conditions were wet and muddy and foot inspections were held to detect trench feet. 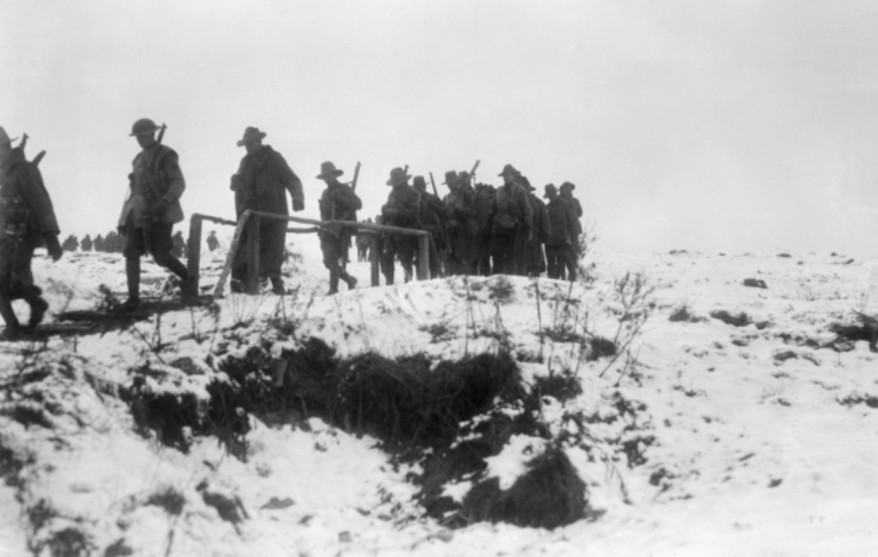 The battalion moved south and was at Warloy-Baillon on 22 January 1917, preparing to move on to Albert.  William, however, was admitted to the 36th Casualty Clearing Station at nearby Heilly with trench feet. The following day he was transported by the 25th Ambulance train to the 10th General Hospital in Rouen.  On 26 January 1917, William was transferred to England and was admitted to the 4th Southern General Hospital the following day.  On 9 March 1917, he was transferred to the 1st Auxiliary Hosptial at Harefield.

William was granted two weeks’ furlough at the end of March before returning to duty in France on 14 May 1917.  William was temporarily attached to the  Postal Corps and returned to England on 24 October.  On 14 November 1917, William wrote a letter home to his sister Mary,

When I left, England last May to join my battalion again they were out training for those big attacks that took place in Flanders. We were hard at it for three months, then they took us up north. On the morning of September 8, we went over the top, and were caught in a barrage, and got it pretty warm. Talk about guns, we had a lovely barrage of 1000 yards deep with a twenty miles’ front, so that will give you an idea of how many guns we had. We were going from six till ten in the morning, and advanced about a mile and a quarter. There was a lot of talk about those ”pill boxes,” (see below) but they only proved to be a death trap for Fritz himself, as he used to go down them to get out of our shell fire, and we were on top of him before he had time to get out and at his machine guns and rifles. We went over again on October 4th, but only went a mile that time, and had a rougher handling, as Fritz had brought up all his guns’ and 20,000 Prussians against us on an eight miles’ front. We laid under his barrage for half an hour that morning before going over. Talk about “hell,” it was let, loose that morning. At six o’clock our guns opened up, and we went over in a storm of shells and machine-gun fire, but that never stopped our boys a bit. It only made them more determined to get to their objective…it is very cold and wintry in England at present.

AUSTRALIAN SOLDIERS RESTING ON A GERMAN PILLBOX ON 26 SEPTEMBER 1917 NEAR YPRES. Image courtesy of the Australian War Memorial https://www.awm.gov.au/collection/C953203

By the time Mary received William’s letter, it was three weeks after their mother’s death at the end of January 1918.

William was back with the 8th Battalion on 8 April 1918. On 14 June 1918, William was suffering from influenza and spent a month at the 15th Casualty Clearing Station in France. Back with the battalion, on 30 July while near Racquinghem, William received a gunshot wound to the arm and neck and was admitted to the 2nd Australian Casualty Clearing Station before being transferred to the 84th General Hospital in France and then on to the Royal Victorian Hospital in Netley, England.

Back at home, the Boyd family were living in Clarke Street Hamilton and there was a tree-planting ceremony on 24 August 1918. A tree was planted for Wiliam and his brother Hugh along the Clarke Street Memorial Avenue.

On 13 December 1918, William was transferred to the 3rd Auxiliary Hospital at Dartford, spending Christmas there.

CHRISTMAS 1918 AT THE NO 3 AUXILIARY HOSPITAL, DARTFORD ENGLAND. Image courtesy of the State Library of Victoria https://www.awm.gov.au/collection/C295301

During January 1919, William was granted a furlough from 11 to 25 January but was Absent Without Leave in London on 26 and 27 January 1919. As a result, he forfeited a total of six days’ pay.  The fact he was given furlough was a sign his injuries were improving. He had some nerve damage but his wounds had healed and orthopedic treatment had returned some movement to his shoulder and neck.

William left England on 16 March 1919 on the hospital ship Dunluce and reached Melbourne on 15 May 1919.  He continued with orthopedic treatment and on 20 March 1920, he was transferred to the 11th Australian General Hospital in Caulfield.  William was discharged from the Army on 18 May 1920.  He initially returned to Hamilton and was living with his father in Clarke Street.

By 1922, William was living at 20 Thornton Avenue, Surrey Hills with his father and working as a labourer.  William died on 23 November 1923 at Surrey Hills. He was twenty-five.  In a letter found in the service record of Wiliam’s brother Hugh, it is mentioned Wiliam’s death was a result of wounds sustained during the war.

The war service of William Boyd is remembered on the Borough of Hamilton WW1 Honour Roll.