Born in 1892, Frederick Waring was a son of Murdoch Saxby Waring and  Caroline MacLeod.  Murdoch died at Hamilton in 1894 when Frederick was only two. The Warings lived in Gray Street and Frederick attended the Hamilton and Western District College.  After school, Frederick went into banking, working with the National Bank in Hamilton. 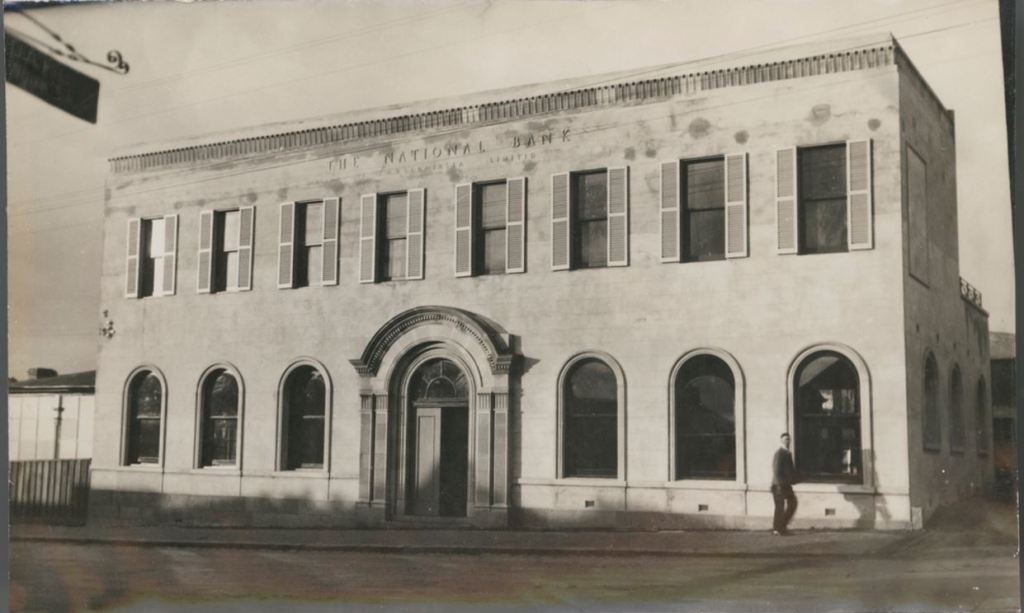 Frederick was a good tennis player and was on the committee of the Hamilton Tennis Club.  He resigned from his position at the National Bank in 1912 and joined the Bank of Australasia, taking up a position with the Drouin branch.  Frederick left Hamilton on 1 February 1912 and was given an impromptu send-off at the Hamilton Railway Station.  Fred was soon playing tennis in Drouin and joined the committee of the local club.  He next moved on to the Terang branch of the Bank of Australasia and again played tennis. He was living at Terang when he travelled to Melbourne on 4 September 1915 to enlist.

Frederick disembarked at Suez, Egypt on 15 December 1915 with the 4th Field Artillery Brigade (FAB).  While still in Egypt, Frederick transferred to the 12th FAB on 4 May 1916 remaining with them as a driver for five weeks. They arrived in France on the night of 8 June 1916.  Frederick transferred to the 24th FAB a week later and the brigade set off for the frontline at Bois Grenier near Bailleul in northern France. During September and October 1916, they were in Dickebusch, Belgium before moving back to France at Flers in early November and through December.  On 25 January 1917 while still at Flers, Frederick transferred to the 11th FAB.  They moved on to Delville Wood the following month and then on to Vaulx in preparation for the Battle of Bullecourt.

During August 1917, the 11th FAB were at Kemmel, Belgium after the Battles of Messines before moving on to Bailluel in northern France on 26 August.  They were there on 2 September 1917 when the following photos were taken.  They moved off the following day because they were moving back to Belgium for the Battle of Menin Road on 20 September. 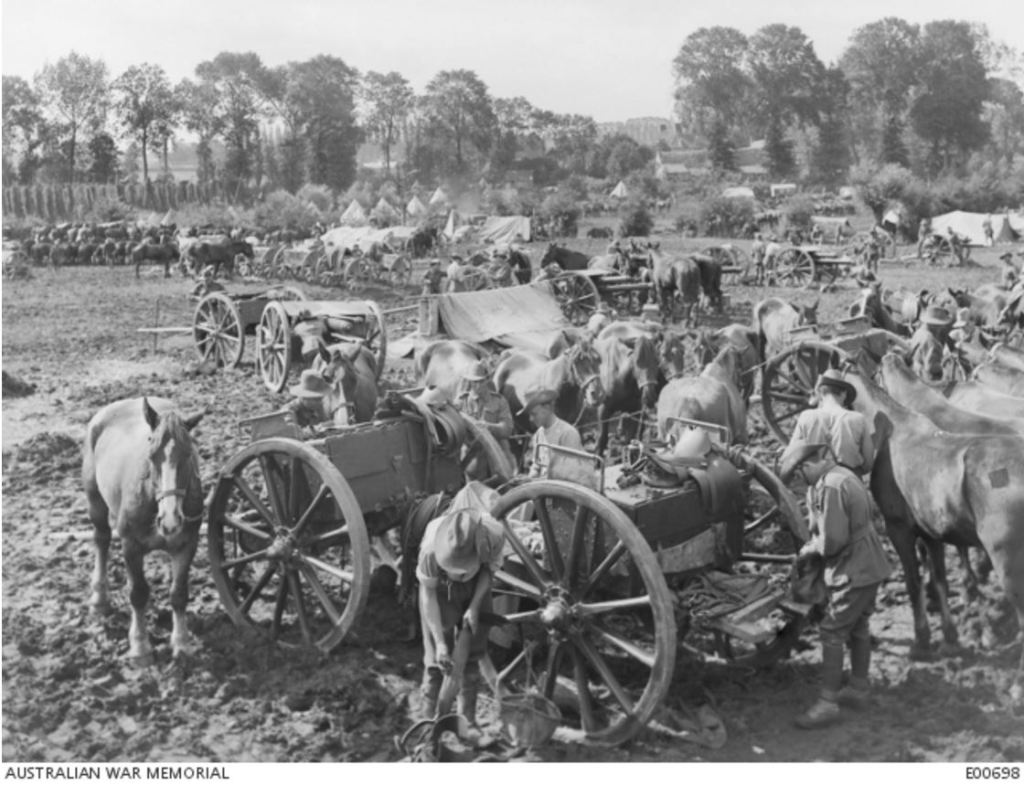 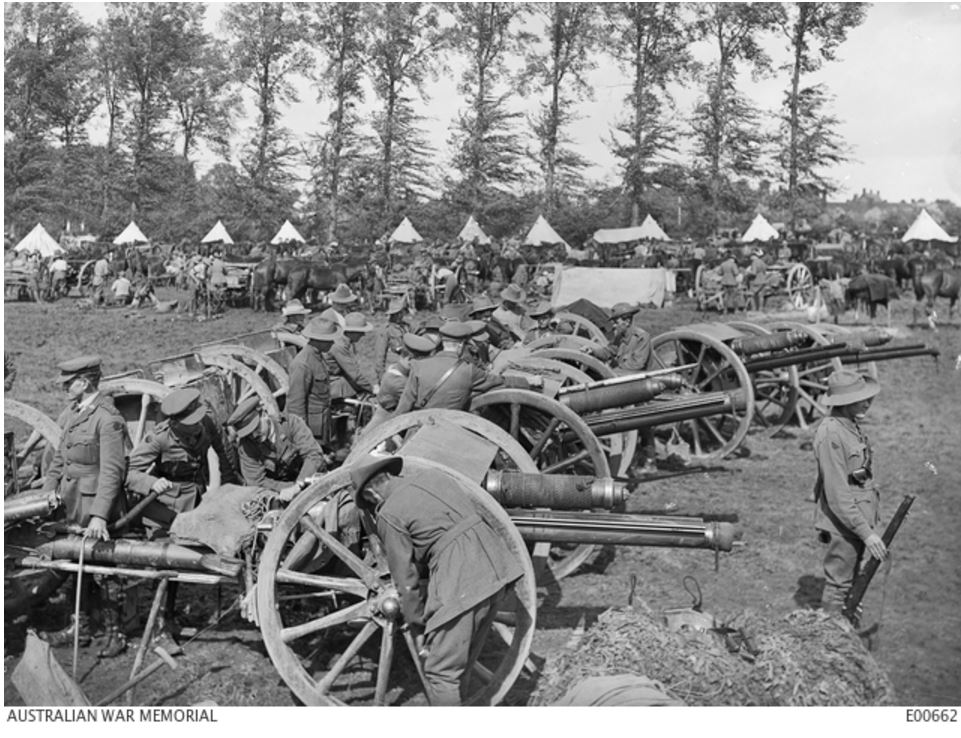 After the Battle of Hamel in July 1918, Frederick took leave to Paris before returning for what would be the Battle of Amiens in August.  By mid-October, the brigade was near Busigny but it was time for Frederick to move on.  He transferred to the Postal Corps based in London on 18 October.  In February 1919, Frederick was hospitalised with bronchitis but later discharged.  He was again admitted on 10 April with pneumonia.  Frederick became dangerously ill when his pneumonia developed into septicemia.  Frederick Waring died on 19 May 1919 at the Endell Street Military Hospital, London and was buried at the Harefield (St Mary) Churchyard (below). 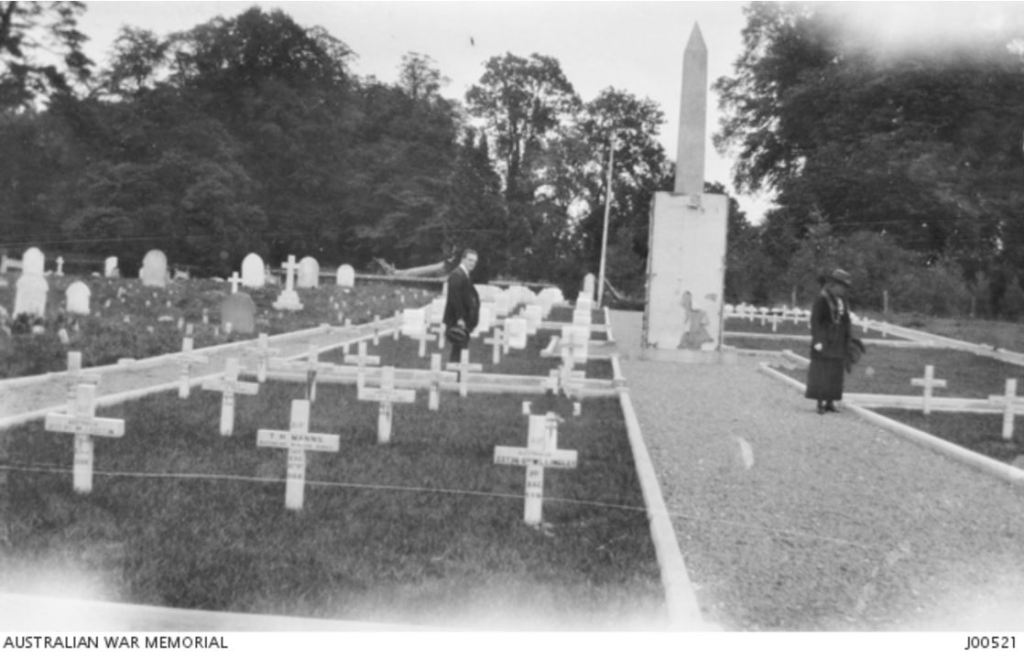 Frederick’s mother moved from Hamilton during the war and was living at Lynne in Elgin Avenue, Armadale when she heard the news of her only son.  Caroline died in 1926 aged sixty-six.