Robert Duff was born at Yarrawonga around 1894, a son of Robert Duff and Mary Burchill.  By 1905, the Duffs were living at Milltown and Robert was attending the Myamyn State School.  He was already excelling at athletics and football and when older played for the Milltown Football Club. In 1911, Mary Duff died at Condah at the age of forty-eight.

Robert joined the railways and around 1913 started as a signalman at the Hamilton Railway Station. He was popular around the town playing football for St. George Football Club where he was known as Bobby.  In August 1913, Robert was selected in a Hamilton district team to play a visiting Collingwood side with Robert kicking the first goal. While in Hamilton, Robert was a member of the Citizen Forces and he sang at various concerts. Robert left Hamilton sometime after the 1914 football season the same year his father died in Melbourne.

On 16 October 1916, Robert enlisted in Melbourne.  He gave his next of kin as his brother George then living at Hawksburn.  Robert left Australia on 16 December 1916, with the 6th Reinforcements of the 38th Battalion arriving at Plymouth on 18 February 1917. Robert went into training but during June he was AWOL for a day and received four days of Field Punishment No. 2 and forfeited seven days pay.  With his departure to France imminent, during July Robert wrote a will leaving everything to Miss Ethel May Barker of Palmer Street, Richmond.

The following month, Robert was off to France and in the field with the 38th Battalion on 2 September.  At the end of September, the battalion made their way to Belgium in readiness for the Battle of Ypres and by 2 October was just east of Ypres.

Going into the line at Passchendaele Ridge on 13 October, Robert, known as Duffy to his army mates, received a wound to his foot.  Private Harry Sheahan from his battalion went to his aid but a shell hit and killed the pair instantly and they were buried where they fell.  Robert was reported missing in action on 13 October and it was not until 6 November it was determined he was killed on 13 October.  A witness reported their bodies were seen near the duckboards at “K” Track, Ypres.

After news of Robert’s death reached Australia, Ethel May Barker, benefactor of Robert’s will came forward.  She claimed a pension for herself and a child, Eva Maud Barker, daughter of Robert Duff.  Ethel’s application as “intended wife” was rejected as she was not a dependant of Robert’s, however, a pension was approved for “ex-nuptial child” Eva who was born in 1917 at North Carlton. Further research on Ethel shows she may have met Bobby while he was still in Hamilton. Robert’s belongings were forwarded on to Ethel including photos and cards. After “discreet enquires” by the AIF, it was found Ethel wished for Robert’s medals to go to his brother George.

In 1920, Robert’s body was recovered, identified by his discs and reburied at the Tyne Cot Cemetery at Passchendaele. 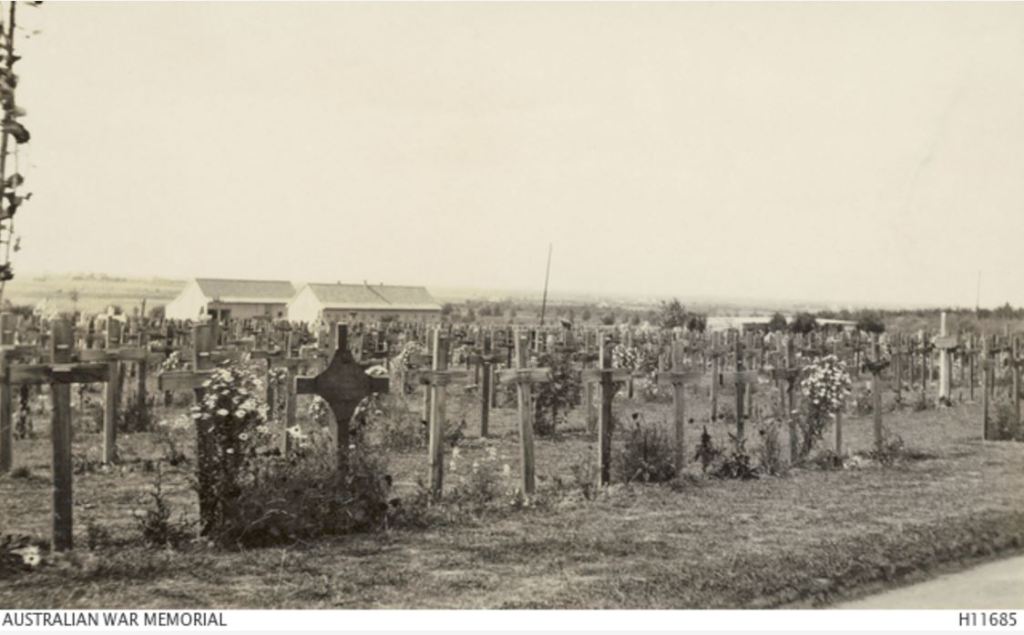 A tree was planted for Robert along Hamilton’s Anzac Avenue.