Robert Drummond was born in Coleraine the youngest of ten children of carpenter Richard Drummond and Mary Newland.  He was known as Bob. 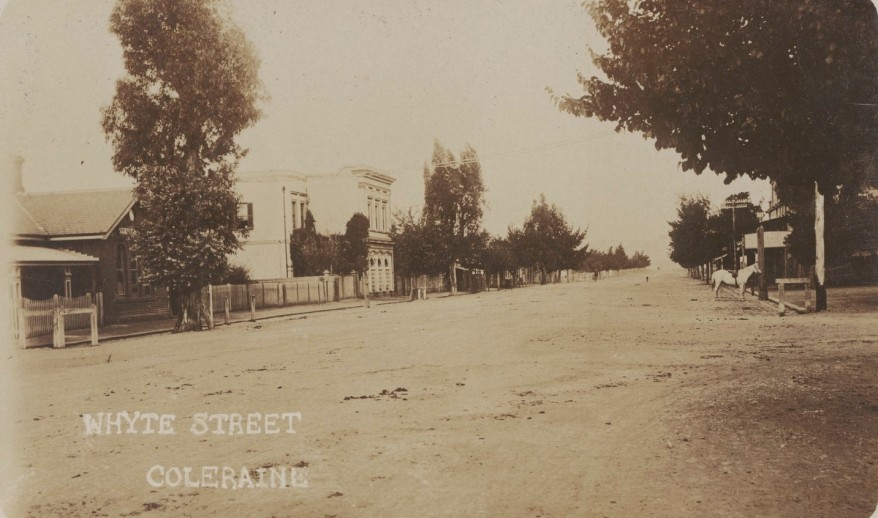 COLERAINE. Image courtesy of the State Library of Victoria http://handle.slv.vic.gov.au/10381/385977

Bob attended the Coleraine State School and then the Hamilton Elementary School. On finishing school, he got a job as a bank clerk.  In March 1917, Bob went to work at the Rochester branch of the Bank of NSW. His brother George was headteacher at the Goornong State School, south-west of Rochester. Bob was a member of the local Rochester Senior Cadets reaching the rank of Acting Lieutenant.

After just five months in Rochester, Bob enlisted on 14 August 1917 at the local recruitment office. Given Bob’s age, he required parents’ permission and provided their signatures. Also, youths could not be sent to the front until they were nineteen.  Bob obviously couldn’t wait the sixteen months to his nineteenth birthday and added ay ear to his age, giving it as eighteen years and eight months rather than seventeen and eight months.  He gave his brother George as his next of kin stating he was “under his care”.

It was another six months before he went overseas on 28 February 1918 with the 46th Battalion,10th Reinforcement. He was eighteen years and two months. While on the voyage, he disobeyed an officer and was given ninety-six hours of detention. The reinforcements arrived at Liverpool on 20 April 1918 and marched into camp at Codford that day.  While there Bon was in camp he spent about a week sit in hospital.  In July he left for France arriving on 10 July.  He spent a few days at the depot at Havre before marching out to join 46th Battalion in the field on 16 July near Amiens.

On 8 August 1918, the first day of the Battle of Amiens the 46th Battalion was east of Villers Bretonneux, France. Bob was with the A Company’s 4th Platoon were digging in near Cerisy in the Somme VAlley and Bob volunteered to go with a fatigue party to get supplies. There was heavy shelling at the time and Bob didn’t get far. He was hit in the head with shrapnel and killed instantly.  He was buried by the 48th Pioneers of the Indian Army about two miles from where he fell. A wooden cross was placed on his grave. Bob was just eighteen years and eight months.

VIEW OF THE SOMME VALLEY NEAR CERISY, FRANCE. Image courtesy of the Australian War Memorial https://www.awm.gov.au/collection/C963661

The news hit the family hard.  They hadn’t realised he was overseas. Bob had written letters on the voyage but they were not received by his family until after his death.

John’s sister Olive, a school teacher wrote several letters to General Paul Pau of France who toured Australia in 1918 including this one requesting to buy the “little spot where our darling lies sleeping”. 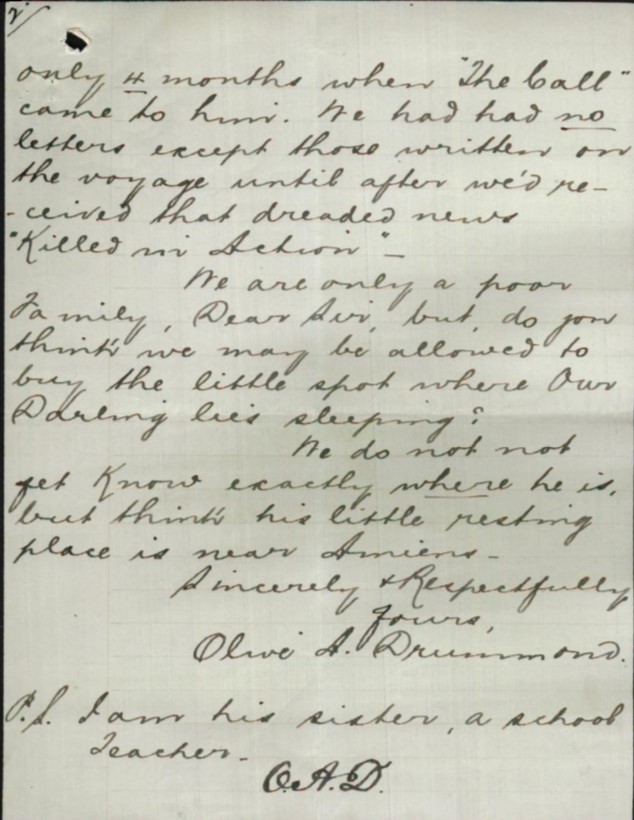 Image courtesy of the National Archives of Australia https://discoveringanzacs.naa.gov.au/browse/records/45707/17

Bob’s body was exhumed from “his little resting place” and reburied in The Heath Cemetery at Harbonnieres during May 1919.

Richard Drummond was angry his son was sent to the front before the age of nineteen. Prior to Robert enlisting, the following regulations were in place. The regulations were revised twice later in 1917.

In July 1919 almost a year after Bob’s death, Richard Drummond contacted his local member in the Federal seat of Wannon, Arthur Rodgers. Mr Rodgers contacted the Defence Department and asked for an investigation into Richard’s claim. The department simply replied since Robert had given his age as eighteen years and eight months at enlistment, he would have been nineteen years and seven months when he went to the “firing line.”  Arthur Rodgers wasn’t happy with the response and forwarded Bob’s birth certificate provided by Richard Drummond, however, it seems the Defence Department stood firm.

Robert Drummond is remembered on the Hamilton Presbyterian Chruch WW1 Roll of Honour and the Coleraine War Memorial.