John Francis was the eldest son of William Hanchet Francis and Johanne Christiane Harnath and was born at Croxton near Hamilton in 1892.  The family later moved to Yulecart and John attended the Yulecart State School.  When he was older, he joined the 11th and 20th Light Horse at Hamilton reaching the rank of Sergeant.

John was among the first enlistments from Hamilton, signing up on 21 August 1914.  As the second group to leave Hamilton, many turned out to see the men march to the station, with the Hamilton Spectator describing it as a “stirring patriotic demonstration”. Joining the 4th Light Horse Regiment, with his previous experience, John was given the rank of Corporal. While at camp at Broadmeadows he had his photo taken (below). John is on the far left.

The 4th Light Horse left Australia for Egypt where they spent time training, knowing infantry battalions would soon be facing the action at the Dardanelles.  But due to big losses during the landing at Anzac Cove, it wasn’t long before members of the Light Horse joined them and in mid-May 1915, the 4th Light Horse, minus their horses, arrived at Gallipoli.

During July, John had ear trouble and was transferred to a hospital in Malta.  He returned to Gallipoli on 24 August with the regiment just having left Lone Pine for Ryries Post (below) 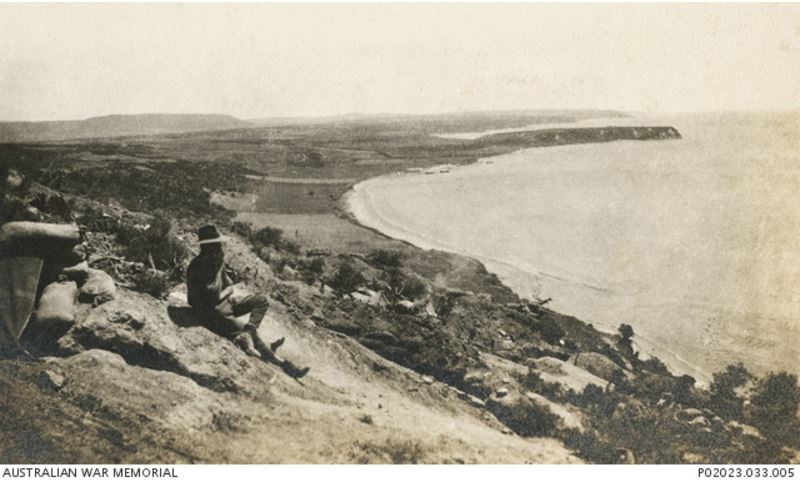 Made a provisional Sergeant in October 1915, John was promoted to Sergeant in December 1915.  That month the regiment left Gallipoli on 10 December and went to Lemnos for 10 days then on to Alexandria.

On 10 June 1916, John left for France arriving on 17 June and joined the 2nd Anzac Mounted Regiment D Squadron on 7 July.  He was transferred to the 59th Battalion on 2 September 1916 and promoted to 2nd Lieutenant.  The 59th was then at Rue de Bois, Fleurbaix. After some training and leave, John returned to the 59th on 4 February 1917 at Delville Wood, the Somme and was promoted to Lieutenant on 14 February 1917.

While at Frémécourt on 27 March 1917, John was slightly wounded but remained with the battalion.  In June, he spent time in Paris on furlough and rejoined the battalion on 22 July at the Lytham Camp. During August 1917, the 59th Battalion was located at Sercos before moving to the Steenvorde area in northern France on 17 September.

By 25 September the 59th Battalion were at Zillebeke Lake, Belgium with orders to move close to Hooge. The following day they were at Black Watch Corner and at 5:50am, they attacked the German positions at Polygon Wood. John, the Battalion Intelligence Officer. was hit by a shell, knocked unconscious and was dead in a few minutes. Witnesses thought he was buried at Black Watch Corner. It was a bad day for the 59th Battalion with forty-six other men killed and seventeen unaccounted for.

On the 3 October 1917, the Yulecart community gathered in the Yulecart hall to welcome home Private Herbert Moore.  News of John’s death had not yet reached home. A vote was held to decide which local soldier would receive a donated knitted scarf.  There was a tie with John and Private Ken Eales each receiving ninety-one votes. It was decided a second scarf would be knitted so neither soldier would be miss.  Little did they know that one scarf was needed.

It was soon after that gathering when the Francis’ were advised of John’s death.  There were several Death Notices for John in the Hamilton Spectator, including one from Maurice Tilley.  Maurice was there with John as they marched through the streets of Hamilton in August 1914 filled with a sense of adventure and patriotism.  They were both part of the 4th Light Horse Regiment and shared the experience of Gallipoli.  When John went to France they parted ways with Maurice eventually returning to Australia in September 1916.

John was mentioned in dispatches on 31 October 1917 by the Anzac Commander, Lieutenant General Birdwood for his gallant actions during battalion operations.

In 1924, John’s mother Johanne died at Hamilton and his father William in 1932.  Before then, they were able to see the name of their son John Francis on the Hamilton War Memorial.