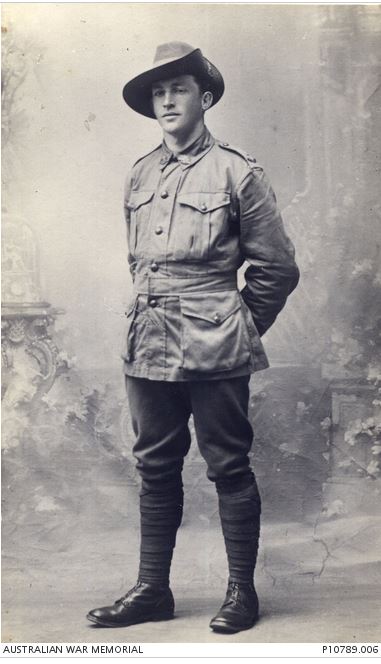 This is the sad story of a boy who grew up without a mother and went to war leaving a little boy at home who grew up never knowing his father.

Francis Stanley Tredrea was born in Hamilton in 1891 to Hamilton born parents, Abraham Tredrea and Annabella McLeod. Abraham, a tailor and Annabella were married the year before the birth of Francis, their first-born. But tragedy struck as Annabella passed away in the same year as Francis’ birth, most likely the result of the birth. Heartbroken Abraham did not marry again and raised his little boy himself.  When Francis was old enough, Abraham took him on as an apprentice tailor. In 1914 aged twenty-five, Francis married Ada Annie Walker of Stawell and they were soon expecting their first child.  On 25 July 1915,  Francis enlisted with the 21st Battalion. It’s unclear if Ada had given birth to their son, Harold Hamilton Tredrea by that time.
Soon after arriving in Egypt, Francis was transferred to the 60th Battalion and in June the battalion proceeded to France. Arriving on 28 June 1916, the battalion was thrown into the deep end with their first major battle on 19 July 1916 giving them no time to settle into trench life as they would have if they had arrived at a “quiet time.”  The battle they were thrown into was the Battle of Fromelles and the 60th battalion suffered heavily with 757 casualties. Men were wounded and dead, others were missing. One of those missing was Hamilton’s Francis Tredrea. 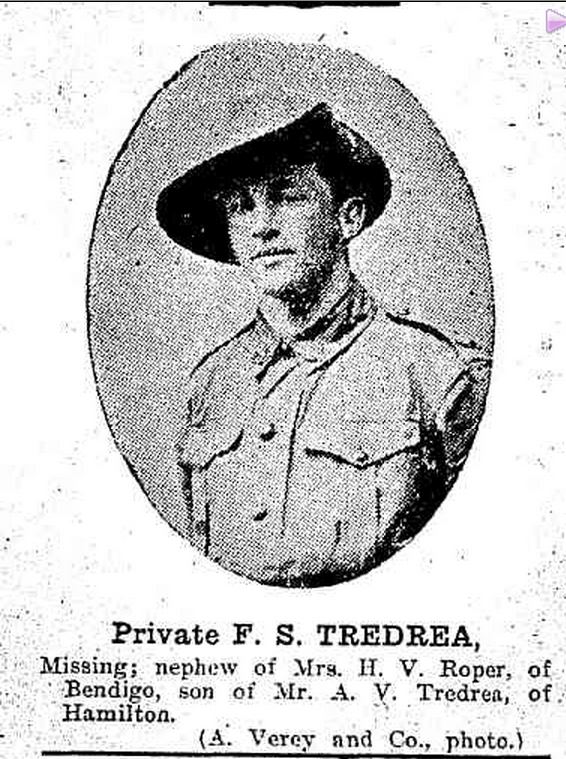 News of Francis reached Hamilton and his wife Ada and father Abraham held out hope Francis was a prisoner of the enemy. By October, there was still no news. Six months passed and his status was still “missing.” Out of desperation, in February 1917, poor Ada placed a notice in The Argus, seeking any news of Francis.

During August 1917, thirteen months after he was reported missing, Ada wrote to the Defence Department looking for answers. The Defence Department reported back the Court of Inquiry was investigating those missing. On 29 August 1917, the Court of Inquiry found Francis was killed during the Battle of Fromelles.  On 5 September 1917, Ada placed a death notice in The Argus:

On 8 September 1917,  in the “Kennel Notes” column of the Leader (Melbourne) there appeared a letter from Abraham Tredrea:

“I received word on Friday last re my son, F. S. Tredrea, saying he was killed in action on the 19th of July, 1916. You will remember he was then reported missing. I miss him very much. He was a very smart boy in the fancy, both in dogs and poultry. He was known by the Collie fanciers of Melbourne, and I am sure his friends in the fancy will be sorry to read the sad news.”

Ada and young Harold moved to Stawell where Ada remained until just prior to her death at Ararat in 1962.  She never remarried. Harold moved to Melbourne in the 1930s and married. Francis’ father Abraham passed away in Hamilton in 1932. He had suffered much loss during his life and he was finally at rest. On the second anniversary of Francis’ death, Abraham had placed a notice in the Hamilton Spectator:

His actions, though his voice is still;

Forget him, no, I never will,

Memories of his upright ways

Will linger with me all my days