Walter Henry Boxer was the youngest son of John Boxer and Maria Beaton and was born into a large family at Violet Creek, south of Hamilton in 1893.  John Boxer was a boundary rider at Violet Creek Station.  In 1897, Violet Creek Station was sold and the Boxers moved to the Wannon. In August 1899 when Walter was only six, his father died.  The Boxers lived at Rose Cottage and Walter attended the Wannon State School.  He was good at sports including cricket playing for the Wannon team and competing against teams from Hamilton.  He and his brother James were rabbiters and with rabbits overrunning the countryside, it was possible to earn up to £10 per week trapping.  If delivered to the  Hamilton Railway station, the catch was purchased and transported to the freezing works at Portland.

On 31 January 1916, Walter enlisted at Hamilton as did his older brother James on 1 March.  On 15 February 1916, with a group of men who also enlisted at the Hamilton Recruiting Centre, Walter left Hamilton on the midday train following a send-off at the Hamilton Town Hall.  From 22 February to 23 March, Walter was with the 39th Battalion D Company before joining the 57th Battalion. Walter returned home on his last leave on 28 March and was given a send-off by the Wannon locals. He left for Egypt on 4 April arriving on 8 May 1916.  In Egypt only six weeks, Walter left for England arriving at Plymouth on 23 June and from there he went into training camp at Salisbury Plains.

Writing a letter home to a friend on 22 August having just returned from leave in London, Walter told of the highlights of his trip. He had toured the Houses of Parliament and the Tower of London. On a Sunday morning, he visited the markets in Petticoat Lane. Shortly have his return to camp, Walter transferred to the 58th Battalion and left for France on 2 September, arriving at Etaples on 6 September. Walter joined his battalion in the field at Fromelles on 21 September 1916.  On that day, sixty reinforcements arrived to support the battalion  The 58th had gone through a horrendous time at Fromelles in the two months earlier and numbers were depleted.  Appointed as a stretcher-bearer, Walter went straight into the trenches and faced his first heavy enemy attack on 22 September.

On 25 October 1916, Walter fell sick with bronchitis and hospitalised until 10 November, not joining the battalion again until 7 December, then at Montauban, France.  The 58th Battalion moved to Delville Wood near Longueval, France in January 1917.  The terrible conditions at the time seen in the photo below. 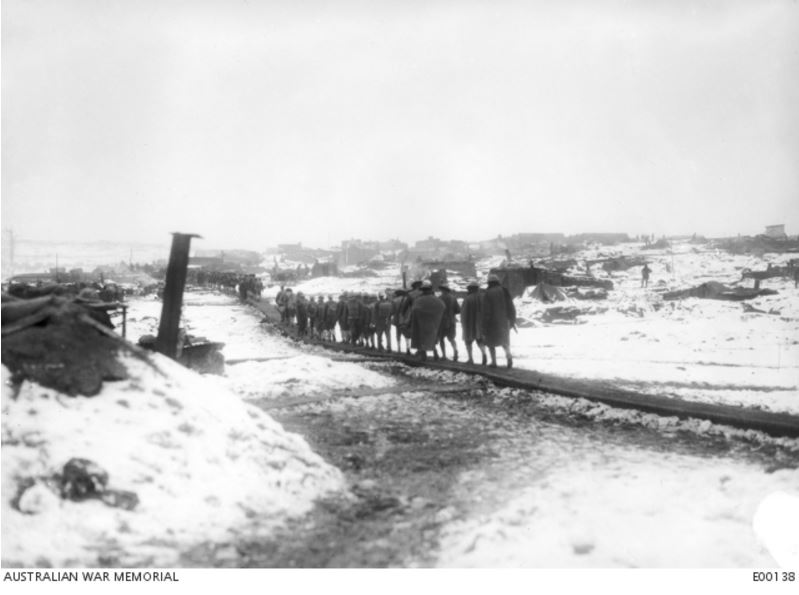 On 25 February 1917 while still at Delville Wood, Walter received a gunshot wound to his left shoulder and was transferred to an English hospital. News broke in the Hamilton Spectator on 23 March of Maria Boxer having heard the news of her son’s injuries.  While in hospital, Walter took the time to write to his sister in Maryborough. 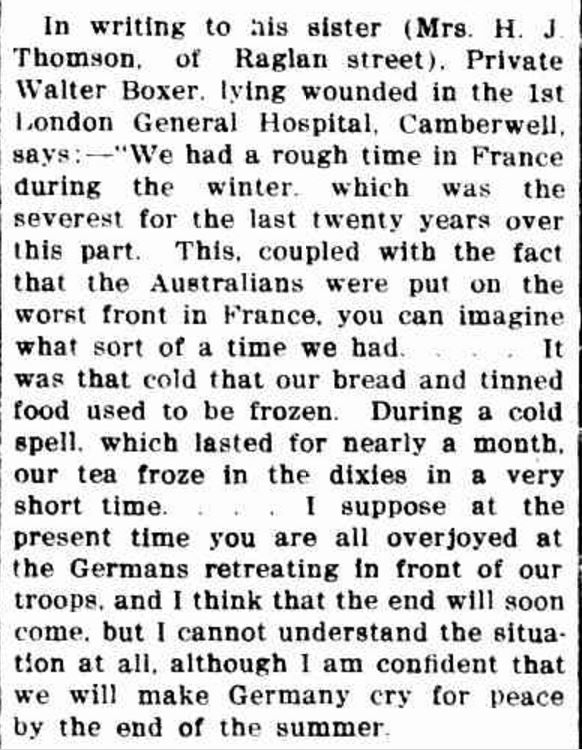 Walter remained in hospital until 21 April, returning to his battalion at Contay, France on 21 June. By August the Battalion had moved further north to Sercus.  They remained there until 23 September when the battalion arrived at Polygon Wood, Belgium and moved into the trenches until the end of the month.  Back into camp in October, the battalion received orders to move to the frontline on 8 October and they arrived at Westhoek Ridge, Belgium. Walter was again wounded on 16 October while at Westhoek Ridge but was able to stay on duty. On 5 November, Walter was promoted to Lance Corporal.

Two days later on 27 April, the 60th Battalion was in the frontline and suffering great losses.  Walter asked permission to set up relay posts to move wounded men from the 60th Battalion out of the frontline.  He implemented a system and as a result, many wounded men were rescued that night.  Despite a wounded foot, Walter continued on until the 58th Battalion was relieved. For his actions on 25 April and 27 April 1918, Lance Corporal Walter Boxer was awarded a Military Medal. 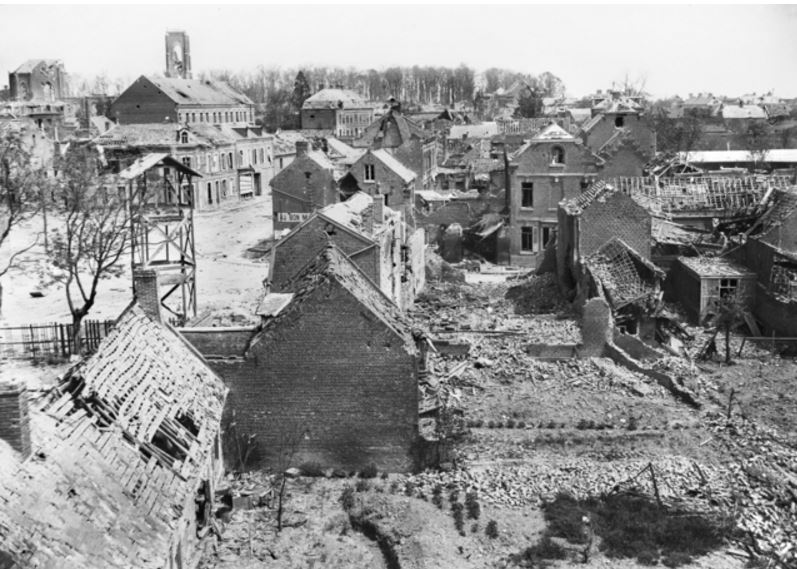 THE VILLAGE OF VILLERS-BRETONNEUX AFTER THE FIGHTING OF APRIL 24 & 25, 1918. Image courtesy of the Australian War Memorial. https://www.awm.gov.au/collection/E02154/

By 19 June 1918, the battalion was near Dernancourt, France.  At 1:00 am on 20 June, Walter was part of a raiding party as a stretcher-bearer. He was slightly wounded by a stick bomb but continued carrying out the wounded after their retreat, amid heavy shelling. Later, he and another stretcher bearer were part of a patrol searching for a member of the raiding party, Private Patrick Farrell who had not returned.  The patrol came within metres of the enemy trench but was unable to find Farrell. He was later found safe.  During the raid and later patrol, Walter’s actions “set a fine example to his comrades.” He was recommended for and later awarded a bar for his Military Medal.

By August 1918, the 58th Battalion had once again moved into Belgium and on 2 September were involved in the capture of the village of Perrone.  Again Walter was in charge of stretcher-bearers and at 5:00 am the battalion passed through the town. At 5:30 am, the enemy bombarded the town with gas and shells resulting in many casualties within the battalion.  Walter found two men who required assistance and took off his gas mask to dress the wounds and help them to the dressing station.  He returned to the barrage, rescuing two more men.  Walter then moved to the outpost line and despite heavy machine-gun fire, helped more men to the dressing station.  On his fifth trip, Walter was wounded but unlike previous occasions, he could not go on having received severe wounds to his legs, arms and face. Walter’s demonstration of bravery at Perrone, without thought for his own safety saw him nominated for a Distinguished Conduct Medal (DCM), a nomination he had received three times before.

THE VILLAGE OF PERRONE, BELGIUM AFTER THE ATTACK ON 2 SEPTEMBER, 1918. Image courtesy of the Australian War Memorial https://www.awm.gov.au/collection/E03151/

On arrival at the dressing station, it was found the worst of Walter’s injuries was his right arm.  He had a compound fracture of the right humerus and both bones in his right forearm. It was necessary to transfer him to England on 7 September 1918 where he was admitted to the General Military Hospital at Edmonton. On arrival at the hospital, amputation of Walter’s arm was considered and his service records at one point show that did occur, although rectified further on. Walter did undergo an operation to remove bone from his arm.  As an asthma sufferer prior to enlistment, something he did not reveal at his medical, the effects of gassing were also causing problems for Walter. While in hospital at Edmonton, Walter received a letter from his battalion’s commanding officer advising he’d been awarded a DCM and enclosed a DCM ribbon which Walter immediately displayed proudly.

Once stabilised, Walter was able to return to Australia on 13 December 1918 aboard a hospital ship, arriving in Melbourne on 29 January 1919.  He was then admitted to the Caufield Military hospital. On 23 April, Walter received notification he would receive his Military Medal and bar on 1 May 1919 from the Governor-General Sir Ronald Ferguson at the Domain Camp, Melbourne. At the time Walter was confused because there was no mention of the DCM he had heard about while in England. He wrote to Base Records concerned he was wearing the ribbon without merit. The reply was there was no indication of him having been awarded a DCM, but if he were to receive one, his mother would be notified.  In April 1920, Maria Beaton received notification from the Defence Department that Walter had in fact received a DCM. On 28 September 1920, Walter was discharged from hospital.

In 1922 Walter was living in Bendigo and working a clerk.  The following year he married Isabel Willis and soon they welcomed a son Keith Willis Boxer.  Walter continued work as a clerk and the family resided at 10 William Street Malvern.  By 1927, Walter had contracted tuberculosis and he died at the Caulfield Military Hospital on 16 June 1927 aged thirty-four. He was buried at Boroondara General Cemetery.

After Walter’s death, Isabel moved to the home of her parents in Malvern and then to Pattison Street, Moonee Ponds in the early 1930s. When WW2 arrived, Walter and Isabel’s son Keith enlisted in 1943 and served as a signalman until his discharge in 1946. After the war, Keith studied to become an accountant and remained living with his mother in Moonee Ponds. In the 1950s, Keith married and moved to Elsternwick.  Isabel Boxer died in September 1963 at Essendon and was buried with Walter at the Boroondara General Cemetery.