Fanny Harris was born in Maryborough in 1892, the youngest child of Charles Harris and Fannie Cove.  Charles was an Anglican Vicar and Rural Dean of Maryborough.  He was appointed as Canon of the Christ Church Cathedral Ballarat and the family moved there before his appointment as Anglican Vicar of Hamilton and Archdeacon of the Grampians in November 1906.  They moved to Hamilton and took up residence in the Christ Church Vicarage in Gray Street (below) 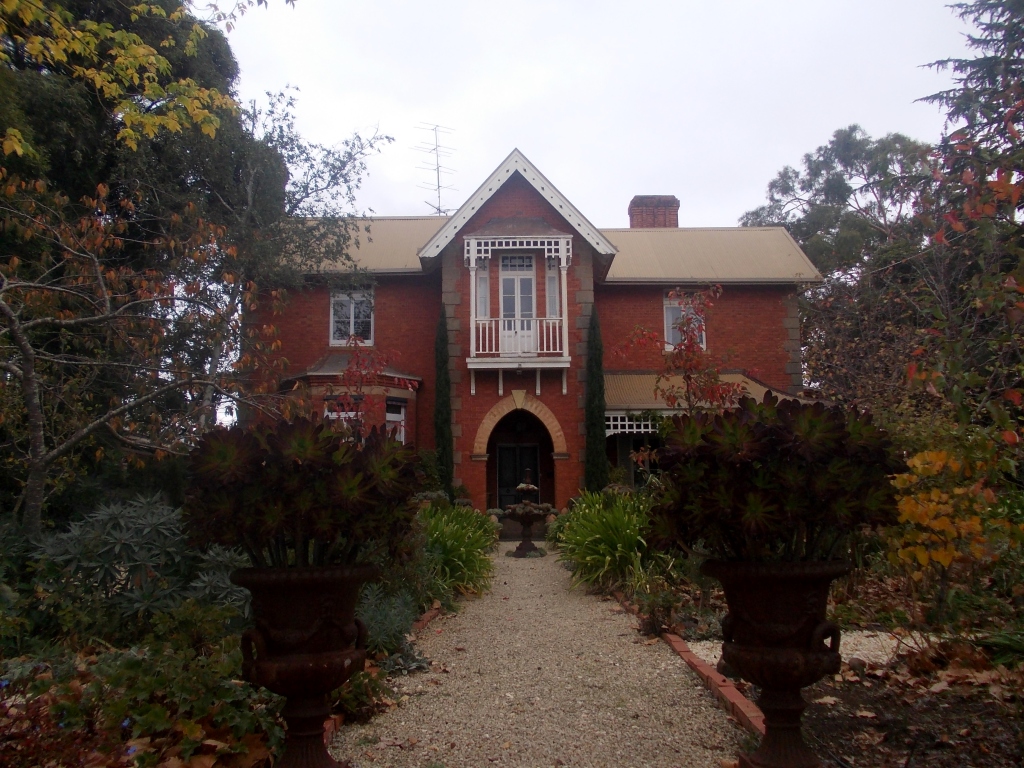 When Fanny was sixteen in 1908 her mother died aged fifty.  On 19 October 1909, her father remarried to widow Emily Osborne.  Emily had a son Percy Osborne three years younger than Fanny.  Fanny attended Alexandra College where she was introduced to the study of physiology by teacher and later principal of the college, Florence Laidlaw. Fanny decided to pursue a career in nursing and began her training at Warrnambool Hospital.  On completion in 1914, Fanny took a trip to Sydney to visit her aunt. By that time, the war had started and Fanny accepted placement at the Randwick Military Hospital as a Nursing Sister.

At the age of twenty-four, Emily was one of twenty volunteer applicants selected to serve as a Red Cross nurse. The Australian Jockey Club (AJC) sponsored the nurses’ pay and their uniforms donated by retail store David Jones Ltd.  Their blue uniforms saw the nurses nicknamed “Bluebirds”. The French-Australian League of Help donated each nurse with a leather kit bag.  The NSW Premier arranged for the Education Department to allow a French language teacher to go with the nurses to give language lessons during the voyage. Miss Nian from the Newcastle High School was selected.  The Defence Department paid their passage to France on a troopship.  Prior to departure, they were given a farewell at Government House in Sydney (below), hosted by Lady Edeline Strickland.

The Red Cross nurses departed on 4 July 1916 aboard the HMAT Kanowna. 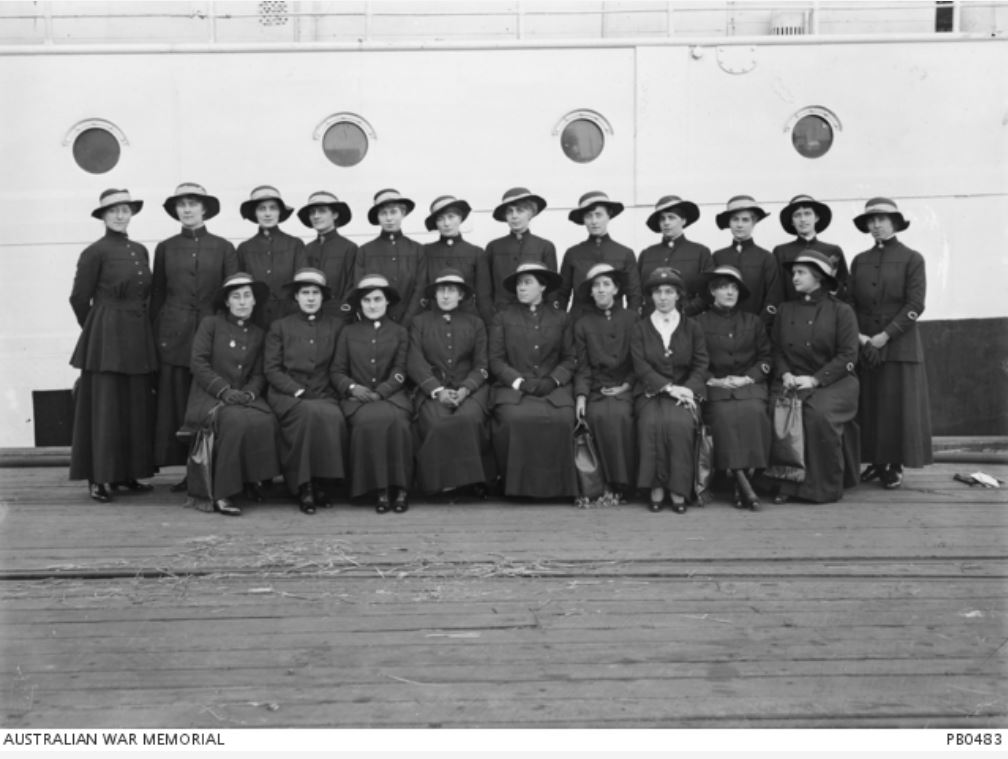 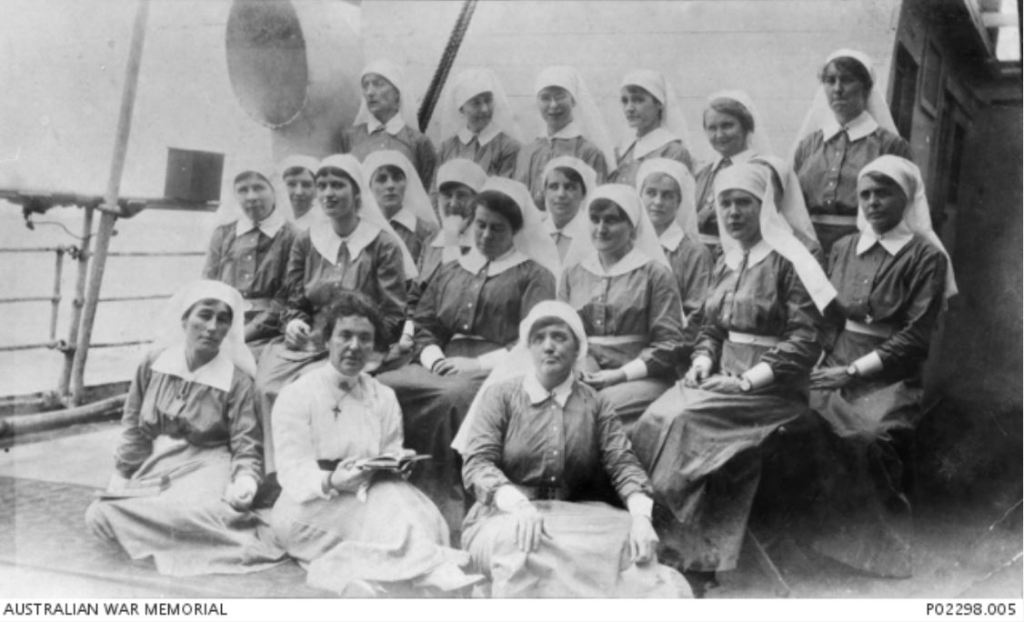 RED CROSS NURSES ON THE DECK OF HMAT KANOWNA 1916. FANNY HARRIS IS BACK ROW, THIRD FROM LEFT. Image courtesy of the Australian War Memorial https://www.awm.gov.au/collection/C306192

Once in France, the “Bluebirds” were sent to several different hospitals and Fanny found herself in Amiens.  By June 1917, she was at Henencourt. The Warrnambool Standard published a letter from Fanny while at Henencourt.  Written on 14 July, Bastille Day, she described a visit to Henencourt by King George V on 12 July.

Today is a great day in France, the same as 4th July is to America. Flags are flying everywhere. Last Thursday we had a very wonderful day. We saw the King of England reviewing the Australian troops. It. was a’ great sight. The royal salute was most impressive. I was terribly proud of our Australian boys. Of course, we were the only girls there, and we noticed the King looking at us, and a few minutes later a message was sent down to say that the King wished us to be presented to him. Of. course, this was a great shock. However, we mounted the stairs to the Royal Box in fear and trembling. The King shook hands, with each of us, and talked to us for about ten minutes. Then before we came away he shook hands again, but as long as I live I shall never forget going up those stairs, with all those thousands and thousands of troops looking at us.

The photos below shows King George’s visit to Henencourt with General Birdwood.  They were watching Australian troops take part in a sports meeting. Nurses are just beside the Royal box.

The following photo shows nurses in the Royal box as described by Fanny.  One nurse is obscured and it’s likely it is Fanny.  King George appears to be looking at that nurse.  We will never know if Fanny mentioned her Hamilton connection as the King may have recalled his overnight stay in the town in 1881 as a sixteen-year-old when he toured with his older brother Prince Albert.

Fanny’s service was over at the end of the war and she returned to Australia on 28 February 1919 on HMAS Anchises.  In the same year, Fanny received a British War Medal and a Victory Medal from the French Red Cross British committee. As the nurses were not part of the AIF, they didn’t receive Australian medals or other benefits given to the Australian military nurses.   Fanny returned to New South Wales as her father had taken up residence at Beecroft in Sydney.  Fanny continued nursing and never married.  In 1929, she took a trip to England and in 1934, Charles Harris died in at Rose Bay, Sydney aged eighty-seven.  Fanny lived at Woollahra  Sydney’s eastern suburbs and continued nursing.  In the late 1940s, she spent time nursing in Gosford before returning to Sydney.  Fanny died in 1964 at St Leonard’s, New South Wales aged seventy-two.

Rogers, Irene (2017). “Breaking bread with the dead: the Australian “Bluebird” nurses of World War One seen through the lens of microhistory”