James was the only son of James White and Bridget Quigley and was born in Coleraine in 1893. The family lived at Den Hills, north of Coleraine where James White Sr’s parents settled on arrival from Ireland. In 1900, the family left Den Hills after several poor seasons and took up residence on Digby Road, Hamilton.  In 1913, James White Sr. died aged seventy.

James White worked in sales for Strachan, Millane, and Sullivan Pty Ltd, one of Hamilton’s large department stores.  From 1915, he was part of the Hamilton Rifle Corps.  James enlisted at Hamilton on 3 February 1916. By 9 February, by the midday train, James and a large group of men left Hamilton for camp at Ballarat. Earlier they received a send-off in front of the Town Hall by the Mayor then marched down Brown Street to the Station accompanied by the Hamilton Brass Band.

The reinforcements arrived at Suez on 14 May 1916 and then left for England arriving on 12 June.  They arrived in France on the 30 August 1916 and joined the 8th Battalion on 10 September near Ypres, Belgium, and went straight into the trenches. The 8th Battalion soon returned to the Somme and by 1 November 1916 were at Mametz France, making their way to Pommiers. On 3 November, they were in Switch Trench near Flers; the weather was wet, and they were facing heavy shelling and men were feeling the effects of exposure.

On 6 November James, with C Company, was digging a “hop-over” trench.  They had started the dig at 10:00 pm and would stay there until 4:00 am. James had just climbed out of the trench and was helping a mate out when a sniper shot James through the head.  He was buried close by near an abandoned German operating theatre but his body was never recovered.

Bridget White received a knock on the door of her Digby Road home on Saturday 2 December 1916. Before her was the local Catholic parish priest, Father Shanahan.  Her heart must have sunk, knowing he would have bad news about her only son. 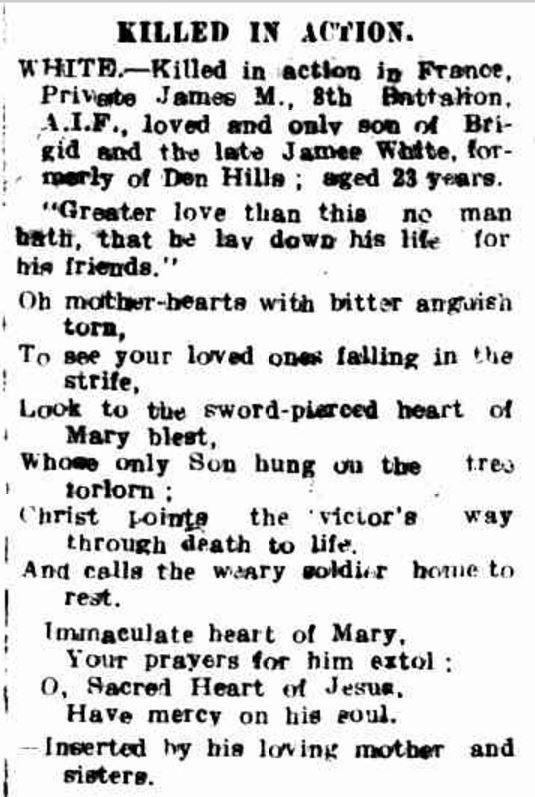 For at least the next two years. Bridget White placed “In Memoriam” notices in the Hamilton Spectator for James.  She died just six years after her loss in 1922 aged sixty-six.

A tree was planted for James along Hamilton’s Anzac Avenue and his name is on the Hamilton War Memorial.