Born in Macarthur in 1894, Albert Edward Sheehan was one of ten children born to Dennis Sheehan and Clara Jessica Malkin.  Of six boys and four boys, he was among the younger children of the family.  During the 1890s, Dennis Sheehan worked as a mining contractor and in 1899 was at the Bar One Mine, Dargo near Omeo.  He was blasting in the mine on 26 September when a stone flew up and hit Dennis in the temple. He was dead by the time he reached the surface.   Albert was five.

Albert went to school in Macarthur but later moved to Hamilton and was living with his sister in Lonsdale Street and working as a baker.  That’s where he resided when his mother Clara passed away on 2 July, 1914. Clara was spared the knowledge that her six boys would all enlist in a war that was about to break. Two of the boys were rejected and four  accepted, including Albert on 12 September 1914.  Albert went with the 14th Battalion, D Company on 22 December 1914 to Egypt.

Albert was at the landing at Gallipoli on 25 April 1915 and in the three weeks after he was involved in heavy fighting which he described in a letter home:

An interesting letter has been received by a friend from Private Albert Sheehan, the second boy to volunteer from Macarthur. It was written from Gallipoli in May, and stated that he had been in the firing line for three weeks without receiving a scratch. He added that he was enjoying the life, although he had witnessed sights that would never be effaced from his memory. (Hamilton Spectator, 29 July 1915)

By the start of August 1915, there were just three men left in a tent once sleeping thirteen, including Albert and two other Hamilton men, Arthur Lewis and Claude ‘Dot’ Douglas.  That would soon change after the 14th Battalion’s role in the Battle of Hill 971 on 8 August 1915.  Albert was reported missing and after an inquiry it was determined he was killed.  A friend from Hamilton, John Mills of Clarke Street provided evidence for the inquiry.

Image Courtesy of the National Archives of Australia. Series B2455 Barcode 8081439 http://discoveringanzacs.naa.gov.au/browse/records/366065/39

It was a month before family at home learned of Albert’s death and the news was published in the Hamilton Spectator on 6 February 1915. 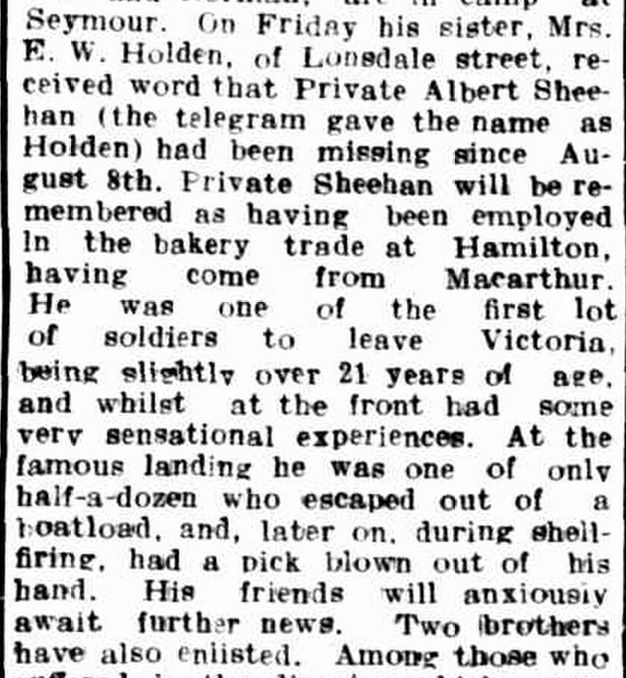 A tree was planted for Albert Sheehan along Hamilton’s Anzac Avenue.  He is also listed on the Macarthur and District Honour Roll and Macarthur War Memorial.