William Thompson was born in Horsham in 1889, the son of railway employee John Henry Thompson and Isabella Norton.  John was a roadmaster with the railways and the job required the family to move often.  Before arriving in Hamilton around 1913 and residing in McIntyre Street, the Thompsons had lived in Albert Street, Ararat and had a short stay in Hawthorn around 1912.

At some point, possibly when the family moved from Ararat to Hawthorn, William Thompson moved to Hopetoun were he worked for Cust &  Sons at the Beulah and Hopetoun stores.  With the  company for three years in the boot and shoe department, he was a bootmaker and managed the department at Hopetoun.  He was also Captain of the Hopetoun Rifle Club for three years and was foreman of the Hopetoun Fire Brigade and one of the brigade’s first members.

William enlisted at Broadmeadows on 4 August 1915 but did not leave for overseas until 1 April 1916.  He was with the 6th Battalion and they disembarked at Plymouth on 12 June 1916.  Still in England on 24 January 1917, William was promoted to Corporal.  Finally he left for France on 19 June 1917, over twelve months after departing Australia.  William reached the 6th Battalion on 28 June as the battalion moved to Baisieux in northern France where they continued training.  On 12 July, the battalion lined the Amiens-Albert Road near Lavieville for review by His Majesty King George V and Lieutenant General Birdwood.  The men were four deep and included other Australian battalions along with New Zealanders.  They gave His Majesty a rousing cheer.

On 18 September 1917, William was near Hell Fire Corner along Menin Road, marching to the frontline. 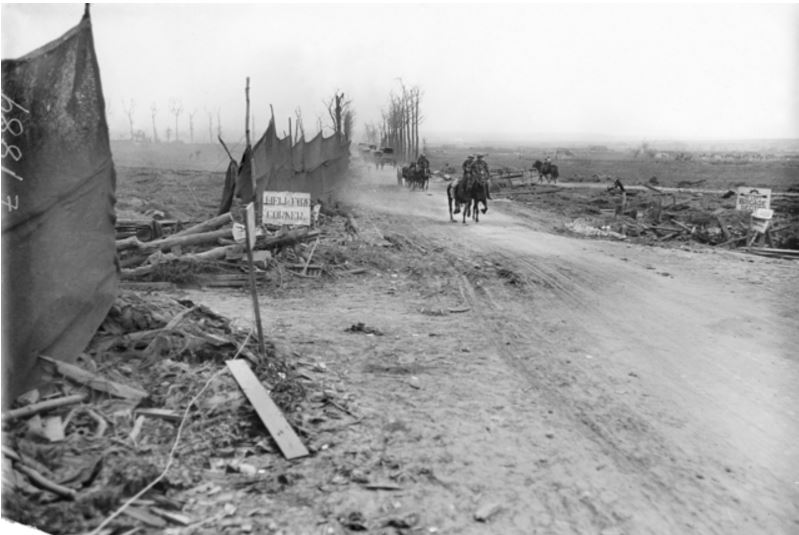 A shell exploded in front of his section, killing William and half of the men around him. Private Edward McGain lay wounded next to William, lying there for half the night waiting for a stretcher bearer. He was unaware William was dead until help arrived.

The Thompsons eventually moved from Hamilton, first to Bendigo then Ballarat.  On retirement in the 1930s, John and Isabella Thompson moved to Malvern East.  John died on 24 April 1948 aged eight-six and Isabella died two months later, on 24 June 1948 aged eighty-four.

A tree was planted for William Thompson during 1918 along Hamilton’s Anzac Avenue and his name is on the Hamilton War Memorial.