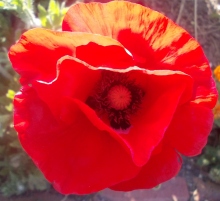 Alfred Dohle was born at Tahara in 1887, a son of Hermann Dohle and Ernestina Sawert. He attended the Tahara State School and then followed his father into farming. He had plenty of ploughing experience, entering competitions from as young as thirteen.  He moved around, living at Edenhope in 1912 and in 1914 was working as a labourer at Moutajup.

At the end of 1914, Alfred enlisted and joined the 13th Australian Light Horse Regiment.

The regiment arrived in Egypt on 29 June 1915. On 4 September they boarded the Megantic to Mudros before landing at Gallipoli in the early hours of 11 September. The remained there until the evacuation in December 1915 before spending time at Mudros.

The regiment arrived back in Alexandria in January 1916.  During March, the 13th LHR was split up and the B Squadron went with the 4th Infantry Division as the 4th Division Cavalry. With the move, Alfred was  promoted to Lance Corporal.  It was then on to France and the 4th Cavalry arrived at Marcelles on 16 June 1916.

After a month in France, Alfred fell ill. He was taken by the 13th Field Ambulance to the 12th Casualty Clearing Station (12th CCS) at Hazebrouck and admitted with tonsillitis on 12 July 1916.  His condition did not improve and he died of pneumonia on 30 July 1916 at the 12th CCS.

News of Alfred’s death reached home and soon after his older brother Edmund enlisted . He was killed on 4 October 1917 during the battle of Broodenside.

It was a tradition of the Mount Gambier Racing Club that the winning owner of the South-Eastern Steeple at the Winter Steeplechase donate a shield to hang in the racing club’s members’ room.  Edmund’s horse Skyline won the race in 1915.  Since Edmund and Alfred both lost their lives, in 1918 the racing club purchased a shield in memory of the brothers.