Alfred Parr was born around 1894 in Nottinghamshire England.  His parents had a further two children, Archie and John before their father died.  Elizabeth Parr remarried to Charles Newbon and the family moved to 72 Pinfold Gate, Loughborough in Leicestershire.  Alfred attended the Emmanuel Boys School then worked as a foundry labourer.  When Alfred was about nineteen, he decided to travel to Australia.  Victorian shipping records show a factory worker, Mr A. Parr aged nineteen arriving in Melbourne on the Port Lincoln on 4 March 1914.

It appears Alfred went to the Western District after his arrival to work on the land, possibly at the property of William Hallam near Cavendish.  Around a year after his arrival in Australia, Alfred travelled to nearby Hamilton and enlisted on 3 March 1915.  Six weeks later he departed Australia for Egypt with the 7th Battalion, 5th Reinforcements.  The reinforcements reached the battalion at Gallipoli on 17 June 1915 with Alfred assigned to B Company.

On 18 July 1915, a wounded knee saw Alfred transferred to a hospital in Malta.  He was able to return to the battalion at Gallipoli on 9 September at Lone Pine. Much of October and November 1915 were spent training at Mudros on the island of Lemnos, before the battalion returned to Anzac Cove on 26 November. The following week, during the last throes of the Gallipoli campaign, Alfred was promoted to Lance Corporal.

Back in Egypt, Alfred transferred to the 14th Australian Infantry Brigade Headquarters at Tel El Kabir and stayed for three months.  In June, he arrived at Marseilles, France before transferring to B Company of the 59th Battalion, joining them on 7 August 1916 just south-west of Fromelles. In late August, he spent a week at the 15th Brigade Grenade School followed by more training in September and October with the at 5th Division Grenade School.  On completion, Alfred was promoted to Corporal on 15 October 1916.  He was granted leave, and departed on 30 November and returned on 19 December with the battalion at Ribemont, France.  During that time, Alfred was promoted to Sergeant.

At the end of June 1917, Alfred went to the 15th Training Battalion in England. Maybe then he could visit his mother in Loughborough.  He returned to the battalion on 19 November 1917 at Lindenhoek Camp in Belgium.  By the end of the month, they were off to Messines, Belgium to relive the 55th Battalion in the front line.  During April 1918, the 59th Battalion was near the Somme Canal and preparing for an attack on Villers-Bretonneux on 24 April in the area below.

NEAR VILLERS-BRETONNEUX.
Image courtesy of the Australian War Memorial https://www.awm.gov.au/collection/E05402A/

At 9:23 am, the 59th Battalion was given the order to move forward.  Over the next twenty-four hours, Alfred displayed immense bravery.  Firstly, he organised and led an attack on an enemy machine gun.  He then led a bombing party on houses near the village of Villers-Bretonneux.  The party went on to capture two enemy officers and fifty from other ranks as well as a machine gun.  At dawn on 25 April, he went on a reconnaissance to assess the enemy’s attack. Throughout that time, Alfred “showed the greatest courage and set a fine example”.  Brigadier General Pompey Elliot of the 15th Brigade recommended Alfred for a Distinguished Conduct Medal by.  The recommendation was passed on 10 May 1918.

The battle took a toll on lives and emotions.  Fighting beside Alfred was a lad from Maffra, Private Charles Forster.  During the battle, after reaching an objective, Alfred noticed a group of men he soon realised were Germans.  They fired at Alfred only to miss him and instead hit nineteen-year-old Charles in the forehead. Alfred took the time to write to Charles’ mother in Maffra. Although he was just twenty-four himself, Alfred thought of Charles as a boy. He told Mrs Forster, Charles had shown him photos of her and his siblings in the week before Charles was killed. He continued,

On 1 May 1918, Alfred was promoted to temporary Company Sergeant Major and by the start of June, the battalion was located near Frechencourt in northern France.  During August they were part of the Battle of Amiens on 8 August. While fighting near Peronne during September 1918, Alfred was promoted to 2nd Lieutenant.  They then moved to Bellicourt north of St Quentin for what would be the 59th Battalion’s last major battle of the war.  On the morning of 29 September, the battalion rose at 4:30 am, followed by a good breakfast at 5:30 am.  At 6:00 am the American attack began and it was 6:45 am when the 59th Battalion started a move forward with Alfred was in charge of D Company. 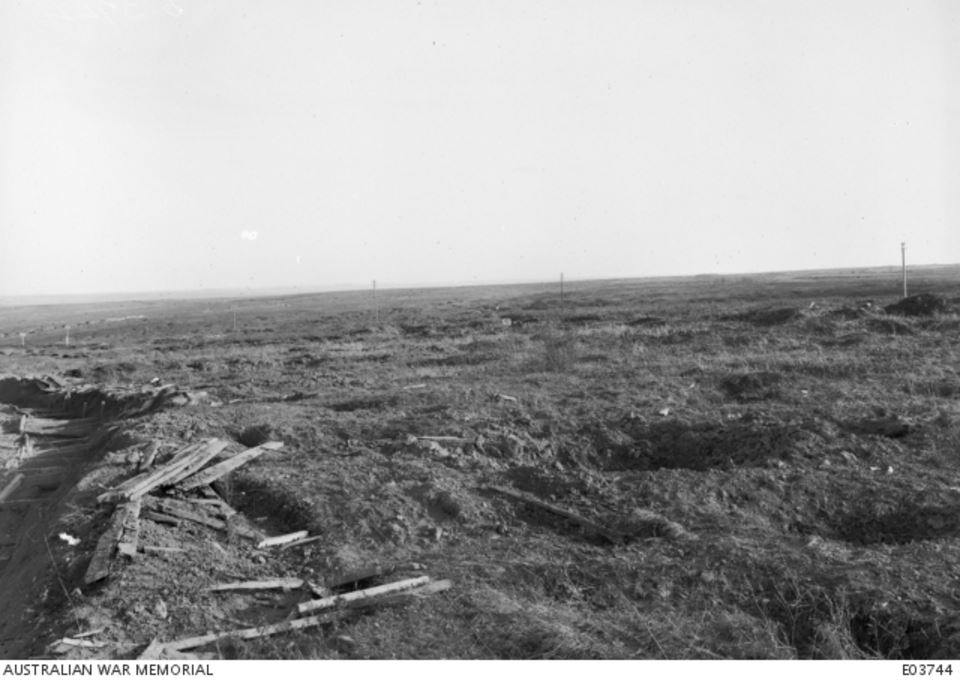 There was heavy fog and they moved some way before they met with resistance.  Taken by surprise and with the fog still lingering, they soon became disorientated.  Alfred led a group forward to the left of the advance. At 10:50 am, he got a message out to headquarters.  It said, “Am in trench at foot of slope. B Company on right.  Germans in the same trench on left. Am engaging them with rifle grenades. Pineapples (bombs) being fired from unknown position.”  This was the only message received from Alfred by headquarters that day.  It was soon after he was seriously wounded.  Alfred was taken by stretcher to the 14th Brigade Aid Post but died within minutes of his arrival.

On 13 March 1922, William Slater, Hamilton resident and the member for Dundas in the Victorian Legislative Assembly, wrote to the Secretary of Defence at the Defence Department about Alfred’s personal belongings stored in a trunk at the home of one of Alfred’s friends in Victoria. Those friends were possibly the Hallams of Cavendish. William was enquiring if there was a possibility the department could return the trunk to Alfred’s family in England.  The department replied they would only cover the cost of Bibles, photographs or religious emblems.  It is unknown if Alfred’s trunk ever made it back to Loughborough, Leicestershire and his grieving mother Elizabeth.

Alfred Parr is remembered on the Hamilton War Memorial.