Edith Malcolm was born at Hamilton in 1891 to Henry Charles Malcolm and Mary Jane Blyth. Henry Malcolm held a public service job as Lands Officer for the Hamilton district.  In late 1901, Henry received a promotion and the family left Hamilton in early 1902. By 1916, Edith was nursing at the Alfred Hospital and passed her Royal Victorian Trained Nurses’ Association half-yearly exams.  Her brother Norman enlisted in May that year and in September 1916, her older sister Stella left Australia with the Australian Army Nursing Service.  During May 1917, Edith followed her siblings and enlisted.  She was part of a group of nurses bound for Salonika, Greece and she departed with the first contingent of nurses on 17 June 1917. 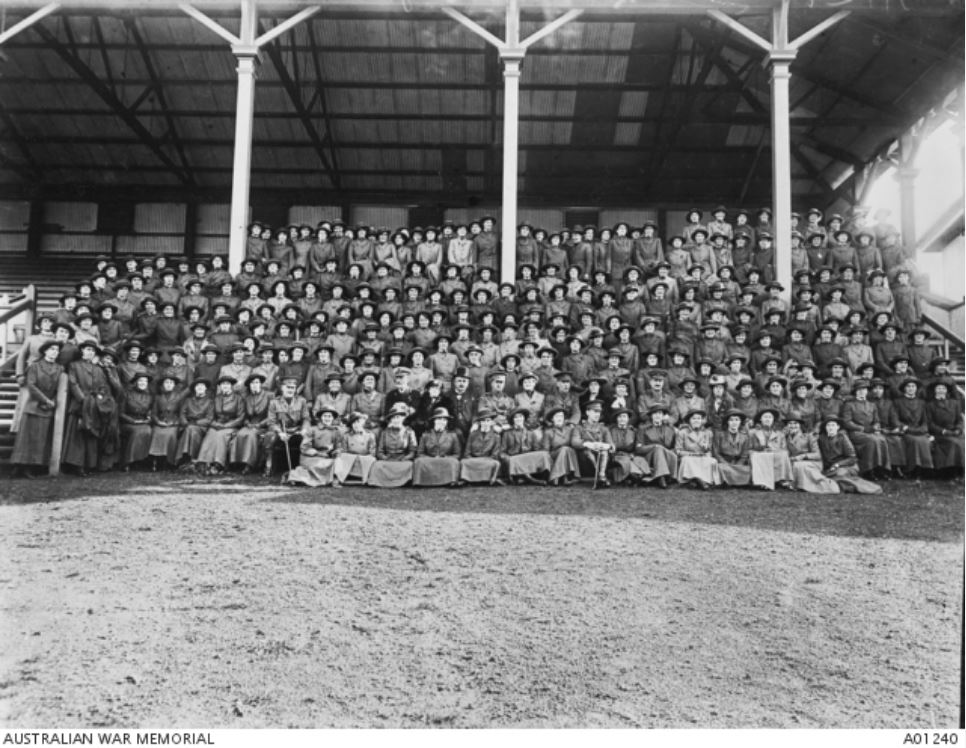 AUSTRALIAN ARMY NURSING SERVICE SISTERS GATHERING FOR A PHOTO BEFORE DEPARTING FOR SALONIKA, GREECE IN 1917. EDITH MALCOLM IS AMONG THEM Image courtesy of the Australian War Memorial https://www.awm.gov.au/collection/C385322

Once at Salonika, the nurses were dispersed to British and Canadian hospitals established there.  There was some disappointment among the nurses who enlisted to nurse Australian men but found themselves instead nursing British soldiers.  Edith went first to the 66th British General Hospital, a tent hospital at Hortiach (below) and later the 42nd British General Hospital, also a tent hospital at Kalamaria.

Before the year was out, Edith’s youngest brother Eric left Australia. For Edith and the other nurses at Salonika, living conditions were poor, some even thought worse than France. There was very little fresh food and they lived off soldiers’ rations. To give their iron levels a boost, a weekly ration of bully beef and biscuits was issued.  Winters were freezing and the summers were hot with malaria was a constant risk. The nurses had to cover themselves from head to toe to protect themselves from mosquitos.  An article in the Ballarat Courier reporting on the death of Sister Munro at Salonika touched on the bad conditions they were living under. 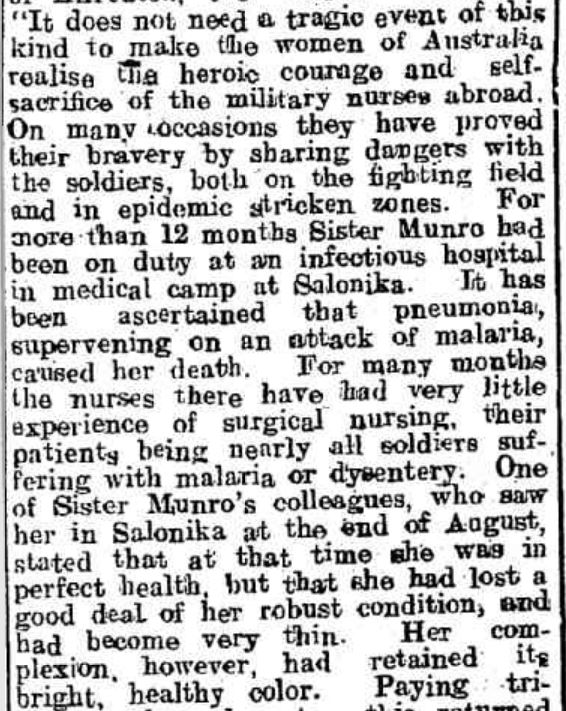 SISTERS OF THE 60th GENERAL HOSPITAL ON WASHING DAY AT SALONIKA, GREECE 1917 Image courtesy of the Australian War Memorial https://www.awm.gov.au/collection/C43216

It was not surprising Edith fell sick on 9 July 1918 and diagnosed with anaemia. The medical board determined Edith be invalided home.  She returned with a number of other nurses who were also suffering poor health.  Once home, Edith found her brother Norman had returned home in the months before.  Her sister Stella returned on 19 May 1919.  Younger brother Eric returned on 4 July 1919. Upon his return, the Malcolm siblings were able to come together for the first time in three years for this beautiful photo.

Following the war, Edith lived with her parents and sister Stella in Bamfield Street, Sandringham where her father Henry died in 1925. On 5 March 1927, Edith married Ralph Bodkin Kelley.  Ralph was a vet and served with the Veterinarian Corps during the war.  Edith and Ralph went on to have one son.  Edith’s mother Mary died in 1931.  Ralph moved with his work and he and Edith went to live in Wentworthville, NSW in the mid-1930s and then on to Queensland where they remained and Ralph worked with the CSIRO. In 1954,  Ralph was awarded an Order of the British Empire for his work with cattle and adapting them to the tropics of Queensland.  Ralph died in 1970 and Edith in 1971.

Australian War Memorial – Mettle and Steel: the AANS in Salonika