Claude Douglas was born at Euroa in 1894 to George Henry Douglas and Henrietta Witham.  He was only five when his father passed away in Melbourne.  Henrietta moved her family soon after and resided in Station Street, Hamilton.  Claude attended Hamilton State School and when he completed his schooling he began work as a painter. He was known by all as “Dot”

At the age of 20, Claude enlisted at Hamilton on 10 September with the 14th Battalion.  He left Australia for Egypt on 22 December 1914.  The 14th Battalion were given notice they would be going to the Dardanelles and were part of the landing at Anzac Cove on 25 April 1915.  The Battalion was involved in heavy fighting during May, which saw Albert Jacka of the 14th Battalion awarded the Victoria Cross.

There was not much let up for the 14th over the following months.  When not in the trenches, Claude slept in a tent with twelve other men, but by the time August came around there were only three left, all Hamilton men, Claude, Arthur Lewis and Albert Sheehan.

In early August, the 14th were part of the Attack on Hill 971.  Around that time, on 6 August, Claude was bitten by a snake but stayed with his battalion although he was very lame. An attack on Hill 60 was planned for 21 August.  Captain Richardson of the 14th Battalion advised Claude not to take part because he was still in recovery but Claude insisted and proceeded into battle.  The following morning at roll call, it was found that Claude was missing.  As no prisoners were taken it was assumed he was dead.  Later at the inquiry into his death, other members of the battalion recalled that day include Private Mitchell: 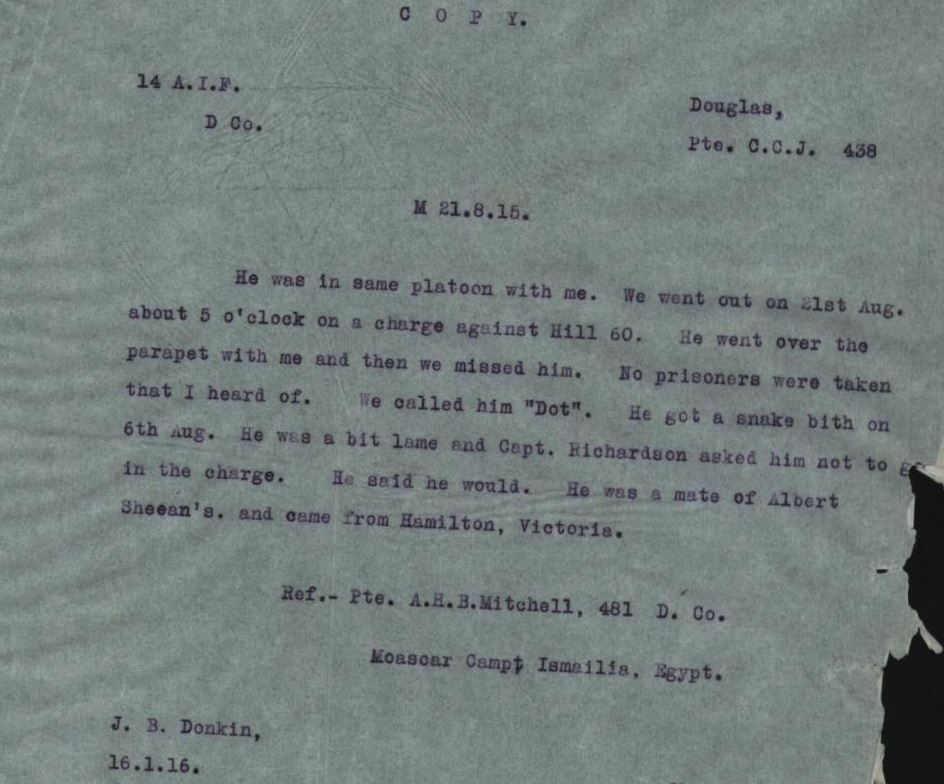 After the Attack on Hill 60, the tent was empty.  Claude was dead and Albert Sheehan was missing.  Arthur Lewis died of wounds only a week earlier.

At home, Henrietta received official word of Claude’s death.  Also, like many widowed mothers, she received the following letter from Base Records on 9 August 1920:

Claude had a tree planted in his honour along Hamilton’s Anzac Avenue and is remembered on the Hamilton State School honour roll and the Hamilton War Memorial.

The Battle for Hill 60