Caroline Allen was born at Branxholme, one of ten children of Edward Allen and Ann Capenhurst.  She became a nurse, training at Hamilton Hospital from 1903. In 1908, she moved to the position of “additional nurse” at the Hamilton Maternity Hospital with payment of £50. Around 1909, Caroline moved to Western Australia and spent about ten months nursing before becoming matron of a private hospital Anatoli in Brookman Street, Kalgoorlie, Western Australia.

On 20 July 1915, Caroline left Australia for Egypt as a staff nurse. On 13 September she reported for duty at the 2nd Stationary Hospital on Lemnos Island.  She remained there until 1 January 1916 when she returned to Alexandria, Egypt.  She then went to the  No. 1 General Hospital at Heliopolis (below)

On 29 January  1916 while at Heliopolis she wrote to her niece Ruby Allen of Bendigo and described her time on Lemnos,

It was very pioneering work there; very few conveniences, sometimes short of water. Nearly all the time we were in tents. Sometimes we had gales of wind and then there were batmen on duty to drive in the pegs of the tents and tighten up the ropes to prevent them being blown over. We had a very bad experience so far as the weather, was concerned, an icy cold wind blew in hurricanes day after day; then the rain came on, followed by sleet; later a slight fall of snow. We now have a slight conception of what a blizzard means.The Island of Lemnos with its inhabitants is like a chapter out of ancient history. I think if we could have visited it two or three hundred years ago we would have found the people living the same kind of lives as today. The women may be often seen with their spinning jenny weaving their cotton. I purchased one as a curio… Lemnos is very hilly. There is quite a range of hills extending for miles; the highest peak was about six miles from our hospital. Shortly before we left we walked to this high peak, which has a Greek shrine on the top.From this “eminence you can see the islands of Imbros and Samothrace quite distinctly, and in the distance we could see Gallipoli the land where so many Australians fought, bled and died. Though it was pioneering work I shall always, look back with pleasure, or rather, satisfaction to having been there. There are also hot mineral springs at a place called Therma. Baths are erected, and whilst the troops were there, great numbers visited this place to have a hot mineral bath…It may be only a tale, but they say Helen of Troy bathed in this water…All round this part the work is full of interest because Biblical historical events occurred in this vicinity.”  (The Bendigo Independent, 7 March 1916)

On 19 March 1916, Caroline returned to Australia while nursing on a hospital ship giving her a chance to have a short leave break in Kalgoorlie. By July 1916, Caroline was in England at the No 1. Australian Auxiliary Hospital at Harefield. She remained there until 1 January 1918 when she left for France arriving on 19 January. She was posted to the 3rd Australian General Hospital (3rd AGH) at Abbeville.  The 1st Australian General Hospital at Rouen was short-staffed so Caroline went to Rouen on 30 March remaining there until 7 July when she returned to Abbeville.
On 1 October, Caroline was promoted to Sister.  Matron Grace Wilson’s report for October 1918 mentioned many nurses were sick with heavy colds and sore throats. They were working long hours with very little time off duty.  There was a heavy turnover of patients and many were very ill, requiring extra nursing. Added to the strain of the workload, Caroline’s father died at Branxholme on 25 October.  Armistice came the following month and there was a chance for some off-duty time. On 4 December 1918, Caroline was admitted to the 3rd AGH with exhaustion. She was one of four sisters admitted to hospital during the month. 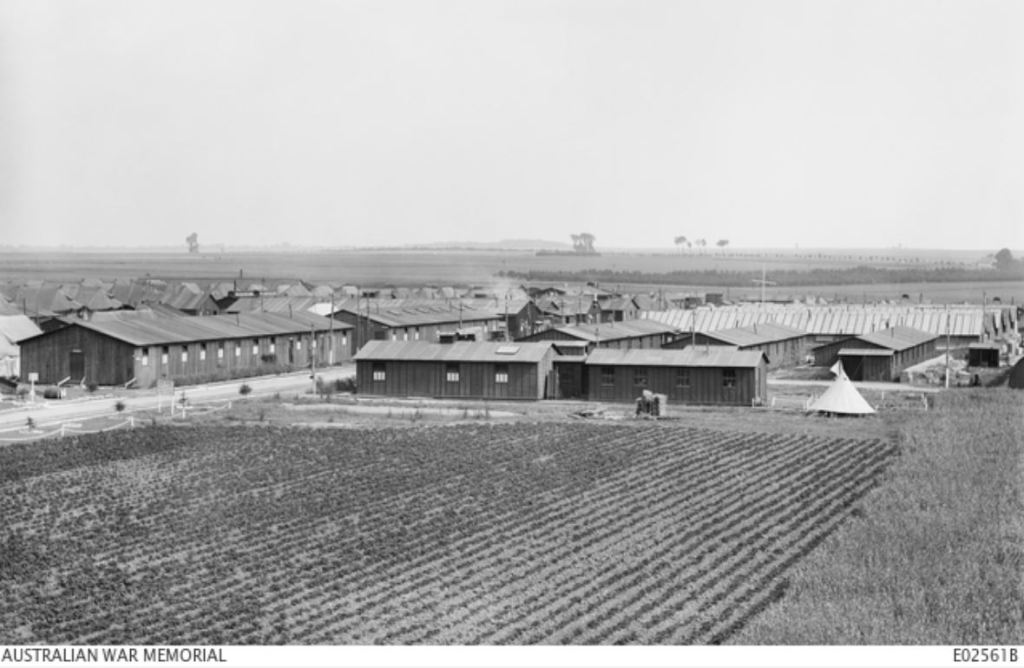 By 1925, Caroline was living at Harvey, Western Australia with her older sister Elizabeth Ann who was also a nurse.  By 1928, Caroline was working as a sister at the Leederville Infant Health Centre in Perth. Caroline moved to 41a Salisbury Street, Leederville with Elizabeth and their younger sister Lilian also moved in.  She was listed in the local business directory as a midwife and she was also a Chiropodist.

In time, younger sister Lilian went to live with Caroline and Elizabeth at 41a Salisbury Avenue.  Caroline died at Leederville Perth in 1957 at the age of eighty-six. She is remembered on the Hamilton Hospital Honour Board.