Stanley Roy Niddrie was born in Hamilton in 1896, the fourth son of skin dealer Robert Niddrie and Mary Jane Carr of Coleraine Road. Robert died in 1914, leaving a widow, six sons and two daughters.  By that time, Stan was working as a drover.

In 1915, Mary Jane Niddrie moved to Canterbury Road, Albert Park but Stan needed her consent when he enlisted in August 1915.  On 20 September 1915, Mary Jane sent a telegram to Stan: “Sell horse dogs do duty. I consent. Mother Albert Park.”  The Hamilton Spectator reported on the presentation of a watch to Stan on 28 July 1915 by the Hamilton branch of the Drovers’ Association, recognising Stan’s enlistment 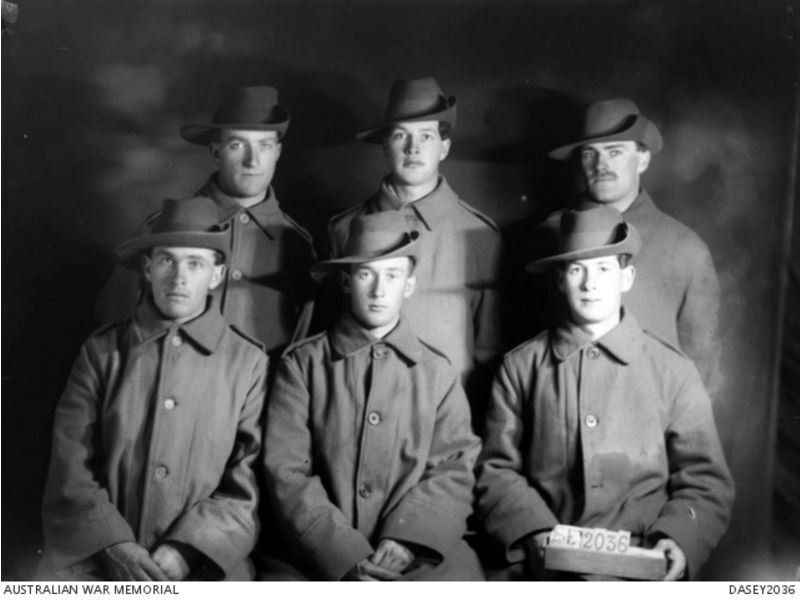 Stan was attached to the 23rd Battalion and sailed on 27 October 1915 for Egypt aboard the HMAT A38 Ulysses aged nineteen and just five feet four inches. On 2 February 1916, Stan penned a letter to his mother telling her of his experiences, including his attendance at funerals of fallen soldiers at the Cairo War Cemetery.  While there, Stan saw the grave of fellow Hamiltonian, Robert Coulter, who died of illness the previous November.

Soon after Stan sent his letter, he transferred to the 58th Battalion and was soon after promoted to Lance Corporal.  The 58th Battalion arrived in France on 23 June 1916 and by 19 July they were facing their first battle on the Western Front, that of Fromelles which saw the loss of a third of the battalion.  Stan’s efforts during that time must have impressed as he was promoted to Corporal on 18 August.  He was slightly wounded in November and the following month promoted to Sergeant.

During the early part of 1917, as the 58th Battalion pushed toward Belgium, Stan suffered trench feet from the wet conditions leading to hospitalisation in England. He spent much of that year in England, for a time acting as a Technical Sergent.  By November 1917, Stan had rejoined the 58th in France.

On 6 August 1918, with the 58th were located near Villers-Bretonneux preparing for an advance on Amiens on 8 August, Stan was killed in action.  There is nothing in his service record or the 58th Battalion’s unit diary to indicate what may have happened.  However Stan, aged twenty-two and having served for three years with only three months until the end of the War, was laid to rest on the battlefields of France. He would never return home to the serenity of following a mob of sheep though the Western District on his horse with his dogs by his side.

Mary Jane Niddrie remarried in 1916 to David Fairbairn and remained living in Melbourne.  She placed a notice in The Argus the year following Stan’s death,

Stanley Roy Niddrie’s name is on the Hamilton War Memorial.