James Gordon was born at Fitzroy in 1885, a son of William Gordon and Jane McKenzie. James barely knew his father as William died in 1888 at Fitzroy. The following year, James’ grandmother Elizabeth Gordon died at Clunes and James inherited £2000 to be held in trust until he was twenty.  In 1899, James’ old sister Euphemia Gordon married Samuel Davey and she moved to Hamilton. When James finished school, he worked as a draper but in 1913, his mother Jane died at Fitzroy.

Sometime after Jane’s death, James moved to Sydney and worked as a hospital wardsman. When WW1 broke, he was living at 25 Clarence Street, Sydney.  On 10 July 1915, James’ older brother Harold enlisted in Melbourne and the following month on 20 September 1915, James also enlisted. He nominated his sister Euphemia Davey of Ballarat Road, Hamilton as his next of kin.  The following year, Euphemia’s husband Samuel Davey also enlisted.

In late 1915, James arrived in Egypt with the 18th Battalion 7th Reinforcements but was soon transferred to the 3rd Battalion.  He left Alexandria, Egypt for France on 22 March 1916 and was later transferred to the 1st Australian Machine Gun Company. The company moved to northern France in April. On 26 May 1916, James was hospitalised with illness, rejoining the battalion on 31 May.

James’ company was on the frontline on 19 July at the Battle of Fromelles. On 20 July there was heavy shelling and five men were wounded.  The following day, the company attacked Pozieres.  There was heavy enemy shelling and by the end of the day, the casualties were five wounded and one killed.  It was a hectic time for the AIF and at times it was difficult to keep track of those wounded and missing. Sometime over the days of 20 July and 21 July, James Gordon was wounded when a shell hit his trench.  He was taken to the 45th Casualty Clearance Station at Daours with wounds to his chest. He died on 22 July 1916.  The Roll of Honour has his date of death as 21 July, however eyewitness accounts give the date he was hit as 20 July with his death on 22 July.  He was buried at the Daours Communal Cemetery Extension.  Even the cemetery records show a discrepancy with one record showing James’ death as 21 July and another 22 July.

On 1 August 1916, Euphemia received word of James’ death. It was something she must have dreaded each day with a husband, three brothers, four nephews and a brother-in-law serving. 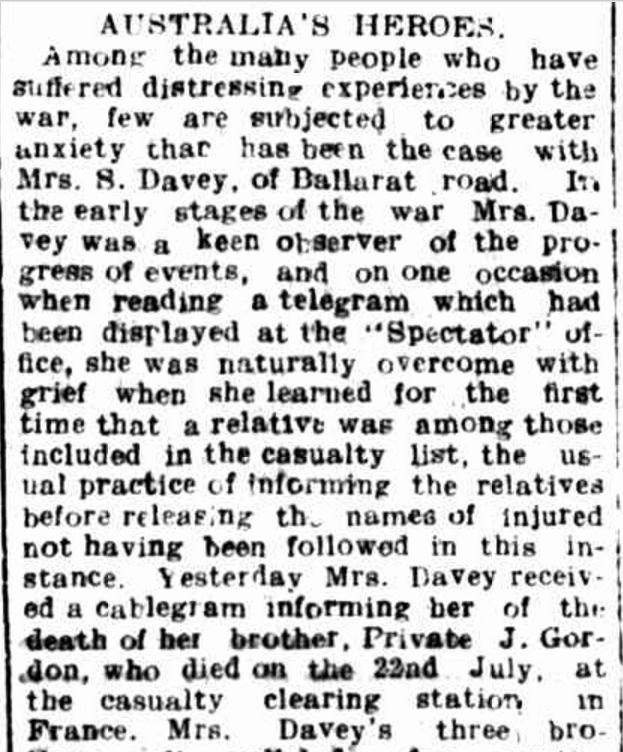 James was remembered in Hamilton with a tree planted along Anzac Avenue.