The Cape Nelson Lighthouse was fully operational in 1884, but calls for its construction came long before.  One of the earliest references I have found to mention a lighthouse at Cape Nelson was in The Argus of 7 January 1864.

On 8 August 1876, the Portland Guardian expressed frustration at the Government not following through on a promise to build the lighthouse.

Coastline below the lighthouse

In 1879, the Portland Guardian considered the continual delaying of the lighthouse construction as criminal.

Finally, in 1882, tenders were called for.  The Portland Guardian made the announcement on 30 March 1882 and the article in full explained the plans for the proposed lighthouse in detail. 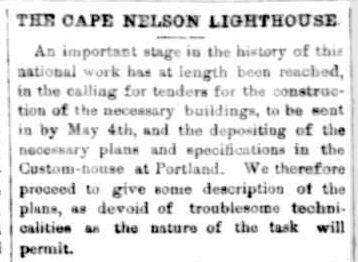 Work began later in 1882 but was impeded by strong winds and the lack of skilled workers.  The Portland Guardian offered some great articles at this time outlining the progress of construction.  An article from 28 December 1882 describes the construction of the wall and the assistant lighthouse keeper’s house. Another on 24 July 1883, describes the job of sourcing the stone for the job and talks of a lift that would be used to aid the construction of the tower.

On Monday 7 July 1884, the Cape Nelson Lighthouse was lit for the first time.  The joint honour was given to the then Mayor of Portland, Mr P.W. Shevill and former mayor Mr W.T. Pile who had played a big part in the project getting off the ground.  A dinner was held that evening at Mac’s Hotel in Portland to celebrate. 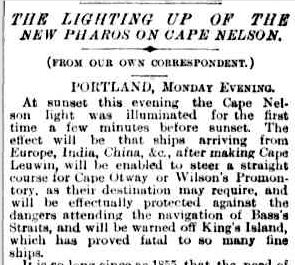 An article from the Portland Guardian of 8 July, thanked the contractors Messrs. Horne and Slingo, and looked at the history of the lighthouse from the time it was first determined a lighthouse was required, to the first lighting of the lamp on 7 July 1884.

The first Lighthouse keeper at Cape Nelson was William Fish.  His assistant was Henry Murray and the junior assistant, Thomas MacBain. 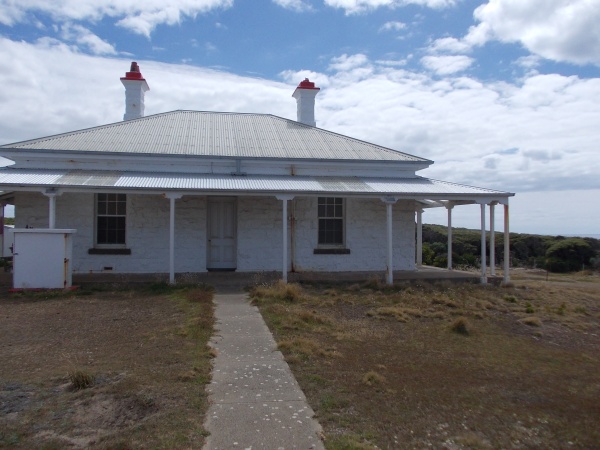 Today, on the road to Cape Nelson and while at the lighthouse, it is difficult to avoid the presence of wind turbines.  In a strange way, they look almost graceful on the landscape, but I am not too sure what William Fish would have made of them.

The Old and the New

There were other articles from the Portland Guardian about the Cape Nelson Lighthouse also worth reading:

Portland Guardian – 7 October 1882 – A WALK FROM PORTLAND TO THE CAPE NELSON LIGHTHOUSE SITE –  This article written by the “Traveller” describes a walk from Portland to Cape Nelson to inspect the site of the proposed lighthouse, a round trip of about 24 kilometres.

Portland Guardian – 19 August 1920 – BEACON OF THE NIGHT – “Openlight” describes a visit to the Lighthouse, including a climb to the top.  There are also references to former lighthouse keepers at Cape Nelson, including William Fish.

Portland Guardian – 3 October 1927 – CAPE NELSON LIGHTHOUSE – This article tells of the role of parliamentarian Peter Lalor, of Eureka Stockade fame, in the eventual approval of a lighthouse at Cape Nelson.

Portland Guardian – 26 March 1931 – CAPE NELSON AND ITS LIGHTHOUSE – The correspondent “W.H.M” tells of a visit to the Cape Nelson Lighthouse.  I found this article particularly interesting as it reports on the children of the lighthouse.  He talks of Frank Piper, a boy of around nine, with sight in only one eye, who was educated by correspondence.  A reference was made to an article in The Argus, earlier in 1931, by a Mr Tate.  I managed to track down the article and found it was written by a Frank Tate and appeared in The Argus on 28 February 1931, under the title – OUTBACK PUPILS – A MODERN DEVELOPMENT IN EDUCATION.  This too was an interesting article discussing early distance education from the time it was introduced in Victoria in 1914 and after in other states.  He states over 13000 students were receiving their school via correspondence in 1931, with many having not seen the inside of a classroom.  Both articles touch on the loneliness of children living in remote places.  Frank Piper did not see another child until he was six years old and became very emotional when he did, according to his mother.

Portland Guardian – 15 June 1939 – CAPE NELSON LIGHTHOUSE – This article recounts the laying of the lighthouse foundation stone at Cape Nelson in 1883 and a time capsule buried within.

Portland Guardian – 12 July 1951 – NATURE NOTES – B.E. Carthew reports on a scrapbook kept by Frank Row, which documents the life of former Portland mayor William Pile, one of the inaugural lamp lighters at the Cape Nelson Lighthouse.  A clipping from the scrapbook was from the opening of the lighthouse in 1884 and it gives further insight into the day.  There is also a list of lighthouse keepers from 1917 through to 1951.