Recently the National Library of Australia  released digital copies of The Portland Guardian onto their Trove website.  This is very exciting for those researching family links in the Western District and along with the Camperdown Chronicle, Trove users have an opportunity to find out more about their families.

I thought it right that today’s In the News should feature articles that appeared in The Portland Guardian on May 9, 1910.

On Page 2, the lead story is an Obituary for long time Heywood resident Malcolm Cameron.  I have some interest in Malcolm Cameron as he is the father in law of my first cousin four times removed, Emily Harman.

Malcolm was born in Perthshire, Scotland in around 1823.  There is a record for a Malcolm Douglas arriving on the “Glen Roy” in 1854.  Malcolm married fellow Scot Elizabeth Douglas in Victoria in 1860 and they had their first child, Fanny in 1861 at Heywood.  They had a further nine children over the subsequent 21 years.

From the obituary it can be seen that Malcolm Cameron was active in the community as a JP and Councillor .  It mentions Malcolm was lost in the bush a few months earlier.  An article about this appeared in The Portland Guardian and other papers including The Argus on December 8, 1909

Malcolm’s son Malcolm Douglas Cameron was born in 1864 at “Cave Hill” near Heywood and married Emily Harman in 1900.  They had two sons, Oliver and Alan.

DEATH OF THE KING

An article on Page 2 gives a hint on some major international news of the time.  The Portland Post office would be closed the afternoon of May 9 out of recognition of a day

of mourning which had been announced throughout the Commonwealth on the passing of King Edward VII on May 7, 1910.  On Page 3, the headlines proclaim,

“Death of the King” with details of the king’s death and further on, the reaction of the Portland residents.

The people of Portland were sent into deep mourning according to this article with flags at half mast and church bells tolling. Miss Allnutt, the organist who is mentioned in the article was a daughter of the minister of St Stephens Church at the time. Arch Deacon Allnutt was Minister for over 30 years.

THE UPS AND DOWNS OF SKATING

Skating appears to be a popular pastime of the late 19th Century and early 20th Century.  Two articles about skating appear on Page 2, one announcing the opening of the Portland Skating rink and the second demonstrating the dangers of the sport. 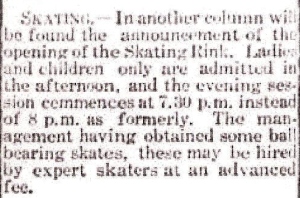 The advertisement on the same page reveals skating was being held at the Free Library Hall and entry was sixpence.  Unless of course one was expert and wished to try the more advanced ball-bearing skates!

The second article relates to a skating accident at Casterton which resulted in a nasty concussion for Mr Allan Rowlands.  If one considers the size of the average country hall, the thought of skaters hurtling around, is rather hair-raising.  No wonder women and children were only allowed to skate in the afternoon, when hopefully it would have been a more refined pastime.