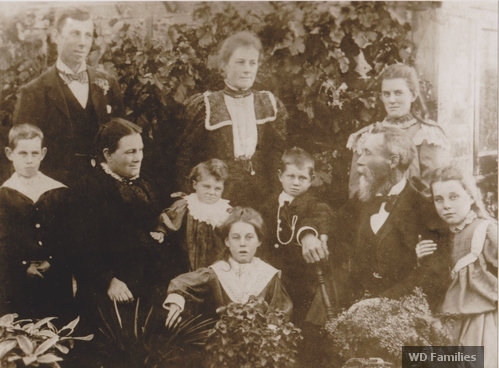 This is Richard and Elizabeth Diwell and their family in the spring of 1900 in Hamilton.  The eldest child, Margaret was nineteen and the youngest, Martha was two. Elizabeth, at forty-four, was in the last months of pregnancy and was radiant.  Martha’s hand rests comfortably on her mother’s growing stomach.  Edith clutches the arm of father Richard, a successful bricklayer and keen gardener, a member of the Hamilton Horticulture Society.  Chrysanthemums were one of his specialities.  Within months, this serene family scene was shattered.

Richard Diwell and Elizabeth Jelly married in June 1877 at Casterton.  Richard, born at Portland in 1854 was the son of William and Margaret Diwell and was their first child born on Australian soil after their arrival in 1853 aboard the Duke of Richmond.  William too was a bricklayer.  Elizabeth was the daughter of  George and Jane Jelly and like William was her parents’ first born in Australia.  They had arrived in 1855 on the Athletae and moved to Casterton where Elizabeth was born in 1856.

Sadness came early in Richard and Elizabeth’s marriage with their first born child, Ada Jane, dying within her first year of life.  Six more children, Margaret, William, Jane, Ralph, Edith and Ernest were born in Casterton over the next eleven years until 1891.  It was in that year that Elizabeth, her mother and sister-in-law, Annabella McIntyre, signed the Victorian Women’s Suffrage Petition along with one hundred other Casterton women.  It was their contribution to the cause championing for equal voting rights for women.

Later in 1891, the Diwells moved to Hamilton.  The following year tragedy would occur again with the passing of five-year-old Ralph.  In 1893, Ethel was born and another pregnancy in 1895 saw the birth of Rebecca but she sadly died in 1896 aged ten months.  George was born in 1896, Martha in 1898.

Which brings us back to 1900.  Despite the losses of the past, life was continuing on for the Diwells.  In March, William was voting in favour of the cancellation of that month’s Hamilton Horticulture Society flower show due to drought and Elizabeth was pregnant for the 12th time at the age of forty-four.

Midway through October Elizabeth fell ill in and was nursed for the next three weeks until she gave birth to a daughter on 2 November.  The baby was weak and died two days later.  Elizabeth was also gravely ill and underwent an operation after the birth of the baby.  She battled to stay but succumbed to peritonitis ten days later, on 12 November.

Elizabeth’s obituary from the Hamilton Spectator on 13 November 1900 read:

“… Another death which has evoked the deepest sympathy of all who knew her took place yesterday when Mrs Diwell, the wife of Mr Richard Diwell, bricklayer of this town, died after a short illness.  The deceased was the second daughter of Mr George Jelly of Casterton where she was born, and she came to Hamilton with her husband in 1891.

She was taken ill three weeks ago and on the 2nd instance she was confined, the child living only two days.  On Sunday evening she had to undergo an operation as the only hope of saving her life but at 3 o’clock yesterday morning she died of exhaustion, the diagnosis being peritonitis.

She leaves a husband and eight children – three boys and five girls – the eldest of who, a daughter is only nineteen years of age – to mourn their irreparable loss. Mrs Diwell who was only 44 years of age was highly respected by all who knew her and the deepest sympathy is felt with the stricken family in their bereavement.  The funeral will take place a 3 o’clock this afternoon”

The headstone in the Hamilton Old Cemetery is a tribute to Elizabeth and demonstrates the devotion Richard and her children had for her.  Her headstone read:

“None knew how sad parting was, nor what the farewell cost, but God and his loved angels have gained what we have lost” 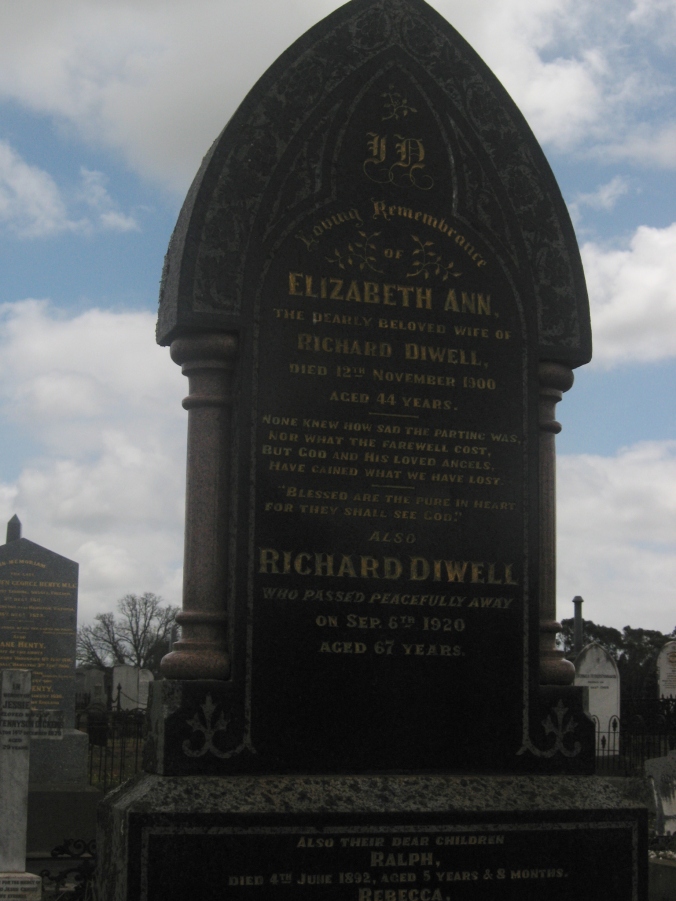 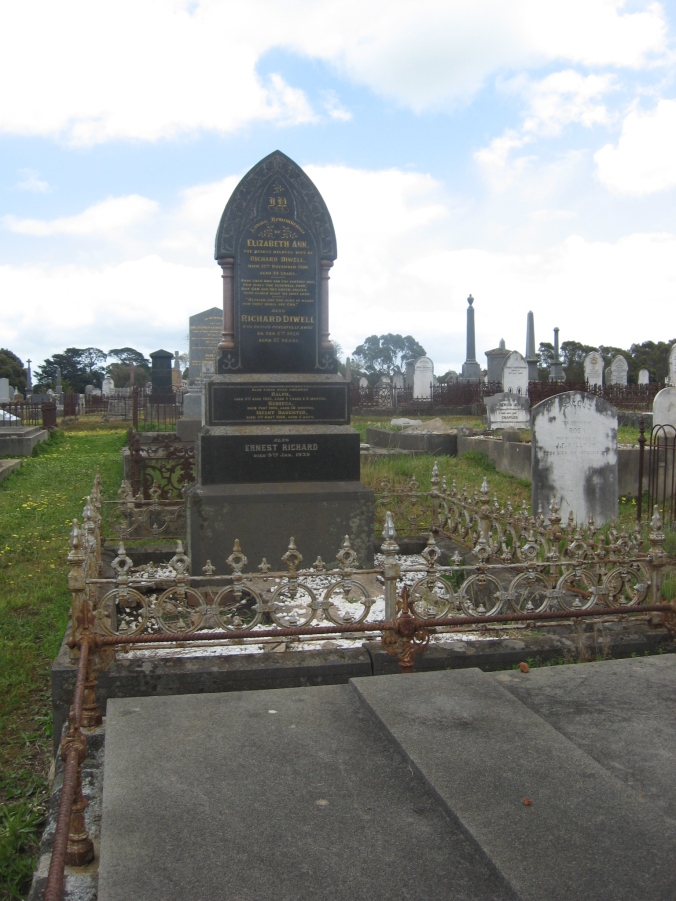 Despite having several young children, Richard never remarried.  The older girls Margaret and Jane would have taken on mothering duties of their younger siblings.  Margaret married in 1905, but Jane did not marry until 1915 at thirty by which time youngest Martha was seventeen.  Richard passed away in 1920 and was reunited with Elizabeth.

Life was not altogether easy for the Diwell children, although they always managed a happy disposition.  Margaret had seven children, however, three died, two as newborns.  Edith, my great-grandmother, suffered through an unhappy marriage and spent much time as a single mother.  Jane married twice, both husbands dying, the second after being hit by a taxi.  She never had children. 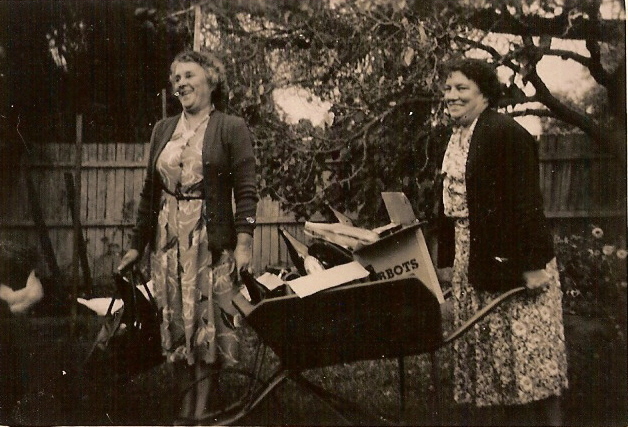 Ethel had four known children, one dying at birth.  Martha or Mat as she was known was forty-one when she married and she also had no children.  The boys, William, Ernest and George all married and became bricklayers like their father and grandfather before them, but Ernest passed away at just forty-eight.

I was not lucky enough to know any members of this family but my mother fondly remembers and often talks of Grandma (Edith), Auntie Janey, Auntie Mat (Martha) and Uncles Bill and George.  The photo above of Grandma and Auntie Mat depicts them just as Mum remembers, always laughing and smiling.

As I look at the Diwell family photo I see Elizabeth as a devoted wife and mother but also a strong woman whose marriage was a partnership of two equals.  I can see the woman who was confident enough to sign the Suffrage petition and I see a happy, kind person, traits she passed to her children.

Next time I visit Richard and Elizabeth’s grave in Hamilton, I will be sure to take some Chrysanthemums.