In 1941, a horse with links to the Western District won the Victoria Derby/Melbourne Cup double.  Named after a small town west of Ballarat and with a female owner from Hamilton, Skipton had the two towns on their feet when he crossed the line to win the 1941 Melbourne Cup.

As a birthday gift in 1939, Mrs Myrtle Kitson was given the choice of a yearling from her husband John. Myrtle selected a colt, sired by Marabou and out of Cupidity.  After some maturing, he was sent to trainer  Jack Fryer. Myrtle wanted to call her colt “Monaco” but had some reservations, so she selected “Skipton” the name of the little town on the Glenelg Highway where she enjoyed stopping on travels to and from Hamilton. (Skipton is often used as a pit stop for those travelling the Glenelg Hwy and a place that members of my family would stop for a cup of tea on their drive back to Hamilton)

Myrtle was superstitious, and on the day of the Derby of 1941, she remained in Hamilton tending the Grand Central Hotel, where she and her husband John were licensees.  John and daughter Morva represented her at the races and when Skipton crossed the line as the winner of the Derby, they accepted the trophy on Myrtle’s behalf.

After the race, reports came through that Skipton had pulled up sore and was an uncertain starter in the Melbourne Cup the following Tuesday.  The night before the Cup, Skipton was declared a starter with William Cooke (Billy) to take the mount.  The late decision, although probably tactics, was the correct one as Skipton took out the race. In doing so, Skipton achieved a feat only twelve horses had done before and no horse has done since, winning the Victoria Derby/Melbourne Cup double in the same year.

Like Derby Day, Myrtle not wanting to jinx the horse remained at the Grand Central Hotel on Cup Day.  Morva and John stopped at Skipton for a cup of tea on the way to Melbourne, just as they did three days before…just in case it was an omen.

The whole of Hamilton must have listened to the race and many crammed into the Grand Central Hotel that day to listen to the Cup on the wireless and a lot of money was bet on the “local” horse.  That and the chance of a beer on the house were reasons enough to take an interest.  The call, by Ken Howard, is online on the following link – 1941 Melbourne Cup Call

As Skipton crossed the line, Myrtle declared “Turn it on for the customers”.

It was not just the money of Hamiltonians riding on Skipton’s back that day.  The Portland Guardian reported there were big wins in Portland on bets placed on the “local” horse.

The win gave Billy Cook his first Melbourne Cup, in his eighth attempt, aged thirty-one.  He won the Cup again in 1945, aboard Rainbird, a horse bred in the Western District at Cavendish.  By the end of his career, Cook had won almost every major race in Australia and had received legend status.  He was inducted into Racing’s Hall of Fame in 2002. 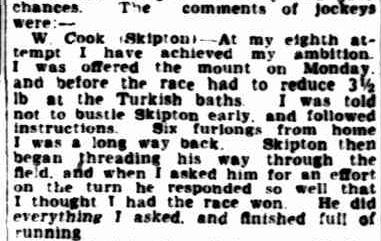 The win was not without controversy.  Punters were angry because in the lead up it was suggested Skipton was unlikely to run.  The price went out and rumours of a £25,000 bet were spreading.  John Kitson denied the rumours insisting he only bet £8000, still a handsome wager in those days.  A Sydney owner was quick to criticise the secrecy surrounding champion racehorses. 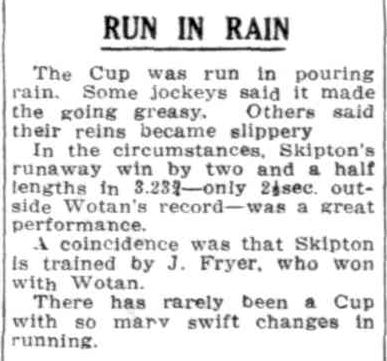 Back in Hamilton, the town was riding on the back of the Kitson’s success.  A “local” horse had won the cup.  To congratulate the Kitsons, a dinner was held, at the Kitsons’ own hotel.

The following year Skipton did not start his preparation well, with a disappointing run in the Mentone Cup.  He followed up with a win in the Stand Handicap, pushing him into Caulfield Cup favouritism. However, he could only manage fifth in the race, with Tranquil Star narrowly winning from Heart’s Desire.  Along with the Caulfield Cup, Tranquil Star won the Caulfield Stakes, WS Cox Plate and the McKinnon Stakes in the same season. 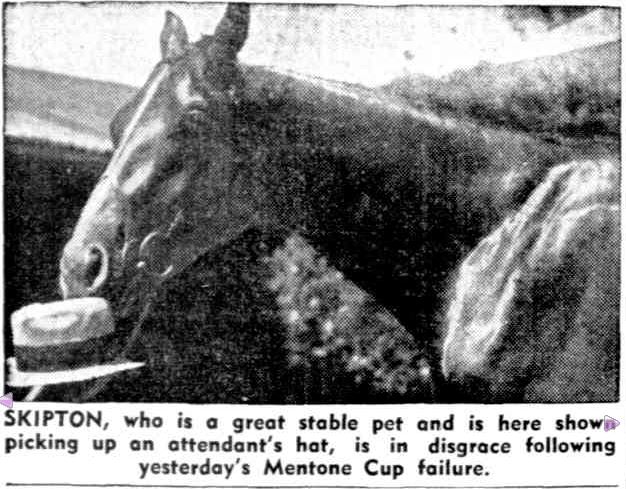 Despite the defeat at Caulfield, come Melbourne Cup time Skipton was pushing for favouritism after John Kitson placed a rather healthy wager on Skipton, thus giving a hint that the horse was on target. 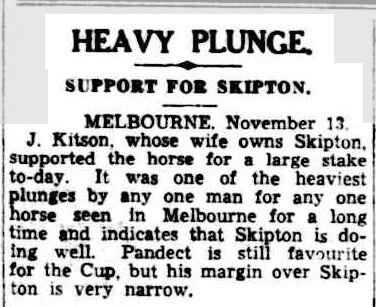 The task was ahead of Skipton.  No horse since Archer in 1861/2  had won consecutive cups and the only horse to have won carrying more than nine stone in the ten years before was the champion, Peter Pan.  Punters were willing to stick with Skipton especially after his excellent lead-up win in the Hotham Handicap carrying 9st 4lb, and as they say, records are made to be broken.

The records remained intact.  In what has become known as the Austerity Melbourne Cup, due to WW2 belt-tightening, a rank outsider called Colonus got up by seven lengths in heavy conditions. Skipton spent the entire race near the tail of the field.  He was then sent out for a spell before his next tilt at the Cup in 1943.

Skipton returned in the Spring of 1943 with the Caulfield Cup his first goal.  That year, because of an overwhelming number of nominations, there were two divisions of the Caulfield Cup.  The first division was won by a roughie Saint Warden and Skipton, showing some of the class of his three old days, won the second division,  Naturally, Melbourne Cup favouritism ensued.

After the win, Myrtle and a generous Hamilton punter donated money to the War Loan effort. 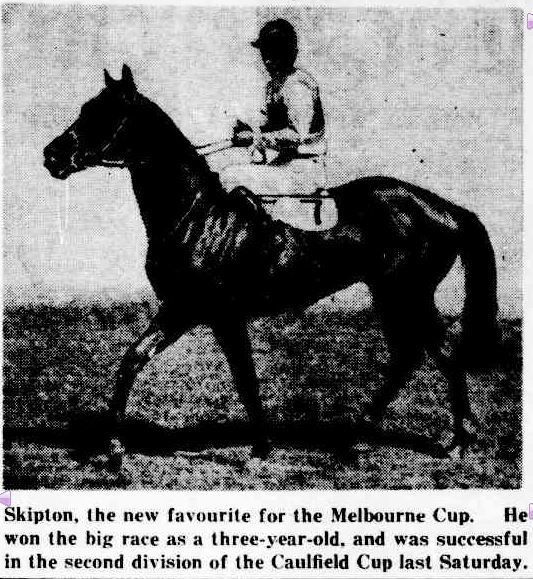 Once again, Skipton went into a Melbourne Cup with a chance to make history, as the first horse to win two Melbourne Cups and a Caulfield Cup.  Also, only three other horses had won the Caulfield and Melbourne Cups in the same year.  Coming around the back of the track before the horses entered the straight for the last time, it looked as though Skipton could win, sweeping around the field from a long way back as he made his run.  However, as they entered the straight, he was forced wide and with a large weight, he could only manage a credible but well-beaten fifth, behind another favourite in the race Dark Felt.  Skipton then ran in the Williamstown Cup later in November and ran second to Claudette.

That was the last race for Skipton.  He was brought into the stable in early 1944 for an Autumn preparation, with the Australian Cup in mind.  Unfortunately, in early February, Skipton developed heat in his near side foreleg and trained at the beach for several days to take advantage of the saltwater.  However, it was soon realised the injury was serious and an announcement was made he would not run in the Australian Cup and later an announcement of his retirement. 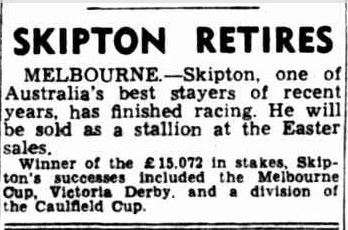 Just over a month later Myrtle Kitson sold Skipton at the Newmarket Sales.  He fetched 1,500 guineas as a stud prospect, the buyer Kooba Stud near Scone, New South Wales.

Late in December 1948, news came through the Skipton was dead aged ten, the result of a tragic stable accident. 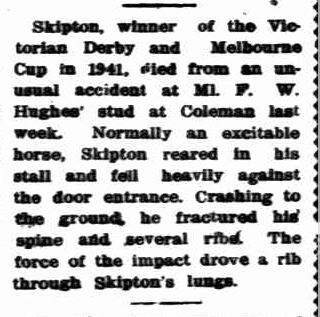