Broken Memories is a series of stories about those buried in Western District cemeteries with broken headstones or monuments. Beginning with Hamilton (Old) Cemetery, the posts will be published regularly over the coming months. For more about the series Broken Memories follow the link – Broken Memories – An Introduction.  If you click on any underlined text throughout the post you’ll find more information about a subject.

The headstone of Sam and Frances Hing is the only one I’ve seen at the Hamilton (Old) Cemetery to date with a Chinese inscription. It also comes with a tragic story.

Frances Mary Ann Lever was born in London in 1856, a daughter of Edwin and Julia Lever. Edwin and Julia and their nine children arrived in Melbourne in March 1866 aboard the Queen of Australia (1) and took up residence in Richmond. Edwin Lever died in February 1871 at Richmond when Frances was around fifteen.

Three years later on 23 November 1874, Frances was eighteen, in Warrnambool and a bride-to-be at the local Christ Church. The groom was thirty-seven-year-old storekeeper Samuel Hing. Samuel Hing who was also known as Sam Hing and Ah Hing arrived in Australia in the late 1850s when in his early twenties.

The wedding created much interest in the town. The bridesmaids were local girls, the groomsmen were commercial travellers and the wedding breakfast was held at the Criterion Hotel. According to the Warrnambool correspondent for the Hamilton Spectator, on the morning following the wedding, Samuel with Frances in her wedding dress, “paraded the streets” of Warrnambool. A son Edwin Francis was born to Sam and Frances in 1876 at Warrnambool (2).

It’s possible the Hings resided in Melbourne after their marriage. A Samuel Hing of Little Bourke Street, Melbourne was among a number of Chinese traders charged with selling sly grog in June 1875.  The charges against Samuel Hing were dropped.  There were also several trips between Melbourne and Warrnambool on the steamer by a Mr and Mrs Sam Hing. One example was in March 1876.

In late 1876, the following notice appeared in the Hamilton Spectator announcing Sam was trading at Coleraine.

However, by early 1877, things weren’t looking good for Sam. He had been trading in Warrnambool as Sam Hing & Co.  The “& co.” was a man called Ah Charn. What happened to Sam’s Coleraine shop is unclear but his Warrnambool shop was in financial trouble. The assets of Sam Hing and Ah Charn were to be sold to repay creditors. 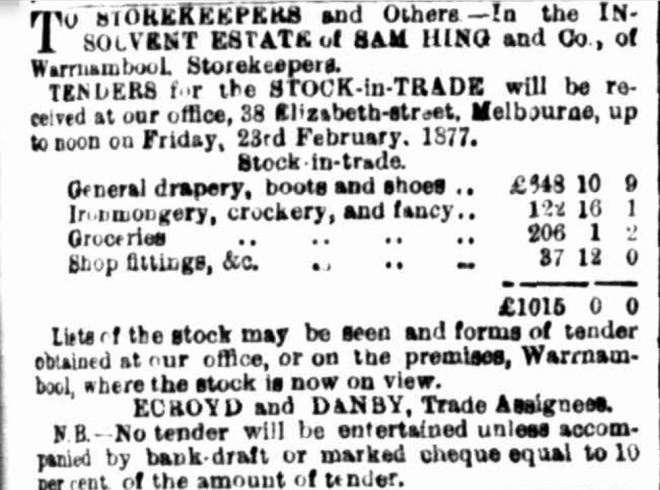 But it didn’t end there.  Sam was charged with concealing assets after it was found he left a parcel of cutlery with Alice Unkles of Oakvale between Port Fairy and Yambuk. 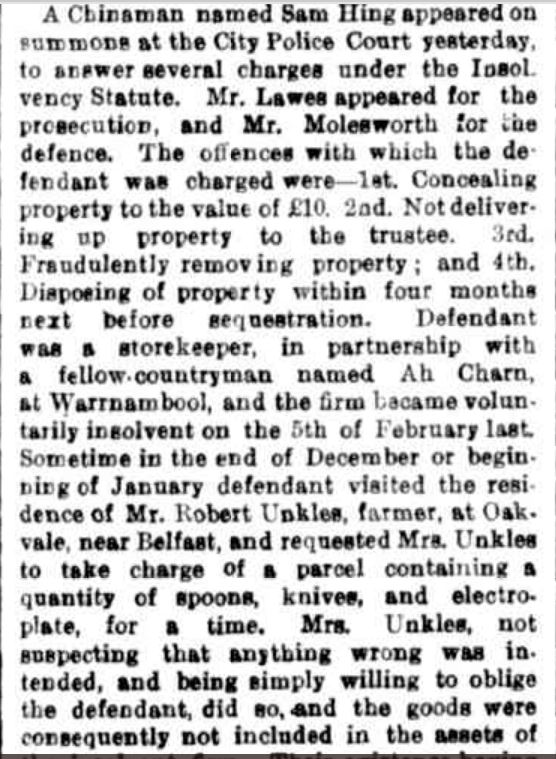 Sam was sentenced to six months imprisonment with hard labour.  You can find Sam’s prison record on the link –  Central Prisoner Register

By April 1878 there was a Samuel Hing trading in Percy Street, Portland. In time, Sam and Frances moved to Burns Street, Hamilton and Sam won first prize for his celery at the Hamilton Agriculture Show in March 1880.  Around the end of October 1881, Samuel was out of town, already absent for about ten days. During that time, Frances took sick and doctors were called. They did all they could, but she died a painful death.

An inquest was held at Hamilton’s Caledonian Hotel on the afternoon of 9 November. It was found Frances’ “Mysterious Death” as it was headlined was due to a substance she had taken with the intention of terminating a pregnancy resulting in a fatal hemorrhage. Samuel strongly denied Frances was pregnant and told of how she had similar abdominal pain once on a trip to Hong Kong. He added the only medicine Frances was known to take was dispensed by Hamilton chemist Carl Klug and she never used Chineses medicines.

Other witnesses said no medicine entered the house other than that prescribed by Doctors Annand and Scott and dispensed by Carl Klug.  Frances’ brother Ernest also gave evidence. Mr Giles the jury foreman suggested maybe a closer examination of the evidence be made, considering the death only took place the evening before, However, the jury was called to give their verdict and after some deliberation announced their decision.

Sam was so upset about the verdict, he wrote to the Hamilton Spectator. 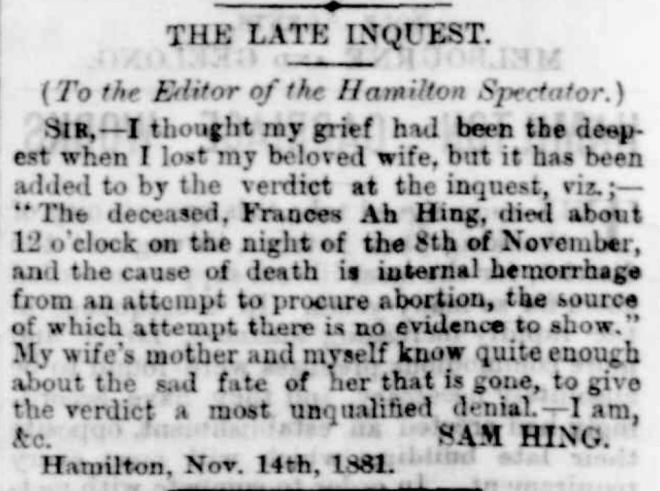 Frances was buried at the Hamilton Cemetery the day after the inquest. 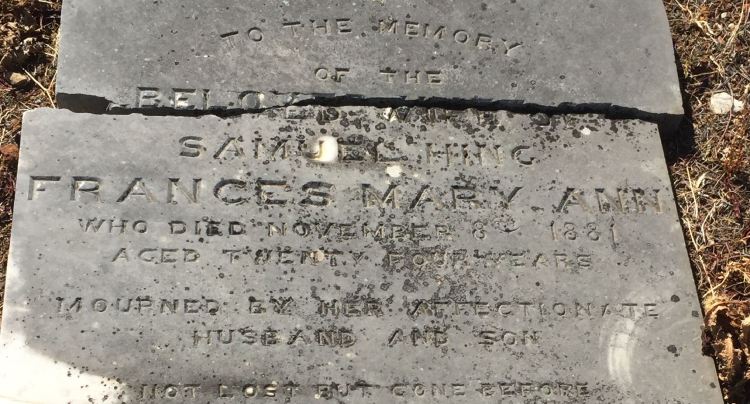 By April 1887, Sam was managing a drapery shop in Thompson Street, Hamilton. Judging by advertising in the Hamilton Spectator at the time, the Chinese traders of the town were involved in takeovers and changes of management. Among them was Erng Long.

On Easter Monday 1887 (11 April) around 6.30pm, Robert Gallagher entered Sam’s shop. A previous customer, on this occasion Gallagher tried on clothes. He then attempted to leave without paying, rushing from the shop. Sam tried to stop him but Gallagher pushed him aside leaving Sam bloodied. Gallagher was charged with unlawful assault and theft but given a very light sentence a matter commented on in the Hamilton Spectator.  It was reported Sam was still feeling the effects of the altercation the following day.

Two months later on 18 June 1887, Sam was dead.  When I first looked up Sam’s death in the Victorian Death Index, I found his place of death was Ararat, a place he had no known connection (3). When I’ve seen that scenario in the past, more times than not it has played out the location of death was the Ararat Asylum. Sadly, that was the case for Sam.

From Sam’s case file from the asylum (4), on 30 May, about a month after the incident with Gallagher, Sam was taken to the Ararat Asylum by Erng Long who nominated himself as Sam’s nearest relative being his brother.  With them was another man described as a cousin. Sam was suffering from acute mania and at the time of his admission, he was “at times very excited waving his arms about. Subject to fits of immoderate crying. At times laughs heartily”. He was also considered dangerous.

Sam wasn’t eating well on admission but two weeks later on 16 June, an update in his file showed his eating had improved and he was getting up and dressed each day.  He died two days after that update. It appears an inquest was not held into nor did the Hamilton Spectator report on his death.

Sam’s body was returned to Hamilton and buried at the cemetery with Frances on 20 June.  Canton now known as Guangdong was inscribed on the headstone as his birthplace, however, his prison record gave his birthplace as further south at Macau.

The Hamilton cemetery records show another burial in the grave of Frances and Samuel Hing, an unnamed baby buried on 24 December 1886, five years after the death of Frances and months before Samuel’s death.  The Victorian Birth Index shows the birth of a son to Samuel Hing at Hamilton in 1886. (5). The mother of the child is listed as Terne Ah Hing. The Victorian Death Index shows the boy lived for a day (6). Again, the mother’s name is Terne Ah Hing.  In 1887, another son of Samuel Hing was born at Hamilton (7). The mother’s name listed on the Victorian Birth Index is Journ Ah Hing.

The closest I can find to Sam having re-married is a listing in the Victorian Marriage Index of the marriage of Ah Hing to Margaret Gavin in 1886 (8). Interestingly, a Margaret Ah Hing was admitted to the Ararat Asylum in 1898 (8). She died there in 1924 aged sixty-five. Her parents were unknown. (9)

At the time of Sam’s death, Edwin Hing, son of Sam and Francis, was twelve. Sadly, Edwin died six years after his father in 1893, drowning after a fall from a boat off Macau.

The Hamilton Spectator reported on a letter received by Frederick Edward Mitchell of Portland notifying him of Edwin’s death. Edwin, who was educated at the Hamilton State School, appears to have gone to China not too long after his father’s death. Around the age of seventeen, he was employed by the Chinese Imperial Maritime Customs Service as an interpreter and was working at the time of his death. Edwin had given Frederick’s name as someone to contact in case of an emergency.

Frederick was two years older than Edwin and was born in Hamilton and likely attended the Hamilton State School like Edwin.  His father James Mitchell was a bootmaker with a shop in Thompson Street, the same location as Sam Hing’s last shop.  Seemingly a friendship formed between Frederick and Edwin sometime during their time in Hamilton and continued beyond.  Frederick went on to become a postmaster at different locations across Victoria and died at Queenscliff in 1940.