Welcome to November Passing of the Pioneers with a Stawell, Port Fairy and Irish flavour. The pioneers include a licensee, a chemist and an inventive engineer.

A word of warning, while obituaries often have a wealth of information, that information must be treated with caution.  Naturally, obituaries are written using second-hand information and recall events that occurred many years before the subject’s death, therefore that information can often be incorrect and sometimes even fanciful.   Therefore, information found in an obituary can only used for a guide to find primary sources to qualify the claims of an obituary.

Alexander RUSSELL: Died 27 November 1867 at Port Fairy. When Alexander Russell first arrived in Port Fairy in 1847, he took up his chosen profession as a doctor. However, upon his return to the “old country” he gave away medicine and moved into the field of “mercantile speculation” and upon his return to Port Fairy established the Moyne Mill using machinery he brought back from Scotland. Alexander was also the first Mayor of Belfast (Port Fairy) and was elected to the State parliament as member for Villiers and Heytesbury. He relinquished his seat due to ill-health.

Mary D. KEATING: Died 8 November 1914 at Port Fairy. Mary Keating was born in Port Fairy and before her marriage to William Wall, she worked as a teacher at the local Catholic school. William was the Secretary of the Belfast Shire. During her life, Mary was a tireless worker for the Catholic church. William predeceased Mary by fifteen years and they had four children.

Michael QUINLAN: Died November 1914 at Hawkesdale. Michael Quinlan was born in Tipperary, Ireland around 1835, and travelled to Australia when he was around twenty-four. He settled first around Koroit, before taking up land at Hawkesdale. He was a Minhamite Shire Councillor and enjoyed visiting the winter race meeting at Warrnambool.  Michael left one daughter at the time of his passing.

George KAY:  Died 11 November 1915 at Stawell. George Kay lived his forty-nine years in Stawell, in that relatively short time left his mark. He began work at the Stawell foundry and worked in engineering. He took up a partnership in the Kay & Co. Stawell Foundry and remained there until his death. One of his engineering feats was inventing a judging machine for the Stawell Athletics Club, famous for the Stawell Gift. The machine earned him much praise, including from the Governor of Victoria on a trip to Stawell. He was a member of the Stawell Rifle Club and a member of the Pride of Wimmera Lodge.  He left a widow and two daughters.

William WAREHAM: Died 3 November 1916 at Woolongoon. William Wareham’s obituary states he was born at Box Hill in 1844 , however his Victorian Birth registration shows Moonee Ponds in 1845.  At age nineteen, William went to work at Woolongoon Station, near Mortlake. He married and settled in the area. 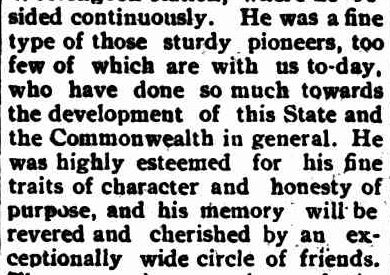 He left a large family including thirty-two grandchildren.

Mary KELLY: Died 19 November 1916 at Stawell. Mary Kelly was born in Tipperary, Ireland around 1836 and travelled to Australia with her parents when she was a girl. She married John Kay and they settled at Great Western.They later moved to Stawell and ran a wine saloon in Main Street before becoming licensees of the Star Hotel (later known as the Stawell Club) in the late 1890s. Family members continued to run the hotel until 1910 when John Alison took over the licence, but Mary continued to own the building.

Margaret ANDERSON: Died 20 November 1916 at Port Fairy. Margaret Anderson was born in Melbourne in 1844 and moved to the Western District with her family at the age of three, taking up residence at Rosebrook. She married John Wright and they settled at nearby Yambuk. Four years prior to her death, Margaret moved into Port Fairy. She was a devout member of St Patrick’s Catholic Church at Port Fairy. Three sons and one daughter were alive at the time of her death, with son George a parish priest in New Zealand.

William DAWSON: Died 30 November 1916 at Stawell. William Dawson was born in Stawell around 1868 and followed his father into the chemist business. After his father’s death, William took over the family chemist shop. William’s passion was sport and he was involved in most of what was on offer in Stawell.  He rode high-wheeled bicycles when they were in vogue and was an official at the Stawell Cycling Club. William was also a cricketer and played with state side, the Victorian Rangers. He was also a founding member of the Stawell Rifle Club and Golf Club and was a keen fisherman. Sport aside, William was a prominent member of the Stawell Brass Band.

Bridget MAHONEY: Died 15 November 1918 at Port Fairy. Bridget Mahoney was born in Ireland in 1823. She arrived in Australia with her husband John Clancy in 1855, travelling from America. Bridget and John settled on a farm at Yambuk.  John passed away around 1895 and Bridget continued to live at Yambuk until seven years prior to her death when she moved to Port Fairy to live with her daughter Lizzie.

William REES: Died 29 November 1918 at Stawell. William Rees was born in South Wales around 1830. He began an apprenticeship as a joiner and for the next five years he travelled to Canada and the United States, arriving in California in 1853. In 1854, he was lured to the goldfields of Victoria, including Ballarat, Carisbrook and Ararat. He married another native of South Wales in Jane Symons in 1855. William and Jane arrived at Stawell in 1857. William  worked as a carpenter for the Oriental and North Cross Mining Company for many years.

3 thoughts on “Passing of the Pioneers”