Winter in the Western District is cold and wet and the southerly winds are freezing.  Frosts are common and snow can fall in some parts, especially around the gold towns of Ararat and Ballarat where sub-zero temperatures are frequent.  Winter weather would have reminded the pioneers of home as they donned coats and hats and furs.  Way too many furs. There was something else we don’t face today in the same way.  Mud. 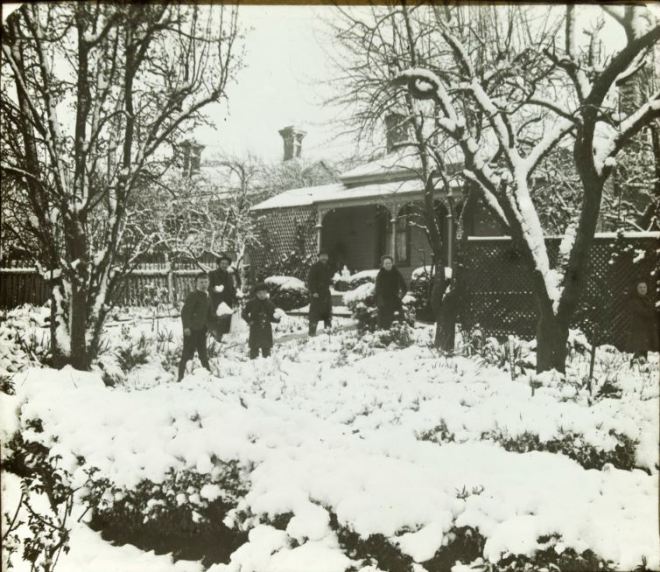 Mud was everywhere in Bendigo in 1856.

The situation was no different in Portland.

Winter fashions across the 100 or so years from the 1840s went from heavy velvet dresses to woollen slacks in the 1950s.  Furs of all varieties were popular especially during the 19th century and early 20th century.  Thankfully the wearing of fur is now frowned upon because at the rate it was being worn, all fur-bearing animals would now be extinct.

Early Port Phillip settlers of 1845 had word from London that velvet was the must-have fabric for the coming season.  Tunic dresses and double skirts were fashionable. 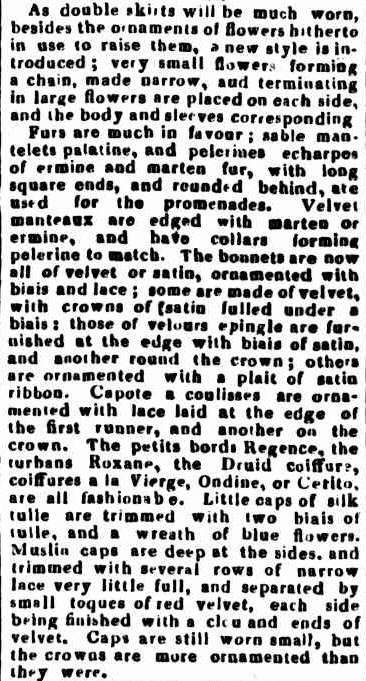 Velvet was still in fashion by the end of the 1840s but not at all practical if walking the muddy streets.

There was a move away from black and other dark colours in 1851, with materials in sky blue and taffeta in apricot.

“Brights” of Geelong received their first shipment of Winter goods for 1851 in May.  A case of goods including cuffs, collars and sleeves and a range of fur accessories were on offer including sable, mink and squirrel goods.

“Brown Brothers” of Geelong offered ladies and children’s boas and cuffs in mink and chinchilla.

Dresses were trimmed with bows, lace, netting and velvet ornaments in the 1860s along with buttons and epaulettes.  Broad borders at the bottom of the dress could be ornamented with trimmings.  An advantage of the border was that it was easy to freshen up with new materials or trims if it became tatty or mud-stained. 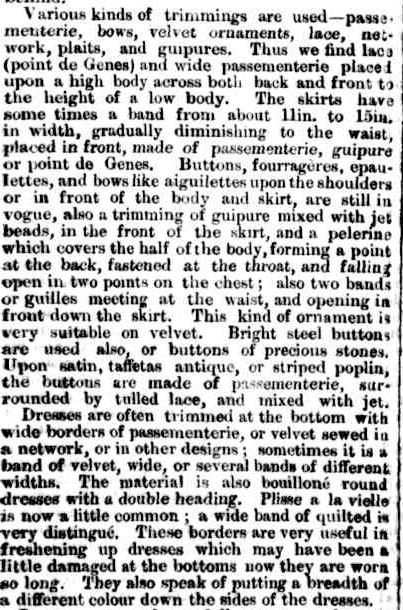 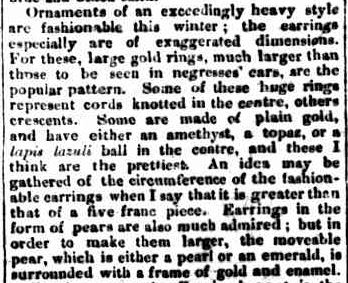 During the same season, felt bonnets were popular.

“A. Paton” of Camperdown offered dresses in a range of materials for winter, 1879.

Patons also sold Dent’s Kid Gloves.  Yes, Dents were going back in the 1870s.  A check of the company website found that Dents gloves were already 100 years old at that time.

In 1882, dresses in silk were made with jacket bodices.  Bonnets were in the “princess shape” and Newmarket coats were often trimmed with fur.

“Heazelwoods” of Percy Street, Portland advertised their new winter stock for 1883.  Hats were available in Beaver, felt and straw.

Sealskin was the most popular fur for winter 1894. Silver fox, red fox and blue fox were also used for wraps.  Black furs of lynx and fox were also popular.

The trimming of winter hats with flowers was thought unusual until 1895. Then there were many colours to choose from instead of the usual black, brown and grey.  There was a doctor’s warning with this article – low-cut dresses must not be worn in winter. 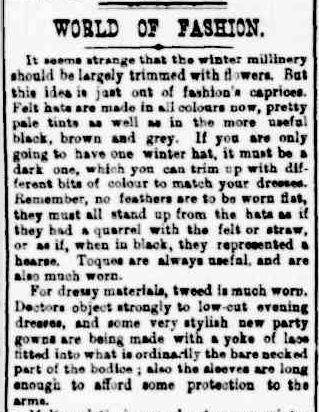 What a display of fur.

Women were told to forget furs of the “cat o’-nine-tail’ variety with “glassy eyes, sharp cardboard noses, and wire claws”.  They were no longer “good form”.  That sounded promising for the animals.  No, it wasn’t.  The furs of 1902 were on a “large scale”

This is an over-blouse an “important” garment from Winter 1908.  It could be made from a Butterick pattern. 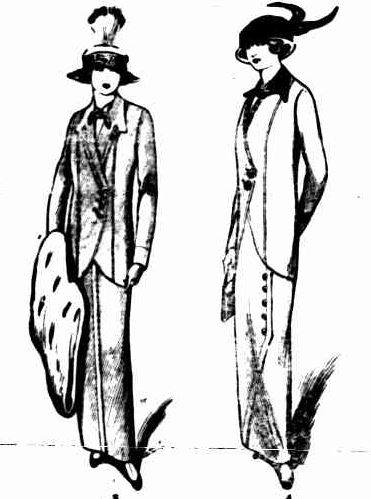 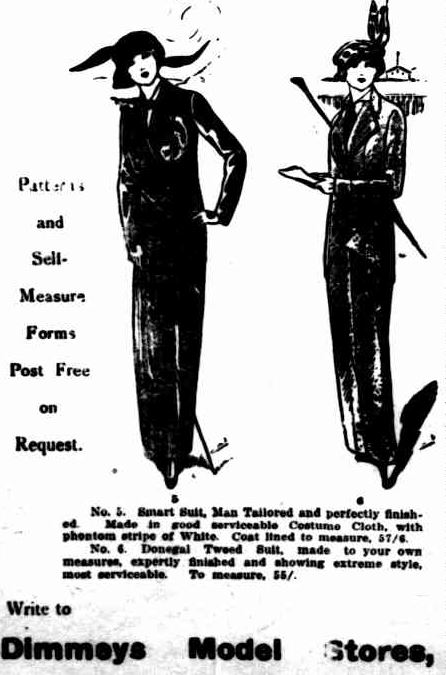 The young lady from around 1914 wears a fox stole and muffler.  How women ever wore fox furs with the heads with glass eyes, I don’t know.  The closest I’ve come to them has been in antique shops, but after reading the children’s book Grandad’s Gifts by Paul Jennings, I hope I never see another.  If you have read the book, you will know what I mean. 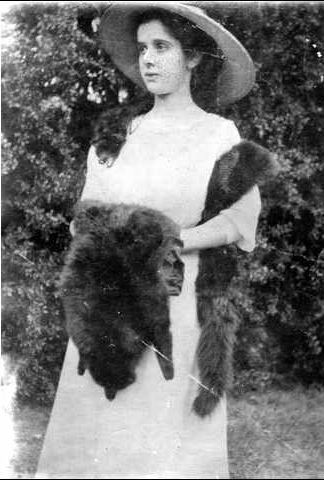 “Langlands” of Horsham were offering more than just “average” garments for winter 1919.

In March 1922. the summer goods were cleared from the windows of fashions houses and exchanged with the latest winter fashions.  A coat of velour with fur trimming was expensive, but the velour made the coat as “warm as a blanket”.  Mole coney was popular.  It sounded exotic but it was only wild rabbit dyed in mole colours. 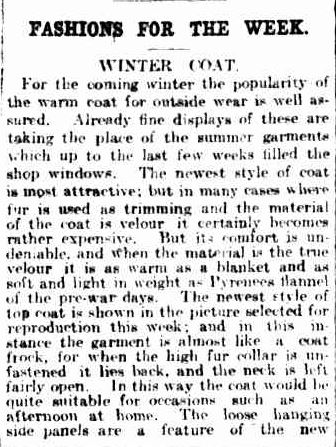 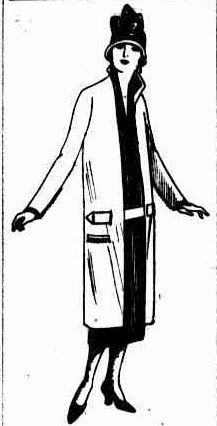 Ostrich feathers were the prediction for winter 1927.  Gone were the days of black or white, all the colours of the rainbow would be available.  Be warned, they only suited the tall and slim.

A range of hats, dresses and coats for winter 1929.

After completing four seasons of fashion, the women of Horsham were the standouts in the fashion stakes.  Maybe it was because of the range of clothing brought to the town by shops such as Madame Griffiths’ of Firebrace Street.

Winter 1935 through the eyes of Petrov. 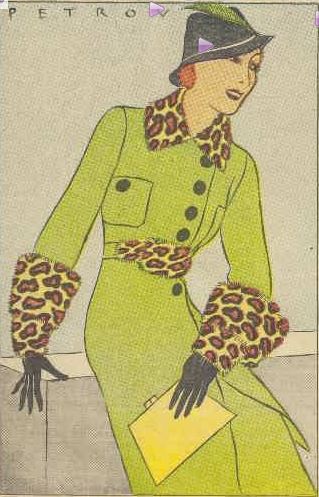 A rather curious type of cape was available for winter 1935.  Made from material akin to that of a “bathing cap”, they were popular because they were light and cheap.  Collars of all sorts were also available, including Peter Pan and those adorned with bows.

Cadet Blue, Kenyan Red and Imperial Gold were just some of the wool colours for winter 1936, available in a variety of yarns. 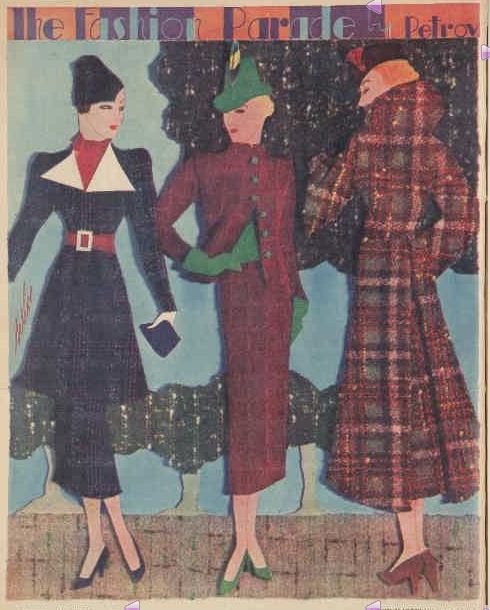 During WW2 money was tight and women were advised how they could have a fresh winter wardrobe on a limited budget.  A coat was most important and clothes from the previous season could be revitalised to save money for a good quality coat.   Cheap materials creased easily and imagine the creases after three hours sitting at the pictures!

Tweeds were fashionable for winter 1944.

Corduroy appeared for winter 1954 in the shape of dresses and tight jeans.   Paisley and leopard print corduroys were available.

After all the furs earlier on, I was a little worried when I read about Poodle cloth coats from Rockmans, Canberra.  They also had a large range of cardigans. 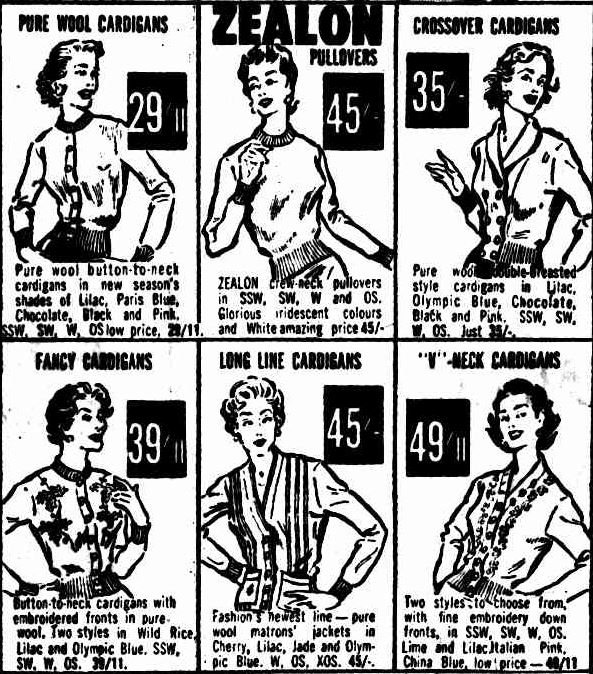 By 1958, a range of wool slacks were available for winter. They were certainly more practical than the dresses female pioneers wore 100 years before.

One thought on “Winter Fashion”