Less than a week on from Boxing Day, a popular day on the calendar for sports and racing, the Western District pioneers were back at it on New Year’s Day.  Most towns had a sports carnival or race meeting or both and the townsfolk flocked to them.

The Turf Inn, just north of Ballarat, had a busy day on New Year’s Day 1858 with sports and pony races held in the vicinity.

At Warrnambool, New Year’s Day 1859 was celebrated with games on Flagstaff Hill, including rounders.  A game of shinty, a Scottish game like hockey, was also enjoyed.

The Caledonian games were a popular New Years Day outing for the people of Ballarat in 1861.  I can relate to the poor shop assistants watching the passing parade of happy people enjoying the public holiday.  I have worked more public holidays than I care to remember, in fact I am working today.  I must say while it is annoying at times, I don’t find myself  thinking as the 1860s employees did “wishing all manner of ills to the exacting master whose behests precluded them from mixing in the throng of light hearts and merry faces that swept past the doors…” 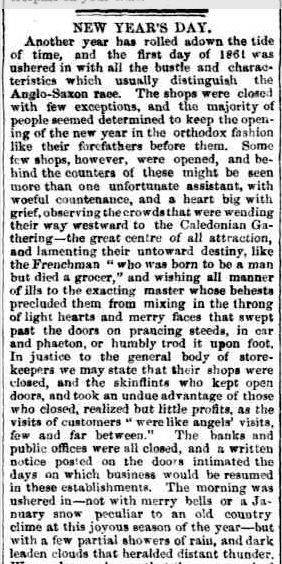 Smythesdale, just out of Ballarat, managed to attract three to four hundred people to their sports day in 1862, despite many other activities threatening to draw people away.  Some of the more interesting sports were catching the pig with the greasy tail and treacle and bread eating competitions.

At Digby in 1863, the local school children held their annual festival and indulged in many cakes and other sweet treats.

I could not imagine a government today, state or federal, holding an election between Christmas and New Year.  On December 30, 1865, a general election was held in Victoria, but the timing was not tactical, but due to the dissolution of the fourth government of Victoria on December 11.  New Year’s Day 1866 was spent enjoying the local cricket match and waiting for election results.

The church bells rang out over Portland at midnight on New Year’s eve 1866, with local boys out on the streets singing “Old John Brown”.  The first day of the new year was hot and outdoor activities were again popular.

In 1869, New Year’s Day saw al fresco dining at Bridgewater and Narrawong.  The correspondent reported he had not seen so many picnics on one day, including one held for the Baptist Sunday school children and a large gathering at Mr Henty’s paddock. 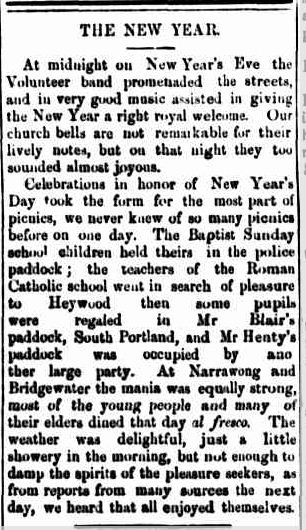 The Australian Sketcher with Pen and Pencil ran a picture of Portarlington on New Years Day, 1879.

Finally an article from Port Fairy, a popular holiday place then and now for people of the Western District and a place I have celebrated New Year’s Eve on several occasions.  In 1927, visitors to the town had swelled, including a party of several hundred Koroit residents on their annual excursion.  Beaches, fishing, cricket, and boat trips to Julia Percy Island kept the holidaymakers entertained.