The stories of the Western District pioneers continue with June Passing of the Pioneers.  Pioneer obituaries come from a woman who was the first European woman at Colac, a man who survived a shipwreck off Tasmania, and a Reverend who started his career as a journalist for the London Times. Look out for the July obituaries when Passing of the Pioneers celebrates a birthday.

Nicholas COLE: Died 22 June 1879 at Darlington. Born in England and heir to an estate in Plymouth, Nicholas Cole decided to try his luck in Australia and arrived in Sydney in 1839. During his voyage, he met another man Peter McArthur and together they sailed on from Sydney to Geelong. They became partners and took up the West Cloven Hills and Menningort runs at Darlington. Those early pioneers faced many hardships including the Black Thursday fires in 1851.  Nicholas, thought to be a descendant of “Old King Cole” the subject of the nursery rhyme of the same name, ran Merino sheep and built up a herd that produced high yields of good quality wool. 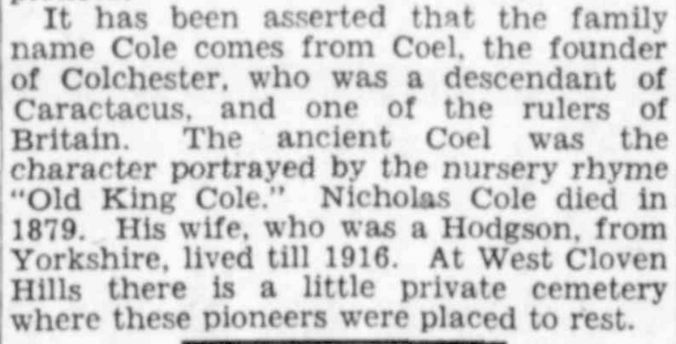 Elizabeth YOUNG: Died 11 June 1892 at Barongarook. Jean Young was born in Scotland in 1823 and as a girl sailed to Tasmania with her parents and her father worked as a solicitor in Hobart. In 1841, she married Hugh Murray. They moved to Geelong and Hugh, considered the founder of Colac, moved to that area, before Jean and her young son joined them, becoming the first European woman in the district.  She raised a family of fourteen children and endured the many hardships faced by early pioneer women in Victoria. Among other things, Jean and Hugh were founding members of the Colac Presbyterian church and Jean remained a pillar of the church during her life. Hugh passed away twenty-three years before Elizabeth in 1869.

George COXON: Died 20 June 1892 at Portland. George Coxon was born and married in England and in 1857 he and his family, including seven children, travelled to Victoria. After a short time on the Victorian goldfields, he took up farming pursuits in the Casterton district.  In his later years, he moved to Portland where he passed away.  A profile of George and his family his available on the SW Pioneers website –    http://www.swvic.org/sandford/coxon_george.htm

Lawrence McKENNA: Died June 1914 at Curlew Hill.  Lawrence McKenna was born around 1830 in Ireland and travelled to Adelaide around 1861. The South Australian explorer John Stuart was about to leave on a government funded expedition to cross the continent and Lawrence joined his party. Stuart eventually abandoned his attempt. After ten years on the goldfields of Victoria and New Zealand, Lawrence gained work at Woodhouse near Dunkeld in 1872. He took a trip back to Ireland in 1874 then returned to Dunkeld to marry Elizabeth Irwin and they settled at nearby Curlew Hill.  In 1900, he was badly burnt while trying to protect his property during bushfires and never fully recovered.

Sophia GERDTZ: Died 5 June 1914 at Hamilton. Sophia Gerdtz was born in Germany around 1831 and arrived in Melbourne during the early 1850s. Her family travelled to Hamilton, where few buildings stood. She first married Robert Thomson at Lyne Station in 1852 but was left a widow during the 1860s. She then married storekeeper Cavendish Neville.  Again widowed, she spent the last years of her life living with her son at Pierrepoint, just out of Hamilton.

Bridget McNAMARA: Died 19 June 1914 at Tower Hill.  Born in Ireland around 1843, Bridget McNamara arrived with her parents to Port Fairy in 1852 and they settled near Farnham and later Dennington. In 1866 at Warrnambool, Bridget married Hugh Reilly, afterward settling at Southern Cross where they lived for the rest of their lives.

Reverend George Duke LEE: Died June 1915 at Hamilton. Born in Derbyshire, England around 1830, George Lee first worked as a reporter for the London Times in America. After briefly returning to England he sailed to Victoria aboard the Blue Jacket in 1853 and made for the Ballarat goldfields. He worked as a teacher but left after medical advice as his eye sight was failing. Instead, he went on a lecture tour for the Sons of Temperance Friendly Society through the Western District. While visiting Chetwynd he became interested in the teachings of the Presbyterian church and entered the Ministry. He was sent to the St. Johns Presbyterian Church at Cavendish where he remained for thirty years.

When George retired around nine years before his death, he moved to Hamilton.

William ALFORD: Died June 1916 at Ellerslie. William Alford was born in England around 1831 and twenty-one years later he travelled to Australia. He was a steward on the ship he sailed aboard which wrecked off the Tasmanian coast. William and other passengers were able to reach shore on a dingy and they walked to Hobart without shoes. William then travelled to the goldfields of Victoria, working as a driver with the gold escort out of Ballarat and later driving the mail coach between Ballarat and Geelong. He moved to Ellerslie in the mid-1860s and he remained there for the remainder of his life. William was a caretaker of the local Mechanics Institute and was involved with the Ellerslie Football Club.

James WORLAND: Died 18 June 1916 at Warrnambool. James Worland was born in Melbourn, Cambridgeshire around 1851 and arrived in Port Fairy two years later with his parents and they settled in the Warrnambool district. When working age, James took a job at a tannery and later purchased his own tannery. William also took up many roles in the community including warden of the Christ Church and a founding member of the local branch of the Society of St. George. At the time of his death, he left a widow and nine children.

William DAVIDSON: – Died June 1917 at Woolsthorp.  Born in Aberdeen, Scotland, William Davidson arrived at Port Fairy in 1855. He first took up labouring at Minjah, a property near Hawkesdale before opening a store at Woolsthorpe. He later  then turned to dairy-farming.  William was known as “The Chaffer” around Woolsthorpe because he enjoyed having a tease.  A widower at the time of his death, William had twelve surviving children.