Finally, I’ve caught up with my Passing of the Pioneer posts. This is the June post and it is actually out in June…just.  I’ve found a new candidate for my feature posts Wonderful Western District Women.  It is Mary McDonald and you can read about her below.  There’s a bit of a waiting list of women to include in the WWDW posts, so when it’s finally Mary’s turn, I’ll write a broader piece about her life. Below you’ll also find the story of a mail coach contractor, a former Port Fairy Mayor and a singing saddler from Camperdown.  Remember to click on the underlined text for further information including the subjects’ names. Those links will take you to the original newspaper obituary.

CAWKER, John – Died 17 June 1876 at Merino. John Cawker was born in Devon around 1845, a son of a carpenter.  He travelled with his parents to Geelong from England in 1854 aboard the Joshua. By the time he was twenty, he had the contract to run the  Cobb & Co. Royal Mail coach between Hamilton and Penola, stopping at Coleraine and Casterton.

John married Hannah Smith in 1868. In 1871, he took over the license of the Commercial Hotel owned and built by George Northcott and completed extensive renovations. 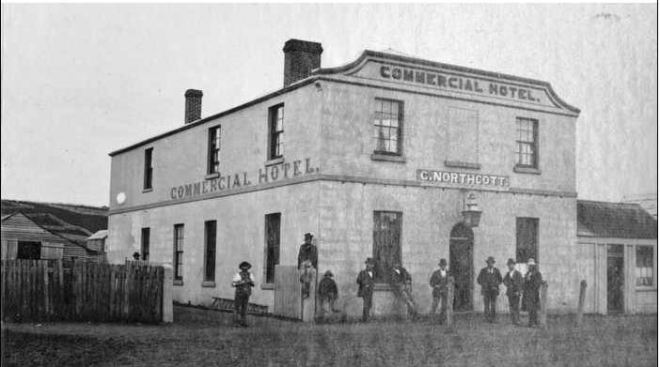 John and Hannah lost their baby John in 1873. John was a member of the Merino and Sandford Pastoral and Agriculture Society and the Oddfellows society and was nominated for the shire council in 1875. The following year, John died suddenly aged just thirty-one, leaving his widow Hannah and a daughter.  Such was the shock of his sudden death, it was a talking point around the district for several days.

John’s funeral left the Commercial Hotel, Merino at 11.00am on Tuesday 20 June for the Casterton Cemetery, followed by a lengthy cortege.  Just before Sandford, the cortege met with Burton and Taylor’s Circus who pulled to the side of the road to let the cortege pass. As they did, the circus band played “Dead March in Saul”. By the time they arrived at Casterton, the cortege had grown significantly. With several hundred people in attendance, it was the largest funeral seen in the district. Hannah took over the running of the Commerical Hotel but died the following year after a buggy accident.  She was just twenty-nine and left one daughter aged three.

RUFFLE, Charles – Died 4 June 1885 at Port Fairy.  Charles Ruffle was born around 1816 and was in Geelong by 1842, working as a baker and confectioner.   Soon after, he arrived in Port Fairy where he worked as an auctioneer.  He also established the Belfast Steam Flour Mill.  Charles was on the Borough Council from 1856 and was a Mayor of Port Fairy in 1866.  He was also a founding member of the Oddfellows society in Port Fairy. In 1882, he returned to Port Fairy after spending some time in Tasmania. He died on 4 June 1885 after a short illness.

McDONALD, Mary – Died 23 June 1906 at Gritjurk. Mary McDonald was born around 1841 and married John Hutcheson in 1861. John was around twenty-two years older than Mary and a widower. She went to live on the Grange Burn just west of Hamilton where John had built the town’s first mill.  John died in 1870 leaving Mary then aged around thirty, four sons and one daughter. Mary continued to run the mill until 1877 when she sold it to Charles Pilven of the Commercial Hotel. In something of a trade, Mary purchased the Commerical Hotel.

The Commercial Hotel is the two storey building with a balcony to the right of the photo below.

VIEW OF HAMILTON INCLUDING THE COMMERCIAL HOTE c1880. Image courtesy of the State Library of South Australia. Image no B 21766/53 https://collections.slsa.sa.gov.au/resource/B+21766/53

In 1884, she leased the Hamilton Co-Operative mill, renamed it the Hamilton Mill and put her son John on as manager. Mary later purchased the Coleraine Flour Mill and spent a large amount of money improving the mill.  In November 1885, the mill burnt down. That didn’t stop Mary.  She set about rebuilding which included purchasing new machinery.

When older, Mary went to live with her son at Gritjurk near Coleraine.  Her health hadn’t been good with bouts of gout and dizzy spells.  She did enjoy walking around the paddocks of her son’s property and the afternoon of 23 June she set off for a walk.  Later in the day, her body was found in the dam by a neighbour.  An inquest found she had drowned but there was no evidence as to how she came to be in the dam. She was sixty-five.  Mary’s body was returned to Hamilton and she was buried at the Hamilton (Old) Cemetery.

GRAVE OF MARY McDONALD AND HER HUSBAND JOHN AND THEIR CHILDREN AT THE HAMILTON (OLD) CEMETERY.

SHILCOCK, John – Died 26 June 1909 at Cavendish. John Shilcock was born around 1824 at Chilwell, Nottinghamshire, England.  As a young man, he spent time in the Yeomanry, similar to the Army Reserve.  In his early twenties, John decided to head for Victoria arriving around 1848.   He spent time at the diggings before arriving in Cavendish around 1853. He opened a boot and shoemaker’s shop and at one stage had six men working for him.

At the time of his death, John left a widow, five sons and two daughters.

KELLY, Mary – Died 25 June 1913 at Ballarat, Mary Kelly was born around 1832 in Belfast, Ireland. She arrived in Port Fairy around 1858 and from there, travelled to the Dunkeld district by bullock wagon  She married William Templeton in 1858 and they remained in Dunkeld district.  The couple went on to have four daughters and two sons. Initially, the family lived in town where William operated a store before moving out on to the land.  William died in 1910 and Mary went to live with her married daughter Irene in Ballarat.  She died there on 25 June 1913. Her body was returned by train to Dunkeld for burial.

DAVIS, Hester Jane – Died 4 June 1914 at Mortlake. Hester Davis was born around 1850 in Bath, England. She arrived in Victoria around 1866. In 1870, she married Thomas Montgomery and they made their home at Killymard at Mortlake. Hester was deeply involved with all facets of the Mortlake Methodist Church. 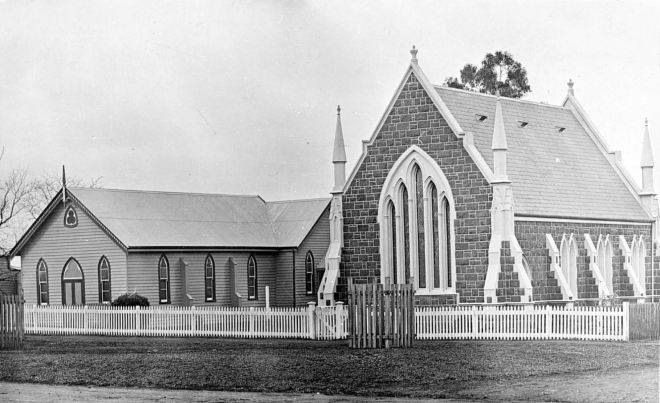 FEWTRELL, Phillip Russell – Died 7 June 1945 at Camperdown. Phillip Fewtrell was born around 1869 at Geelong.  He arrived at Camperdown about 1883 where he was employed by saddler Mr Chant before joining another saddler in the town, Mr McQualter. From there Phillip opened his own saddlery business. Phillip was a good singer, a bass and was a member of the Presbyterian Church choir, He was also a member of the Oddfellows society for forty-nine years and treasurer for twenty-six of those years.  Phillip, who lived in Campbell Street, left a widow and two daughters at the time of his death.