Recently at the Western District Families Facebook page, the page followers and I completed a virtual tour of the Hamilton Highway “stopping” at historic sites along the way. After 185 kilometres and eight weeks, the virtual tour rolled into Hamilton.  I could not have done it without Trove.  Using Trove as my search engine, I was able to locate relevant out of copyright photos held by the State Library of Victoria and the Museums Victoria Collection.  Also newspaper articles from Trove’s digitised newspapers along the way.

The Hamilton Highway was once the main route to the south-west of Victoria from Geelong and Melbourne and some of the earliest buildings, such as the Elephant Hotel at Darlington, date back to the 1840s.  There was such diversity in the history along the highway.  From Cressy, where local schoolmaster Gabriel Knight documented the growth of the township in the 1910s through to the German settlements between Penshurst and Hamilton dating back to the 1850s.  In between, we visited the beautiful homesteads, learnt about 19th century murders and visited former RAAF bases.  There were volcanoes, bank robberies and many faces from the past.

It was at Hexham that I almost stalled and could have quiet easily got sidetracked.  It had everything I enjoy, homesteads, historic gardens, horses and 1920s/30s glamour.  The Hexham Polo Club began in 1884 and polo really took off in the 1890s.  Families such as the Hoods, Manifolds and Urquharts were there in the beginning and some of their descendants are still members.  The polo drew visitors from Melbourne and the districts around Hexham and was a highlight of the social calendar as were the associated parties and dances.  The following photos are from a tournament in 1936. 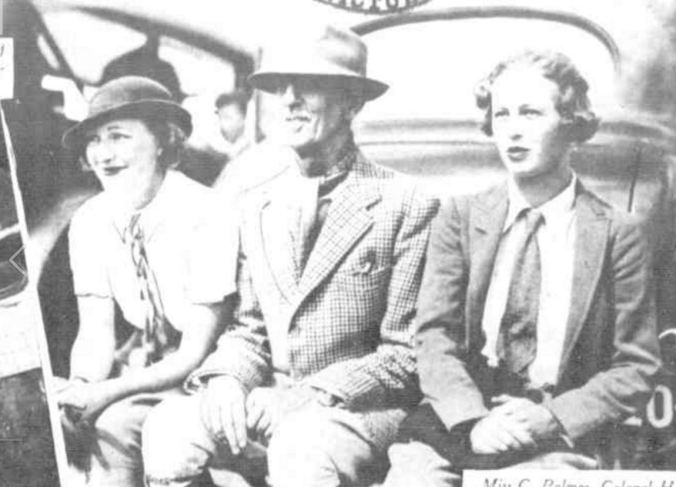 It wasn’t easy to drag myself away from the polo but I had to keep motoring along but I then came across Boortkoi.  The State Library of Victoria holds photos of Boortkoi as part of the J.T Collins Collection.  This is one of just many collections the State Library hold and I am constantly grateful to John Collins and his photography for the National Trust he left to the library.

Boortkoi was owned by the Manifold family and when I did some newspaper searching at Trove, I found this beautiful wedding photo.  On 7 March 1933, Andrew Manifold, son of Edward Manifold of Boortkoi married Jess Robertson of Melton South at Frankston.

Jess Manifold was beautiful and stylish and I wanted to find out more about her and the life she and Andrew had at Boortkoi. Searching for Jess took me to Table Talk one of my favourite publications digitised at Trove.  I found Jess played tennis in a Camperdown tournament in 1935, a popular social event for the Melbourne socialites.  Table Talk reported on 3 January 1935, Jess had two tennis outfits a pink chukka skirt and a white linen skirt.  Also, at a wedding in January 1937, Jess looked stylish in a cinnamon brown chiffon cocktail dress with a straw toque (brimless) hat adorned with the latest trend, opalescent flowers.  And, at a cocktail party at the Menzies Hotel in 1937, she wore dusty pink with a blue hat, scarf and sash.  I also found Jess was at least twice voted one of Melbourne’s best best-dressed, the only country woman named.

In early 1935, the couple moved into the rebuilt homestead at Boortkoi.  During my Trove searches, I discovered Andrew and Jess had commissioned Edna Walling to design a new garden. The following image is Edna’s plan for the garden.

I love Edna Walling.  I’ve read her books, tried to emulate her style in my garden (and failed) and looked through her photos held by the State Library of Victoria, another of the wonderful collections they hold.  With Edna Walling now part of the Boortkoi story, I again started losing my way looking through Edna’s photos again, one of which is among my favourite photos I’ve found at the State Library of Victoria (below).

The touring has now turned to the Henty Highway from Cherrypool to Portland and has just “arrived” at Branxholme.  There is so much history along the twenty-five kilometre stretch from Hamilton to Branxholme, it’s taken ten days to make the trip.  So why not join us.  You’ll find the Western District Families’ Facebook page here.

You can find the State Library of Victoria’s collection of photos on the link here and the Museums Victoria Collections on the link here.  Always check the copyright status of the photos and if there are any particular citing instructions.  The SLV has special instructions on their collections such as the J.T.Collins collection and the Museums Victoria also has guidelines for using their photos under the Creative Commons licence.  While I could look for my photos directly on those sites, I find using Trove is much easier for searching, filtering and working with the results and I can easily tag for future reference and keep my newspaper and photo discoveries together.