From a quick search, I have already found some treasures in the two papers.  For example, an article about the opening of the Byaduk Wesleyan Church at which my ggg grandfather and Methodist local preacher, James Harman was present.  Also an article about an inquest at Cavendish where another two ggg grandfathers Charles Hadden and James Mortimer were jurors. And in another article, a report of the opening of the Presbyterian Church at Casterton, built by yet another ggg grandfather William Diwell and his partner George Northcott.

The most precious pieces of Trove treasure from the two Specs have been the following articles from the Hamilton Spectator about an accident that ultimately claimed the life of William Diwell in 1871.

William was just forty-six when he died in the days after his accident.  His wife, Margaret Turner, died in 1869 aged forty-five.  Their early departures left a family of eight, the youngest just seven.  It was interesting to read of William’s funeral and learn he was a Forester. 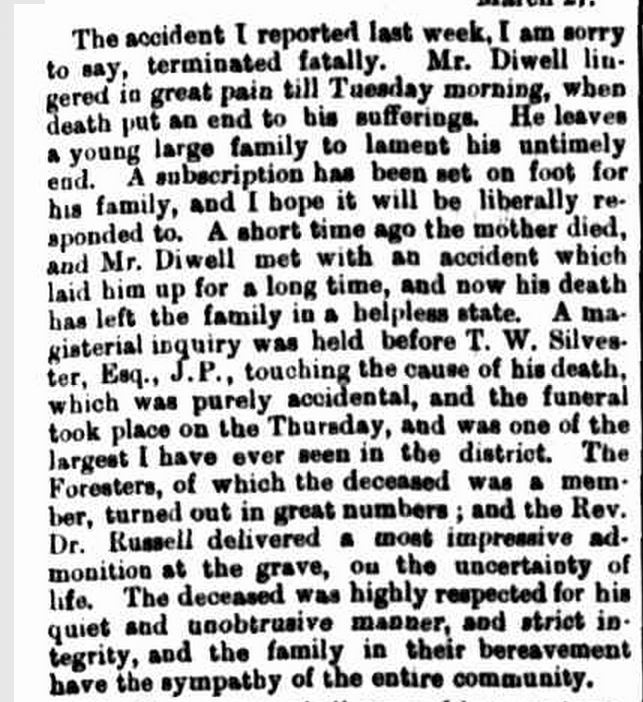 Thank you National Library of Australia, Inside History Magazine, Hamiltonians past and present and history lovers everywhere who saw the value of having the Hamilton Spectator digitised.

To track the Hamilton Spectator’s path to Trove glory, these are the posts I’ve written along the way.

And the winner is…Hamilton Spectator

Make a Pledge for the ‘Spec’