Most of the pioneer obituaries found in the newspapers are for men which is unfortunate because we are always searching for more information about our female ancestors. For the month of October, the obituaries for pioneering women outnumber the men.  And great pioneers they were, making great contributions within their communities and all living to very old age. But none lived longer than Margaret Walker (nee Brown) of Hamilton. Passing away in 1939, Margaret reached the age of 104 and remained healthy almost to the end.

Mark NICHOLSON: Died 27 October 1889 at Warrnambool. Mark Nicholson was born in Gloucestershire in 1818 and arrived at Port Phillip in 1840. Rather than practice his profession of law, Mark chose to run cattle at various stations across the colony. In 1848, Governor LaTrobe selected him to act as a Justice of the Peace at Warrnambool and in 1853 he was elected as the Warrnambool and Belfast (Port Fairy) representative in the Victorian Legislative Council. In the following years, Mark spent time in England but returned to Warrnambool to settle in 1873. A full biography of Mark Nicholson is available at the Australian Dictionary of Biography.

John BEST: Died 9 October 1907 at Portland. John Best was born in Ireland in 1835 and arrived at Portland in 1857 aboard General Hewitt. He travelled with his parents William and Letitia Best and his six siblings. The family settled at Heywood and John took up work as a carrier. Later he built bridges and roads for the local Shire. He purchased a farm at nearby Mt. Clay and he remained there until his death. He left a widow and seven children.

William SCOTT: Died 7 October 1909 at Wallan. William Scott arrived in Victoria for the gold rushes and settled in Camperdown around 1860. He took an active role in local politics, serving on the Hampden Shire Council. He was also secretary of the Camperdown P&A Society. There was barely an organisation around Camperdown that did not have William Scott on the committee. His obituary read,

In him has passed one of the rugged pioneers who came magnificently equipped physically, and with the indomitable energy and capacity for sustained effort responsible for the remarkable development that has marked the brief history of this country.

Williams remains were returned from Wallan by train and he was buried at the Camperdown Cemetery.

Euphemia McLEOD: Died 3 October 1914 at Purnim.  Euphemia McLeod was born in Scotland around 1826 and travelled to Australia on the Edward Johnston around 1854. She eventually settled at Purnim with her husband George Crowe and she lived there for fifty years. Euphemia left three daughters and a son.

Ann Rebecca EAGAR: Died 12 October 1917 at Hamilton. Ann Eager was born in Devon, England around 1832 and sailed to Adelaide in the mid-1850s. It was there she married George Rowe and they made their way to Victoria, settling at Wickliffe. They remained there for around thirty years before taking up residence at Hamilton.

Only six months before her death, Ann and George had celebrated their diamond wedding anniversary.  An article appeared in the Ballarat Star of 14 April 14, 1917 reporting on the couple’s anniversary. It told of George’s work as a builder. He worked on several notable buildings in the district including the Coleraine Catholic Church and the Argyle Arms Hotel in Hamilton. During the war years, Ann supported the cause, knitting socks for soldiers and by the time of her wedding anniversary, she had knitted 120 pairs of socks. Ann and George had three sons and two daughters, twenty-eight grandchildren, and seventeen great-grandchildren.

Margaret BROWN: Died October 1939 at Hamilton. Margaret Brown was a great Hamilton pioneer living until the grand age of 104. In her last years, her life was documented as she reached milestone birthdays.  Margaret was born in Launceston in August 1835 with her parents having come from Scotland in 1830. The family sailed to Victoria around 1840 aboard the City of Sydney and in 1852 Margaret married Thomas Walker at Portland. During the mid-1860s, they settled at Hamilton where they remained. They had eight children, but two died as infants.

When Margaret was ninety-eight, she was given a walking stick but she had not used it by the time of her ninety-ninth birthday in 1934. That was also the year of the Portland Centenary and Margaret attended the town’s celebrations. During that year, she had also produced seventeen pieces of eyelet linen work. In 1935, Margaret’s 100th birthday celebration was held at the Hollywood Cafe in Hamilton with the Mayor of Hamilton, Cr. Stewart, in attendance. She also planted a commemorative tree for Victoria’s centenary celebrations. For her 101st birthday, twenty-five friends and family gathered at Margaret’s home at 5 Shakespeare Street. The highlight was a birthday cake with 101 candles. The next three birthdays were celebrated quietly at home. but Margaret continued in good health. That was until only weeks after her 104th birthday when Margaret became more fragile, eventually passing away in October. During her life, Margaret saw the reign of six British monarchs. 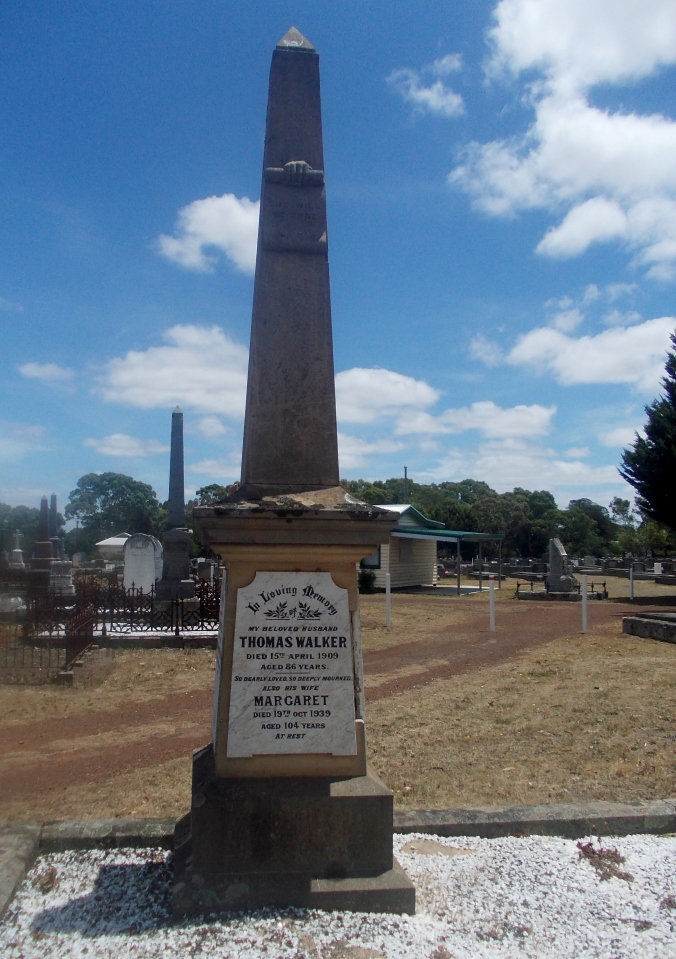 Elizabeth SILVESTER: Died 7 October 1940 at Noorat. Elizabeth Silvester was born in England around 1852 and arrived in Cobden with her parents as a two-year-old. She ran a business in Cobden for fifty years and attended the Cobden Methodist Church. Married to William Gilham, Elizabeth left two sons at the time of her death, one of whom she lived with at Noorat for the last year of her life. She was buried in the Cobden Cemetery.

Robert Thomas SILVESTER: Died 7 October 1943 at Portland. Robert Silvester was born in Merino in 1862 but as a young man, he moved to Portland and trained as a solicitor. He worked in the partnership Lynne, Silvester, and Fielding before going into practice alone. From 1910-1920, Robert was president of the Portland Racing Club and was also president and captain of the Portland Golf Club.  Robert was also a member of the Portland Bowling Club and the following link is for an obituary from the club –   http://nla.gov.au/nla.news-article64386872

Catherine McCLURE: Died 29 October 1952 at Camperdown. Catherine McLure was born at Mepunga in 1866, the daughter of James and Eliza McLure, early pioneers of the Warrnambool district. In 1885, Catherine married  Benjamin Jeffers at Warrnambool and they moved to Strathbogie. They later returned to the Western District and lived at Timboon, Kellambete, and finally, Chocolyn where they resided for forty years. Catherine enjoyed making toys with her five grandchildren and ten great-grandchildren and telling stories of days past.