Still on the subject of Charles James Harman, this is an interesting snippet from the Townsville Daily Bulletin of September 3, 1930.

In the 1920s,  Charles, his wife Lavinia Fisher and daughter Mary travelled to London for Charles to take up a post with the R.A.A.F. at the R.A.F. headquarters.  His position was terminated in 1930 and the family returned to Melbourne.  The world was in Depression and while this was not the apparent reason for Charles’ role ending, it was probably a good time to return home.

According to Lavinia, even if Australians in London had money in the bank they could only access their funds after a 60 day waiting period.  The jewellery had to go with women selling off their valuables, probably at a deflated price, just to get some cash to survive. 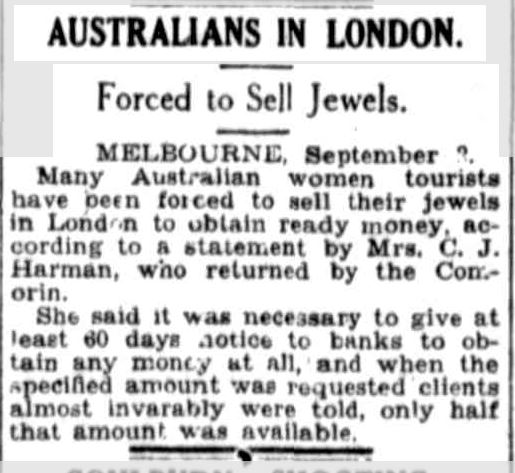