It’s been 18 months since our Portland visit and I’m still trying to find a moment to share some photos.  Recently I got around to writing the Portland Botanical Gardens post after it sat in my drafts for months with just photos waiting to be fleshed out.  It’s the fleshing out that is my downfall as you will see soon see.

While in Portland, I stole myself away and took the Portland Historic Buildings walking tour.   Incredibly for a town of its size, there are more than 200 buildings in the Portland CBD that date back to the 1800s.  It was on that self-guided tour that I found “Claremont” at 65 Julia Street, just along from the St Stephen’s Church. 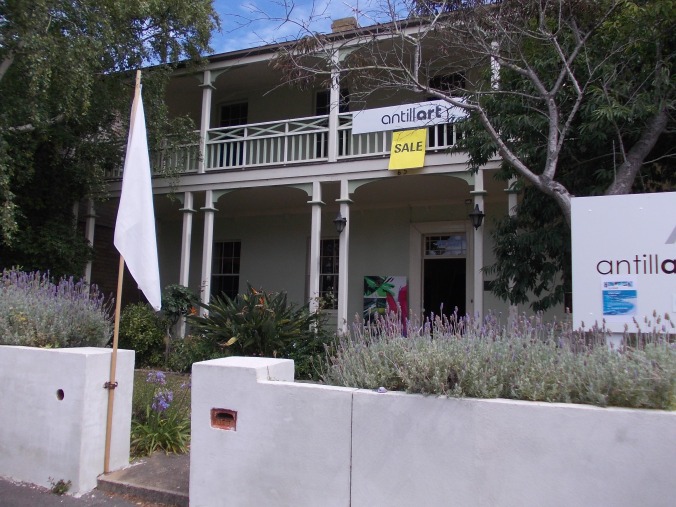 I had only intended to share the photos of Claremont and give a small amount of information about the former residents, but as usual, once I got searching at Trove I couldn’t leave it at that.  There was very little information about Claremont elsewhere online, save for an entry on the Victorian Heritage Database only identifying the person who had the house built and an early resident, the information I had from the walking tour guide.  But once again, it was Trove that took the story of Claremont an extra step.  Or two.

Stephen George Henty had Claremont built in 1852 and rented the property to his brother Francis. 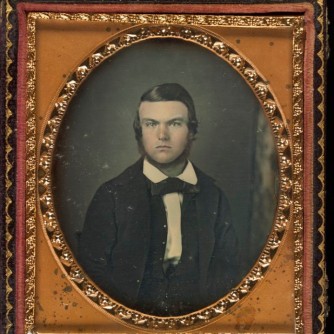 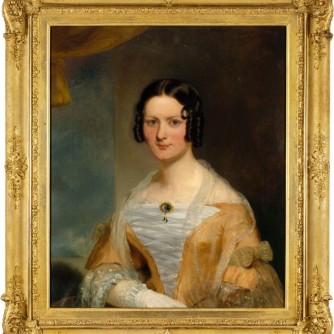 Francis and his wife Mary Ann Lawrence only used Claremont as a seaside residence. Their country residence was Merino Downs station and city residence Field Place in Kew, Melbourne.  There is something about the staircase in the foyer of Claremont.  Maybe because I can imagine the likes of Mary-Ann or her daughter Caroline, sweeping done the stairs in their crinolines while in summer residence.

As Claremont was not used as a permanent home there was not much to be found about it in the papers until 1889 when Francis Henty passed away at Field Place. He left all his Portland property daughter Caroline Henty (1849-1914) along with the furniture and effects within Claremont.

At some stage, the ownership of Claremont must have passed from Stephen Henty to Francis Henty, in order for Francis to bequeath it. Stephen Henty died in 1872 but I haven’t found any evidence of transfer of ownership.

In 1900, the sisters registered a Deed of Partition and Merino Downs was split into three separate properties, Merino Downs, Talisker and Wurt Wurt Koort with thesisters having a property each.  Caroline took charge of Talisker estate.

Caroline was quite a catch and a year after her father’s passing she married  Alexander Magnus McLeod (1846-1910), not a bad catch himself.  With Caroline and Alexander living at Talisker estate, Alexander’s spinster sisters Catherine (1845-1919) and Constance (1859-1934) and, at times, his bachelor brother Wallace (1855-1919) took up residence at Claremont.

The McLeods were the children of John Norman Mcleod and Agnes Patterson.  John owned Castlemaddie at Tyrendarra and Maretimo at Portland.  Incidentally, John purchased Castlemaddie and while he was waiting for the sale to go through, he had Maretimo built.  Constance was born at Maretimo in 1859. 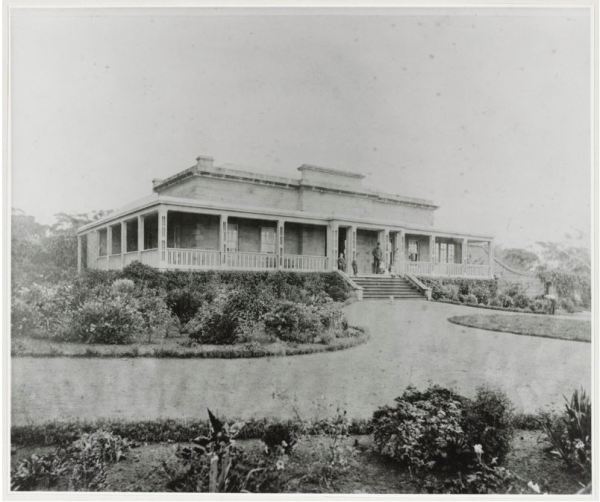 While I can’t find when Alexander McLeod’s siblings went to live at Claremont, at least one Miss McLeod was in residence in 1902, although she was heading off for a summer holiday.

Another possible guide was the death of the McLeod sister’s mother Agnes Patterson in 1901.  Her obituary stated she had moved into town from Castlemaddie and passed away in Julia Street.

There was also a death of a baby at Claremont in 1904.  I did try to find a link between Phyllis Mary Crawford and the McLeods or the Hentys, but after a quick look without success, I gave up.  The story was getting deep enough.

“Claremont” hosted the St. Stephen’s girls’ confirmation class in April 1909 and they gave thanks to Catherine and Constance for making their confirmation veils.

Significantly, the Portland branch of the Australian Women’s National League was established during a meeting at Claremont in January 1911.

Through the years, the  McLeod sisters occasionally ran advertisements looking for staff.  In 1912, a general servant was required.

In 1914, Caroline McLeod (Henty) passed away.  Her probate documents listed Claremont and the two acres of land it stood on to the value of £160,000.  Her estate was placed in trust for her two daughters Caroline Agnes Henty McLeod (1892-1943) and Alexandra Frances Henty McLeod (1894-1943) aged 22 and 20 respectively at the time of their mother’s death.  In the meantime, the girls’ aunts and uncle continued to live at Claremont.

In July 1919, Wallace McLeod passed away aged sixty-four at Claremont.

The death of her brother and sister in such close succession led Constance to reconsider her future at Claremont.  On 9 June 1920, she held an auction of furniture.

A week later, her friends gave her a send-off in St Stephen’s Parish Hall (below).

Constance was going on an extended holiday.  She was most likely heading to New Zealand to stay with her sister Jessie, married to Frederick Loisel.  Jessie was present at the send-off and lived in New Zealand by that time. 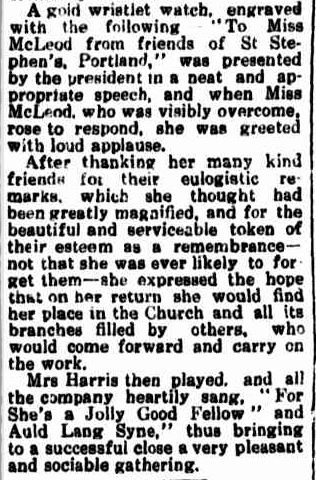 In 1934,  Constance passed away in New Zealand.  She and her sister Jessie had just departed Hamilton, New Zealand bound for Portland for the Portland Centenary Celebrations when Constance fell ill and died. 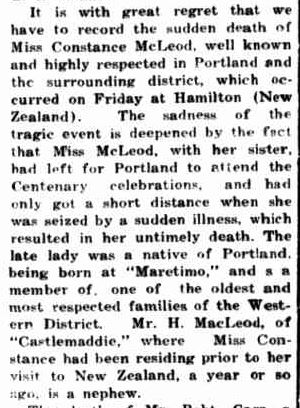 After the deaths of Wallace and Catherine and the departure of Constance, Claremont was vacant.  In June 1920, the estate of Caroline Henty advertised Claremont for lease by tender with a term of three years.

Taking up the lease of Claremont in 1920 was Caroline Florence McLean, daughter of Hector McLean and Mary Ann Humphries of Casterton.  Only a year after her arrival another death occurred at Claremont, that of returned WW1 soldier Benjamin Byard. Reading Benjamin’s War  Service Record I found he only made it as far as England when he fell ill with tuberculous.  He spent time in hospital in England before returning to Melbourne and was again confined.  Once released he travelled to his hometown of Casterton to meet up with friends.  It was suggested to him he visit Portland and he ended up at the home of Caroline McLean.

When I initially found this story, I couldn’t understand how Ben just seemed to pitch his tent in Claremont’s front yard. Finding out more about Caroline and her Casterton link went a long way to explaining how Ben chose her front yard.

It was a happier time at Claremont in June 1922, when Maud McLean of Casterton, Caroline’s sister, married James Anderson of East Malvern, at St Stephens Church.  The wedding breakfast was held at Claremont. 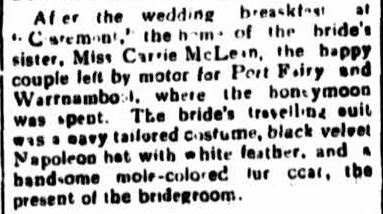 After seven years at Claremont, it was time for Caroline to move on.  Afternoon tea was held as a send-off.  One of the attendees was Sarah Wadmore, author of Portland’s Pioneer Women’s Book of Remembrance.

After the departure of Caroline McLean, Claremont was put up for sale as a guest house.

By November 1927, Claremont as a guest house was accommodating professionals such as Nurse Francis the Chiropodist.

There were vacancies at Claremont in June 1929.

While I can’t find who owned “Claremont” at this point, I do know that Janet Kosch took over the registration of the boarding house in 1930.  Prior to that, there was a Mrs McIntosh and then Norman McIntyre holding the registration.

In 1934, the two acres of land that made up the “Claremont” property was subdivided.  Again it is not clear who the vendor was, the Henty estate or a new owner from a possible sale back in 1927. 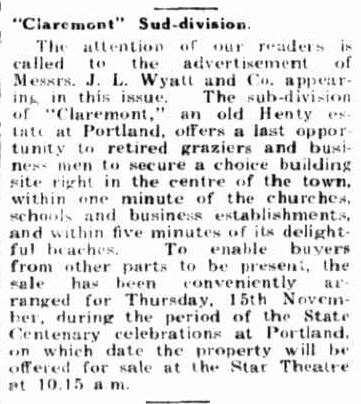 Mrs Kosch was still running the Claremont guest house in 1943 when her son visited while on leave from service.

Claremont continued on as a guest house to at least 1954. In more recent years it has been a bed and breakfast and an art gallery, as it was when I visited. It has also been for sale.  The listing is seen on this link:  http://www.homehound.com.au/65+julia+street+portland+vic+3305/   Externally, over the years both the fence and slate roof have been replaced and the verandah modified more than once. 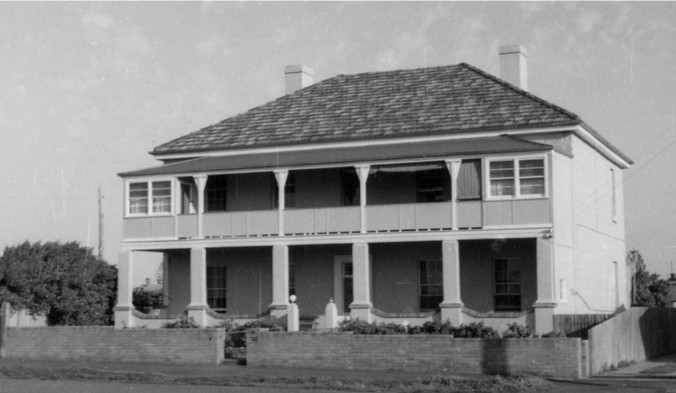 In at least the first 100 years of existence Claremont was many things but never a family home.  Children weren’t raised under its roof or played in the yard. Memories were never kept of a treasured family home.  It was always a temporary house, even when the Misses McLeod and Miss McLean were in residence.  Now. at the end of my search, I think the reason I kept digging for information is that I wanted to find Claremont as a home, not a just summer residence or a guest house, but I never did.