It’s Christmas Day and Trove Tuesday so of course I had to find a Christmas treasure.  It seems right the two share a day as every day researching at Trove is like Christmas Day!

Although I have spent the past two weeks presenting Christmas from the 1900s to the 1950s with the help of newspapers articles from Trove, there are still many Christmas treasures waiting to be found.  I narrowed it down to two favourites and since it is Christmas, I thought I would share both.

The first item is a poem from the Geelong Advertiser of December 26, 1849.  The poet, “W.A” was from Little Scotland, Geelong.  Little Scotland later formed what is Geelong West today. During the 1840s the  Gamble family lived in nearby Kildare, which also became Geelong West. 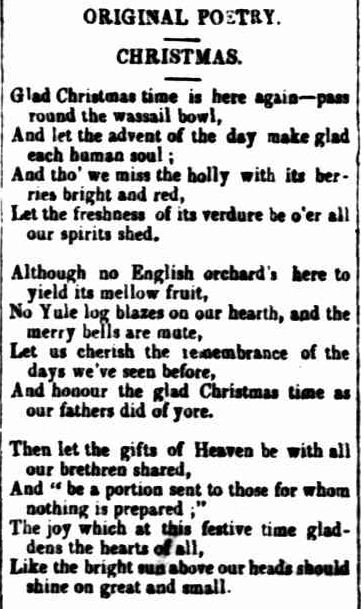 As one of my favourite Trove Tuesday posts was about a magpie and they are one of my favourite birds, I couldn’t go past this next item from the Australian Town and Country Journal (NSW) of December 22, 1888.  A beautiful drawing and a Christmas poem to match.