As John Finn Kirby led his 3yo colt from the Mount Gambier show ring in 1908 judged as Best 10 Stone Hack, most would not have considered the same horse would be led in as the winner of the Melbourne Cup three years later, almost to the day. But John Kirby had a dream, and his “10 Stone Hack”, The Parisian, was one of several new horses he had purchased with the potential to complete the task.

John Finn Kirby was born at his father’s Springbank station, near Casterton, in 1858. His father, Edmund Kirby, was born in Northamptonshire and was one of the early settlers at Casterton, as was John’s Irish-born mother Mary Finn. John and his sister Ellen each received their mother’s surname as their middle name.  As was the way for the sons of the early pastoralists, John was sent away to school, Ballarat College the choice.  He then spent seven years working as a stock and station agent in Ballarat.

At age twenty-four, John went to work for Smallpage’s Stock and Station agents in Coleraine and after a year, he bought the business. By 1883 he was secretary of the Coleraine Racing Club. In June 1885, John married South Australian girl Elizabeth Crowe, daughter of the late Edmund Crowe and Johanna Crowe, owners of Mingbool Station near Mt Gambier. The wedding was a social highlight in the town, creating much interest.

In 1888, John purchased Mt Koroite Estate near the Coleraine racecourse.

In August 1889, Johanna Crowe passed away, resulting in an interesting battle over her will, which ended in the Adelaide Supreme Court. The estate, worth £80,000, was settled with embattled son John receiving £10000 and daughter Elizabeth, Mrs Kirby, receiving half of the balance.  Her children received the other half of the estate.

John began to spend time between Mt Koroite and Mingbool.  He’d been breeding and racing horses for a couple of years, but with the use of Mingbool, his interests grew and in 1890 he established the Mingbool Stud, primarily breeding sheep but also horses and cattle. An article from the Border Watch on 18 February 1903, reported Mingbool ran 19,000 sheep, 500 head of cattle and 100 horses.  From the same article,

By the middle of 1908, John Kirby had acquired three promising young thoroughbreds, Halloween, Benderay and The Parisian. Benderay was the pick of the trio, brought by Kirby in Dublin, Ireland. He eventually sold the out of form horse in 1912.  Halloween showed a little more promise and picked up a few races for Kirby, but he sold him at auction in 1911. That left The Parisian, bought by Kirby in 1907 at the Melbourne Yearling Sales. His sire was Bobadil, winner of the 1899 Australian Cup and Champion Stakes, and his dam was The Parisienne. 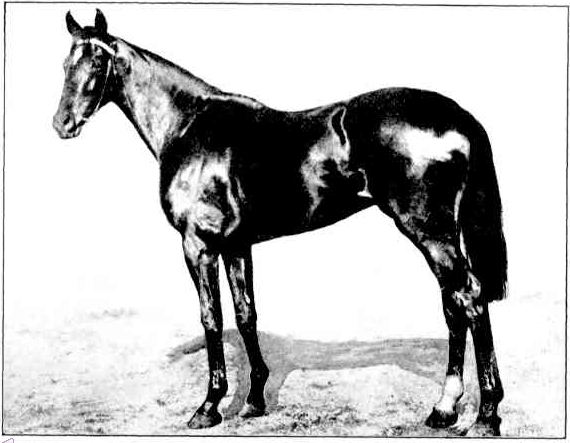 After his victory in the show ring in 1908, The Parisian was in full work by January 1909 with trainer Ernie Hartwell.

One of his early races, if not his first, was a six furlong Maiden Plate at Sandown Park on 7 April 1909, where he ran fourth, beaten by over ten lengths. The Parisian scored his first victory on 19 April at the Mentone Races, and he backed up an hour later to attempt a double.  An undecided outcome in the second race led to a third race at the end of the meet.

Despite his breeding, the horse was only racing over shorter distances with little success and Kirby sent him to auction.  The great jockey Bobby Lewis, in later years, recalled that time.

Wheeler took the lead of James Agnew and placed The Parisian over longer journeys and he nominated both The Parisian and Halloween for the 1910 Caulfield Cup and Melbourne Cup not long after their arrival in the Wheeler stable. On October 1, The Argus newspaper’s ongoing summary of the Cup candidates featured The Parisian. With ordinary lead in form, it looked unlikely The Parisian would line up in the Caulfield Cup, with the Melbourne Cup a better option. It was also noted in his last race he struck himself and had a few days off work.

The Parisian did not recover fully from his injury of a cracked heel in time for the 1910 Melbourne Cup, and he was scratched.

The Parisian’s first win of any note was the 1911 Australian Cup.  The lead-up to the race was eventful.  Scheduled to run on 7 March, heavy rain leading up to the race saw the meeting postponed and rescheduled for 9 March. However, the rain did not let up, and the race was again rescheduled for Saturday 11 March. Considered a weak field, there were only fourteen runners, and The Parisian was sent out as the second favourite. As the field turned into the Flemington straight, The Parisian drew clear and won by six lengths, easing up. 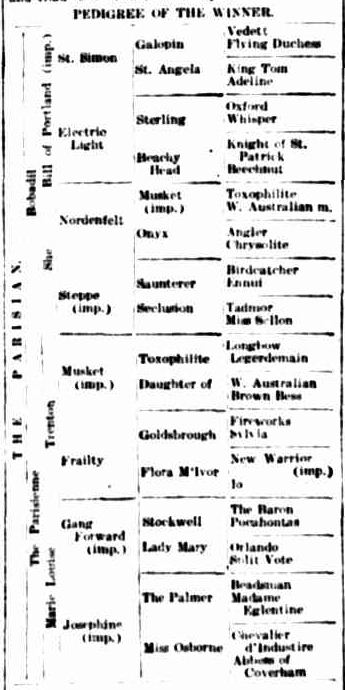 The Parisian then went off to the Sydney Cup, but he was not fully sound and struggled into twelfth. 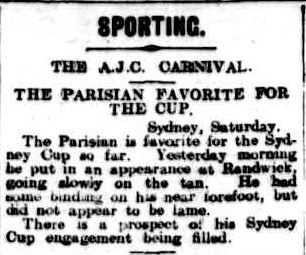 The next big race set for The Parisian was the 1911 Melbourne Cup. 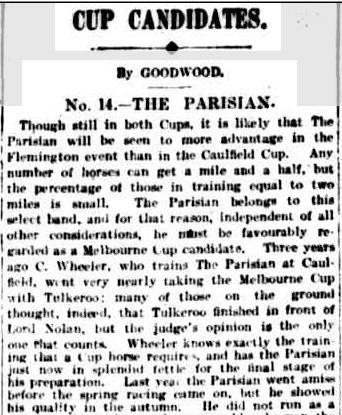 In the week leading up to the race, The Parisian again had heel problems and couldn’t put his hoof to the ground. Again, it looked like he would be scratched.  Charlie Wheeler put the horse in a small paddock full of capeweed next to the stables. The move paid off for Wheeler and on the morning of the race, The Parisian was galloping madly around his paddock trying to avoid capture.

A record crowd of 115,000 people headed to Flemington for the 51st running of the Melbourne Cup.

Trafalgar was favourite and The Parisian with Thomas Ronald Cameron aboard was the second favourite in a strong field. The thirty-three horse field jumped and went fast early and as they passed the judge’s box for the first time, the field was well strung out.  The Parisian started making a move coming into the straight for the last time, but Cameron waited, not giving the horse his head until the very last. There was no doubt though, as The Parisian overtook the leaders and won by two lengths, although many thought it was more.  The win was later described as “hollow” and “soft”.

After weighing in, Thomas Cameron was mobbed by stable boys and other jockeys. Meanwhile out in the birdcage, John Finn Kirby’s dream had come true. He was the owner of a Melbourne Cup winner and his delight was clear.

Reflecting twenty years later, Charlie Wheeler revealed the key to training The Parisian for the Cup. 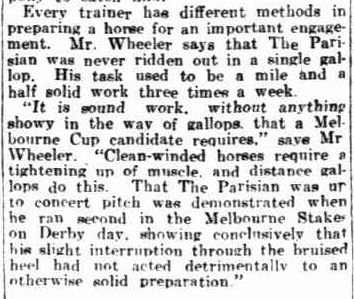 In the days after the Cup, The Parisian was sent to Bacchus Marsh for a spell while John Kirby collected his winnings on “Settling Day” at the Victorian Club. His winnings from the bookmakers were thought to be around  £40,000. The stakes from the Cup were another £7000, although Wheeler, as the lessee, would have received the bulk of that. The Victorian Heritage Database notes around that time, Mt Koroite Homestead received extensive renovations and extensions, presumably from Kirby’s winnings. He had a manager and many staff, including a resident Chinese gardener and a chauffeur, Archie Gunning, who drove Kirby’s car, one of the first cars in the district.

An Autumn 1912 preparation was on the agenda for The Parisian including a chance to repeat his win in the Australian Cup, for which he was the favourite. Unfortunately, his cracked heel again gave him trouble, and he was sent to the paddock, missing all engagements. Brought back for the Spring Carnival, The Parisian ran in the Memsie Handicap first up but needed the run.  He returned in the Rupertswood Handicap where he showed more but was tender after the race. During the following week, The Parisian pulled up lame after track work and Charlie decided to end his Spring campaign.

The Autumn Carnival of 1913 arrived and once again the Australian Cup was set down for The Parisian.  Punters were wary, given the ongoing query about the horse’s soundness. Their caution paid off when The Parisian’s cracked heel again saw him turned out.

It would have seemed unlikely The Parisian would return for the 1913 Spring Carnival, but as a gelding, he did not have a stud career before him and he returned to the track again.  Reports came in early October that he had gone amiss, however, he still ran in the Caulfield Cup on 18 October. There were rumours the horse had problems and would be scratched. However, Charlie Wheeler insisted the horse was fine and ran him. The Parisian ran a creditable fourth but pulled up lame.

Wheeler’s patience was wearing thin, and he advised John Kirby the horse should be turned out for the rest of the spring. Eventually, in early November, Wheeler returned the horse to Kirby, and The Parisian looked set to retire.

However, in January 1914 it was reported The Parisian would return to racing in the Western District but not before he raced in the Australian Cup in March.

Plans changed again as Charlie Wheeler began an Autumn 1914 preparation with The Parisian. After a few starts, Wheeler finally gave up and once and for all returned The Parisian to Coleraine.

At last, the type of retirement a Melbourne Cup winner deserves looked likely. Nothing of The Parisian racing appeared in the racing pages until just under three years later.  On St Patrick’s Day 1917, The Parisian returned to racing at the Coleraine Racecourse across from Kirby’s Mt Koroite Homestead.  With a hefty weight of 14 stone 9 lbs, the heaviest ever carried at Coleraine, and ridden by, of all people, John Kirby’s chauffeur Archie Gunning, The Parisian broke down again. 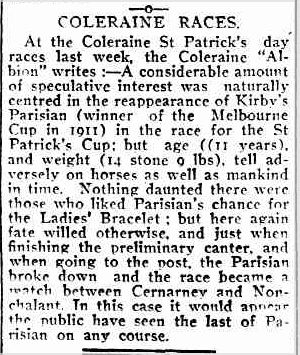 There was little doubt The Parisian had run his last race and around two months later, the sad news came that The Parisian had been euthanised.  Reports stated it was because of a start at a picnic meeting in the Western District. With no reports of the horse racing between March and May, it would have to be assumed his injuries were because of the unreasonable task he was given on St Patrick’s Day at Coleraine when his only purpose in racing was to attract a crowd. 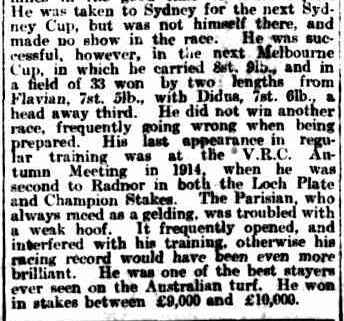 This snippet from Broken Hill’s Barrier Miner four years before The Parisian’s death foresaw what was to come. After two unsuccessful preparations and three years presumably in the paddock, the horse needed to earn more oats.  One would have thought as a Melbourne Cup winner he had earned more than a lifetime’s supply. 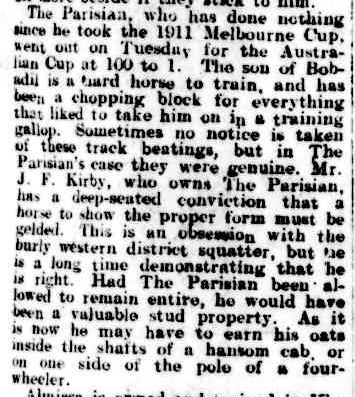 A sad end for a brave horse.

John Finn Kirby passed away in Portland on 7 April 1942, aged eighty-four. His wife Elizabeth had passed away twenty-one years earlier at the Kirby home “Koroite” in Kew, Melbourne.  History shows The Parisian was the best horse Kirby owned, save for Napier a winner of the Great Eastern Steeplechase at Oakbank and the Grand Annual Steeplechase at Warrnambool. 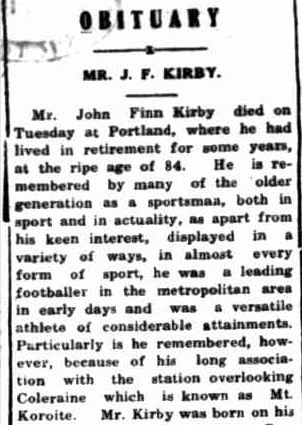 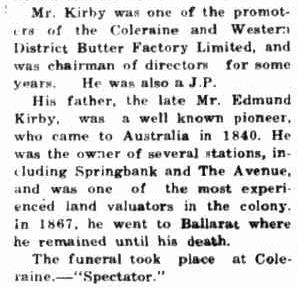 John, Elizabeth and their daughter Lila are buried at the Coleraine Cemetery. 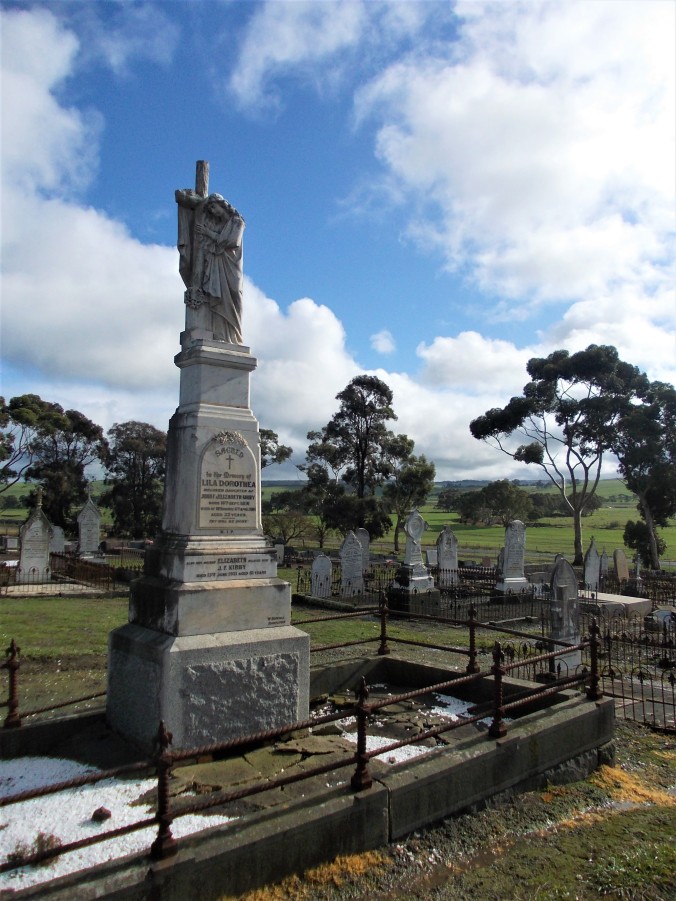