As Passing of the Pioneers enters a second year, the fascinating stories keep coming.  Who could not be taken in by James Parker’s story? Gold, Captain Moonlight and more than a stroke of good luck make it an interesting read.  Or Octavius Palmer? While still a teenager, he travelled to California and took on the risky job of gold escort, while Mrs Isabella Gilholme’s business sense saw her acquire a portfolio of shops and houses.

Hannah BIRCHALL: Died July 1889 at Bridgewater.  I have mentioned Hannah Birchall before. In the News -May 26  was about the passing of Mrs Hugh Kittson who was Margaret Jennings, daughter of Hannah. Hannah’s husband, Margaret’s father, was Cook Abraham Jennings. Hannah and Abraham arrived in the district during the 1840s.

Amelia PITTS: Died 11 July 1897 at Myamyn. Mrs Dudden was known by many around Myamyn due to husband Stephen Dudden’s work as a storekeeper in the town. She arrived in Victoria during the 1850s. From a search at Trove, I found that only three months earlier on April 19, 1897, the Dudden’s residence, behind their shop, was destroyed by fire

James PARKER: Died 6 July 1899 at Heywood.  At the time of James Parker’s death, The Portland Guardian correspondent promised an account of Parker’s life, in the next issue. Finally, on 9 August 1899, he came good with his promise and it was worth it.  I cannot possibly summarise the life of James Parker, so you must read the obituary for yourself here.  It is a fascinating read, particularly Parker’s encounter with Captain Moonlight.  I will, however, include a piece from the obituary which describes pioneer life.  As you read, keep in mind the obituary is from 1899.

William DISHER: Died 11 July 1902 at Stawell. William Disher arrived in South Australia during the 1830s. He married Agnes Horsburgh in 1842 and during the 1870s they moved to Kewell West, north of Murtoa. William and Agnes had twelve children and by the time of his death, the couple had seventy-two grandchildren and twelve great-grandchildren.  Incidentally, William’s mother had 220 direct descendants at the time of her death at ninety-two, including 120 great-grandchildren. William’s sister was Lady Eliza Milne, the wife of Sir William Milne a South Australian politician.

John M. SHEEHY: Died July 1903 at Casterton. How I need a man like John Sheehy in my life.

John MacEACHERN: Died 4 July 1908 at Nelson. While John MacEachern had only been in the Nelson district from the 1870s, he had been in Australia since 1839 having arrived in Sydney from Scotland with his parents. He made his way to Victoria, first working at Strathdownie as a stockman, where he proved himself an excellent horseman.

Edwin BOASE: Died July 1911 at Murtoa. Edwin Boase was a newspaper pioneer in the Wimmera. He arrived with his parents in Adelaide as a baby during the 1850s before they headed to Castlemaine. He learnt the printing trade in Ballarat before moving to Horsham in 1872 where he printed the first edition of The Horsham Times. He later founded The Dunmunkle Standard and published the paper for thirty-three years until the time of his death.  He married Isabella Cameron in 1878, a daughter of a former Horsham Mayor.

Octavius Frederick William PALMER: Died 18 July18 1914 at Terang. What a life Octavius Palmer led. He was born in London in 1833 and went to Tasmania with his parents and nine siblings in 1838. His father was Captain Frederick Palmer of the East India Company.  After schooling at the Church of England Grammar School in Launceston, Octavius left for the goldfields of California where he spent three years driving the gold escort team of horses. He returned to the Castlemaine diggings and after some pastoral pursuits with his brothers, he settled in the Western District around Warrnambool.

Octavius was a member of the  Warrnambool Polo Club and the Warrnambool Racing Club. He imported many head of Romney Marsh sheep in the 1870s.  An article from The Age of September 1972, reports on the Palmer family breeding Romney Marsh sheep for 100 years with references to Octavius. How proud he would have been that his family continued to breed the sheep he preferred for the conditions of the southwest of Victoria.

I  couldn’t resist this insight into Octavius in later life. From The Mail (Adelaide), the article describes an “old buster”. 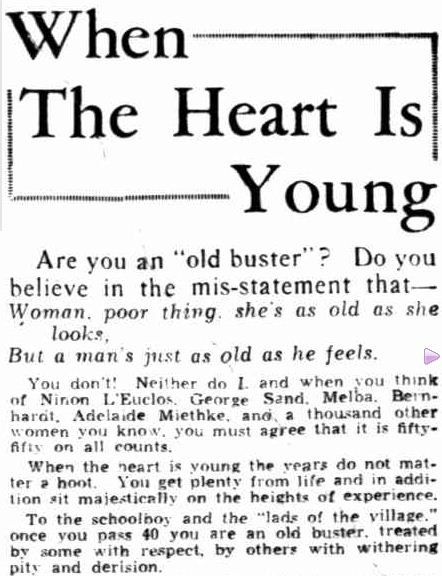 Forty seems far too young to be thought of as an “old buster”!

Thomas BAILEY: Died 23 July 1914 at Ballarat. Like the JohnGreed above, Thomas Bailey was from Taunton, Somerset.  He was born there in 1840 but at a young age, he left for the New Zealand goldfields. He then went to Ballarat where he had various mining interests. He married Sarah Craig, the daughter of Walter Craig owner at the time of Ballarat’s Craigs Hotel.

Thomas was a member of the Ballarat Anglers Club, Ballarat Hunt Club and had a keen interest in football.  His death was felt in many parts of Ballarat including the Old Colonists Hall, where, out of respect, a meeting was cancelled.

Richard BRYANT: Died 12 July 1919 at Hamilton. Richard Bryant was born in Cornwall in 1829 and married Elizabeth Millstead in 1850.  The couple travelled to Adelaide aboard the Epaminodas in 1853.  From there they went to Portland and Richard walked on to Ballarat in 1854 in search of gold.  After the death of Elizabeth, Richard and two young daughters settled on land at Mooralla.  He then married Irish-born Margaret Nowlan.  Margaret passed away in 1907.

I have a family link to Richard Bryant via a daughter from his first marriage.  Richard was the grandfather of Elizabeth Bryant McWhirter,  wife of James Stevenson of Cavendish.  James was the subject of the post “Hobbies Passions and Devotions.

I turned to Ida Stanton’s Bridging The Gap for more information about Sophia Gorte. Sophia’s husband Carl Wehl had a tannery in Stawell but owned land in Halls Gap. The house that Sophia built (as referred to in her obituary) was Glenbower 2 near Borough Huts, just outside Halls Gap. The house was so named as it was next to Glenbower owned by members of the D’Alton family, including twins Sophia and Henrietta.

That home went into ruin, however, at the time of Ida writing her book, poplars and remnants of the garden still existed.   Ida tells how the D’Altons brought the poplars with them to Australia from Napoleon Bonaparte’s grave on the island of St Helena. This is not as unusual as it sounds.  A Google search found many others who also grew both poplars and willows grown from cuttings taken from the island’s trees.  An article from The Mercury tells of a Tasmanian family who did the same.

The bushfires of 1939 saw  Glenbower 2 destroyed. There are photos of both homes in Bridging the Gap, and Sophia Wehl is on the veranda in the Glenbower 2 photo.

Sophia Wehl’s daughter was a noted artist specialising in wildflowers. Her art teacher was neighbour Henrietta D’Alton who was famous for her wildflower art and had even exhibited overseas.

Margaret Ann DIWELL:  Died July 1932 at Hamilton. Margaret was my ggg aunt and daughter of William Diwell and Margaret Turner.  She was born at Portland in 1857 and married John McClintock in 1883. They lived at Grassdale and had eleven children including John, James Richard, and Albert Edward featured in my Anzac Day post The McClintock Brothers. 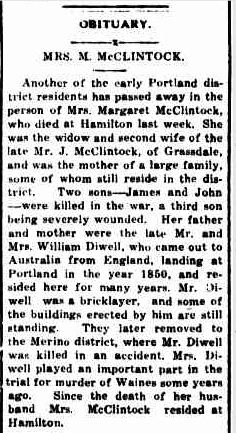 In the post, Passing of the Pioneers – A Year On, I mentioned the dangers of wrong information in obituaries. Margaret’s obituary offers an example of this. It mentions her parents arrived in Portland in 1850. They, in fact, arrived on the Duke of Richmond in 1852.  Margaret’s mother is also mentioned because of her involvement in the murder trial of George Waines.  I wrote about that trial in Witness For the Prosecution.

John Thomas EDGAR: Died 10 July 1941 at Melbourne. John Thomas Edgar was born at Portland in 1848, the son of David and Sarah Edgar. The Edgars settled at Pine Hills estate near Harrow. David Edgar subsidised a private school at the estate for the use of his children and the children of other settlers and John attended that school before going on to Hamilton College and later Scotch College in Melbourne.

With his schooling completed, John returned to Pine Hills to learn the finer points of running Merino sheep. This saw him go to on to become an expert breeder and judge of the popular Western Victorian breed.  He took over management of his father’s property Kandook Estate at Harrow and later the ownership. In 1871, John married Margaret Swan and they raised a family of twelve children. He was the brother of Walter Birmingham Edgar and a cousin to Jean Edgar, both Passing Pioneers.

Michael MURPHY:  Died 12 July 1943 at Melbourne. I have driven past Tobacco Road, Pomonal many times en route to Halls Gap and finally, I know how it got its name. Michael Murphy was a former resident of Pomonal at the foot of the Grampians.  He was one of the tobacco-growing pioneers in the area. I didn’t know tobacco was grown there, but it seems obvious now that Tobacco Road was named for such a reason.

Michael was also a supporter of local football and cricket and was a founding member of the Stawell Druids Lodge.  He was seventy-four at the time of his death, following complications of injuries received in a tram accident in Melbourne.

Isabella REID: – Died July 1953 at Heywood.  Isabella Reid was the daughter of William Reid and Johanna Steven and wife of Charles Gilholme. Isabella ran a guest house but after Charles’ death, she expanded her business interests into property. 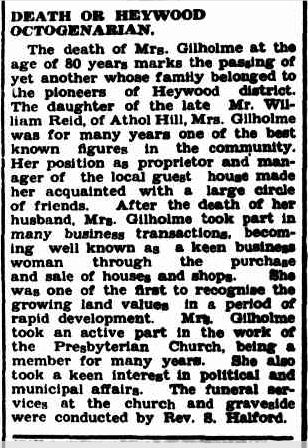