Isn’t  it frustrating when you find old family photos but don’t who the subjects are?  Not long ago Mum found some photos of Nana’s we didn’t know she had. We don’t know who the people are and we have no one to ask.

I was recently contacted by Catherine Simmins, who has family links to the Western District.  She is facing the same dilemma with some photos passed on to her family some time ago.  Some were identifiable but others remain a mystery.

Catherine asked me if I could post the photos in the hope someone may recognise the subjects.  Alternatively,  if anyone is better at dating photos than myself, help in that area would also be appreciated. 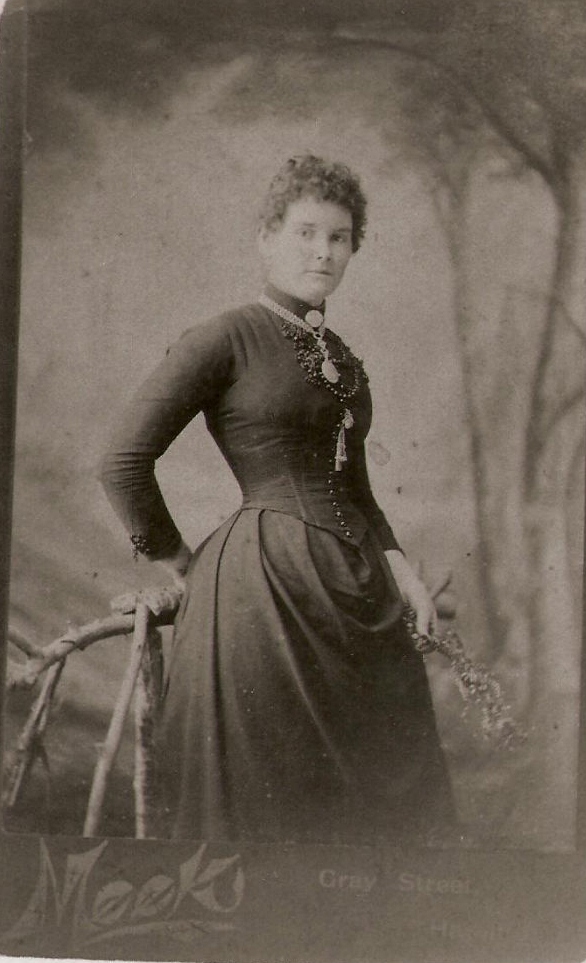 The following three photos go together.

Alfred Charles THOMAS (Catherines great-grandfather) was the son of  William THOMAS and Hannah JONES.  He was born in 1869 at Hamilton.  Alfred married Sarah Ann McPHERSON, the daughter of Angus McPHERSON and Christina McDONALD.

Alfred and Sarah had a large family of 11  children.

Alfred’s obituary lists the names of their children, their married names and locations. 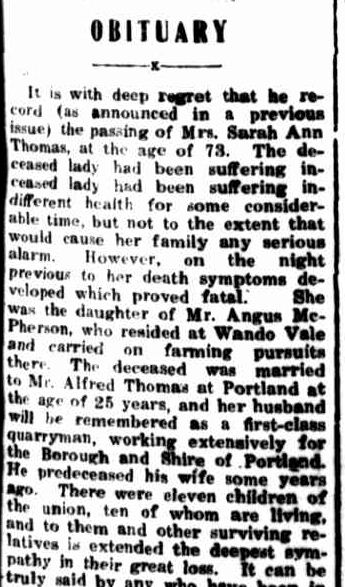 Of course, there is a good chance that the photos are not of this branch of the THOMAS family but have some link.   Catherine has offered a suggestion as to who the family in Photos 3, 4 and 5 could be.

This is the Family Notice for Donald McBean:

I think Catherine’s hunch could prove correct given the number of children, their sex and the age differences in the children.  If that is baby Dorothy McBean, the  family photo could be from around 1914.

**My interest piqued when I saw the name Mary Monivae.  Monivae, my former secondary school in Hamilton, named after the Monivae homestead, the school’s first site during the 1950s, was formally owned by Acheson Ffrench and James Thomson.  I wonder if Donald McBean worked at the property or they simply liked the name. I’ll save that one for later!

James Meek, tobacconist and photographer of Gray Street Hamilton took Photos 1 and 2.  The earliest reference I can find of Meek in Hamilton was 1884 when he played a role in the investigations of a well-known murder case of the time “The Pierrepoint Murders”.  Pierrepoint is just out of Hamilton and Meek took a photograph of the murder victim to help with the identification process.  Interestingly a member of my Bishop family found his way into one of the witness statements.

Meek also spent some time in Portland in the mid 1890s 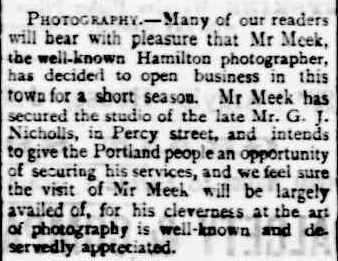 James Meek appears to have had a studio at Clunes during the early 1900s,  but I have also found references of him in Hamilton up until 1920.  There are a number of  photographs taken by James Meek at Trove

If you think you can help Catherine name the subjects in these wonderful photos, please leave a comment.  It would be much appreciated.