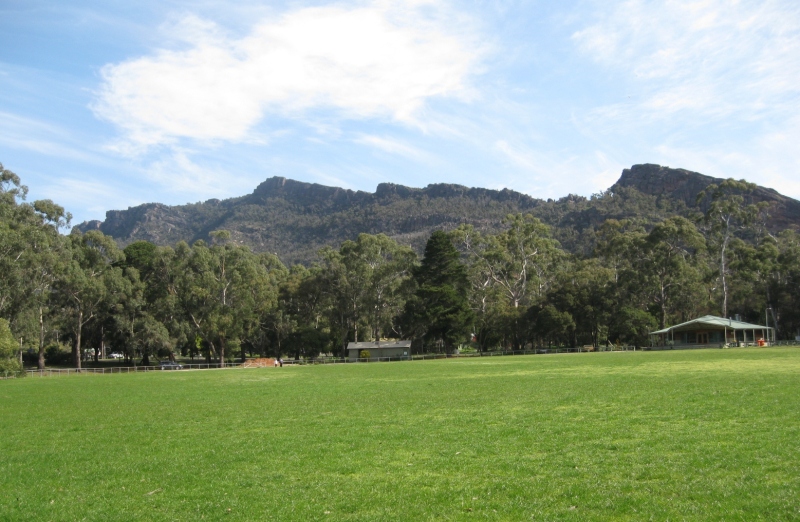 There is a special place in Halls Gap I revisited recently.

Behind the Halls Gap caravan park and just beside a track leading to places with whimsical names such as Venus Baths and Wonderland Range, lies a stark reminder of pioneering days in the little town.  Halls Gap has few visible reminders of its pioneering past, but the lonely grave of baby Agnes Folkes has seen much of the town’s history pass before it. Fire, flood, and countless tourists have passed by Agnes. 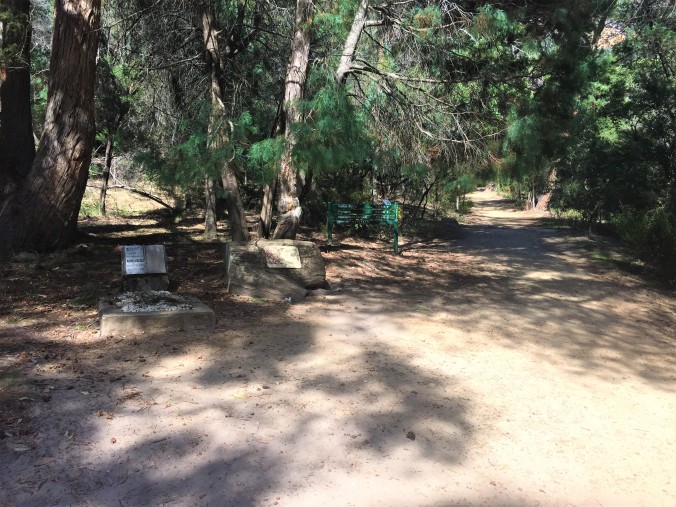 John and Phoebe Foulkes (later to become Folkes), originally from Worcestershire, arrived in Victoria aboard the Northumbria in 1853.  Ida Stanton, in her book Bridging the Gap, tells of John working as the ship’s carpenter and upon arrival, obtaining work making architraves and balustrades for the new Victorian Parliament House.  They had moved to the Grampians area by the end of the 1850s with son George born in 1858 at Moyston.

By 1870, John Folkes was operating a sawmill in Halls Gap.  The family home, made of logs, was close to the banks of the Stony Creek.   By this time, there were seven children with Phoebe giving birth to Agnes in April of that year at nearby Pleasant Creek.

After a dry autumn, the winter of 1870 saw the weather break.   Heavy rain fell across Victoria, flooding lakes, roads and rivers.  At times of heavy rain in the Grampians, water collects in the mountains, working down the many gullies and into small creeks which quickly become rivers.  One of those is the Stony Creek.  With the winter rains of 1870, the creek had risen and was impassable as were others which had to be crossed to leave the town.  The following photo is of Stony Creek close to Agnes’ grave.  Evidence of flash flooding in January this year is still present. 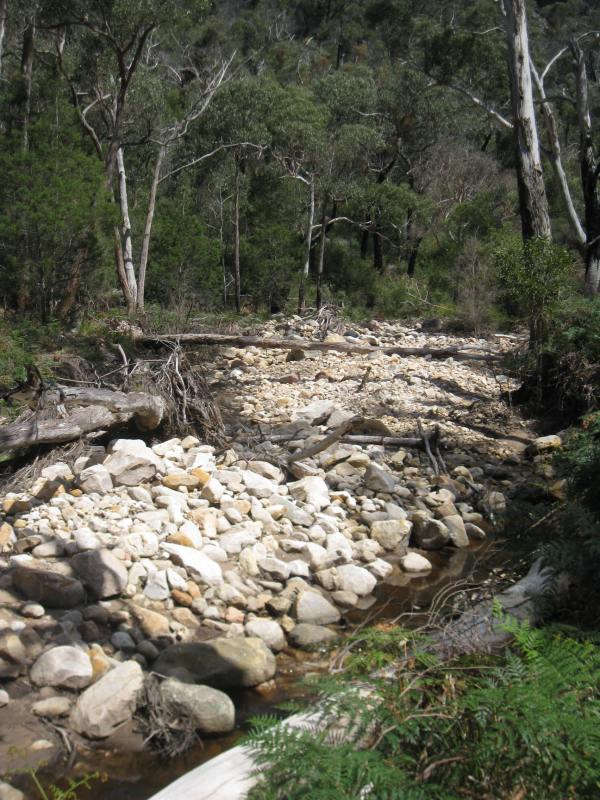 Agnes fell ill with diphtheria that winter, but Phoebe and John could not get through to Stawell and the nearest doctor.  Sadly, on 30 July 1870, Agnes passed away.  She was buried close to the family home in a tiny wooden coffin made by her father.  A headstone was added but it was replaced with something more substantial.  The timing of that was sometime around the 1930s.  The following photo from the Weekly Times in 1932 shows what would be Agnes’ original headstone. 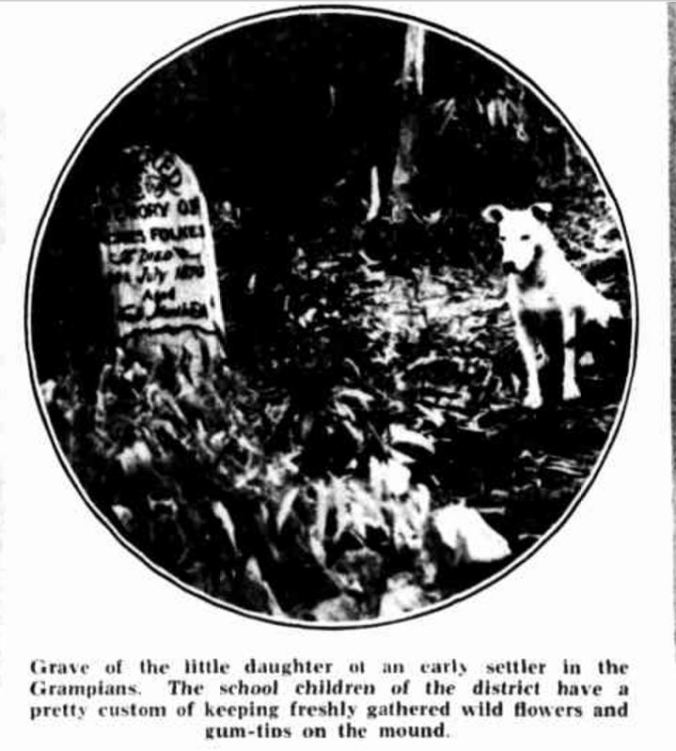 However, the following photo appeared in the Weekly Times almost two years earlier on 29 March 1930 and shows the current headstone and what looks like the original headstone lying on top of the grave. 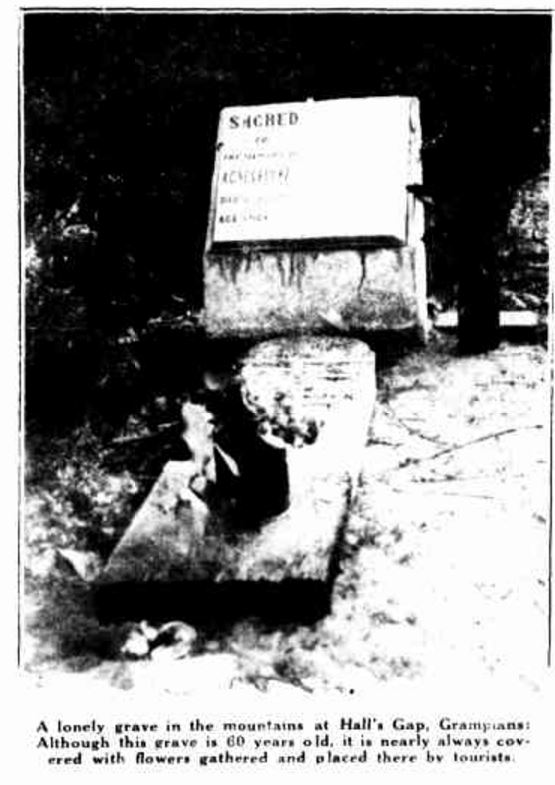 The was even a Rose Postcard made of Agnes’ grave and it looks different again. 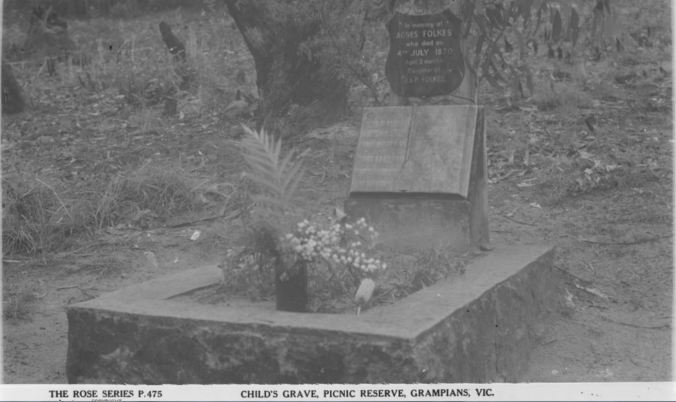 This is how the grave looks today. 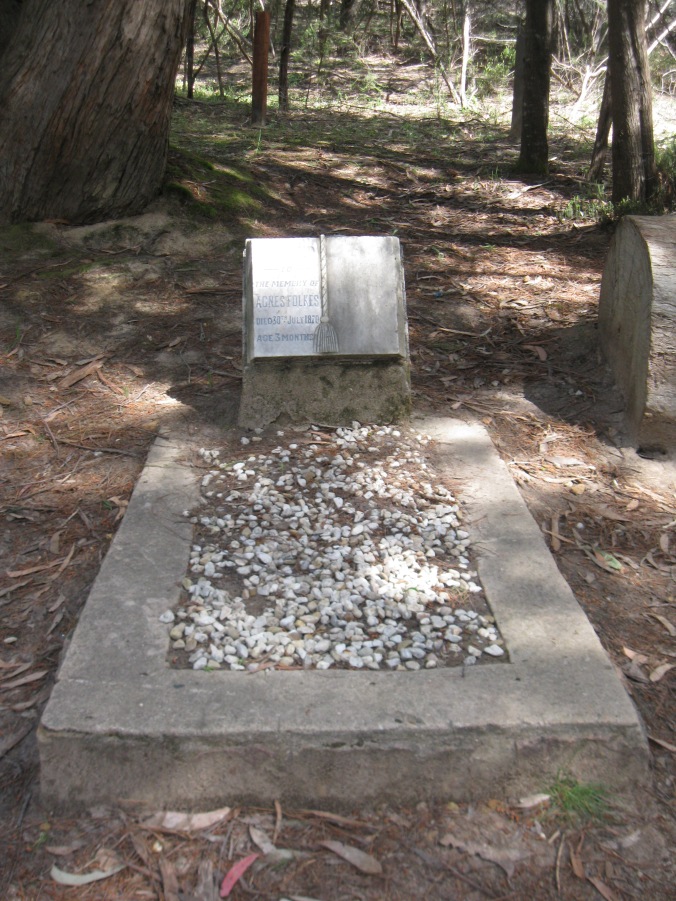 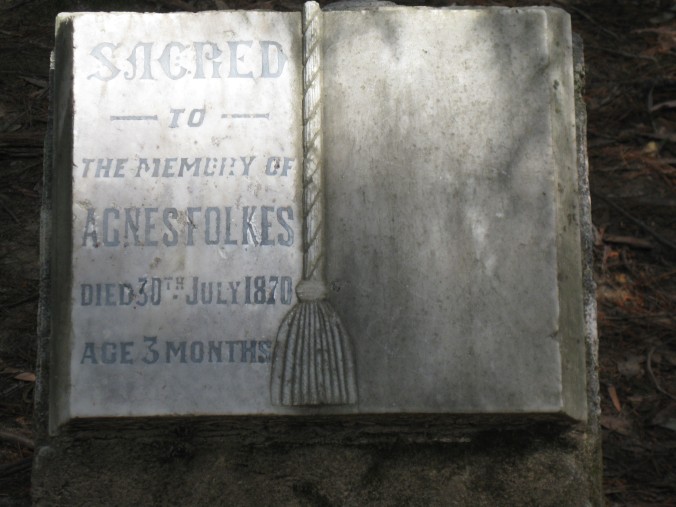 After Agnes’ death, locals began to refer to the mountain peak behind her grave as “Cherub Peak”, however, it was later gazetted as “Mackeys Peak”, after a Government minister. 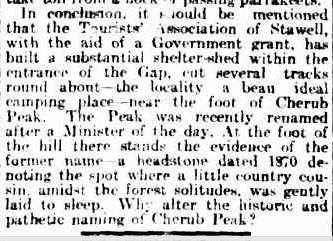 One heartwarming aspect of the story is that not only have the children of  Halls Gap Primary School tended Agnes’ grave for almost one hundred years, they more recently lobbied the Victorian Government for the name to be changed back to “Cherub Peak”.  The name has now been gazetted as a historical name and a new sign  erected to explain the history of the grave. 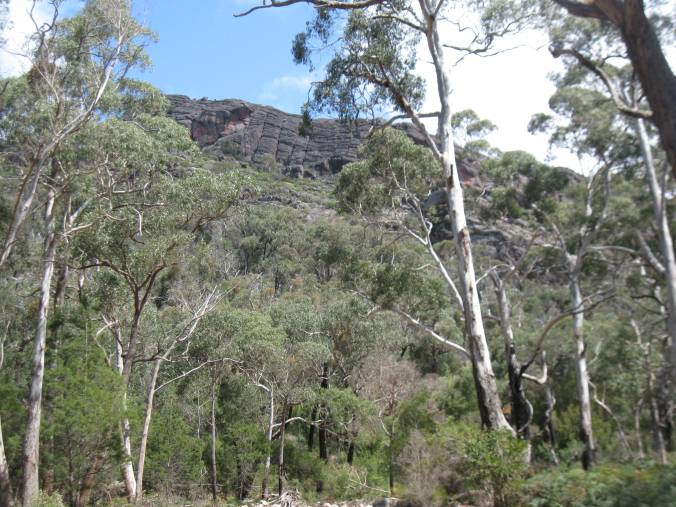 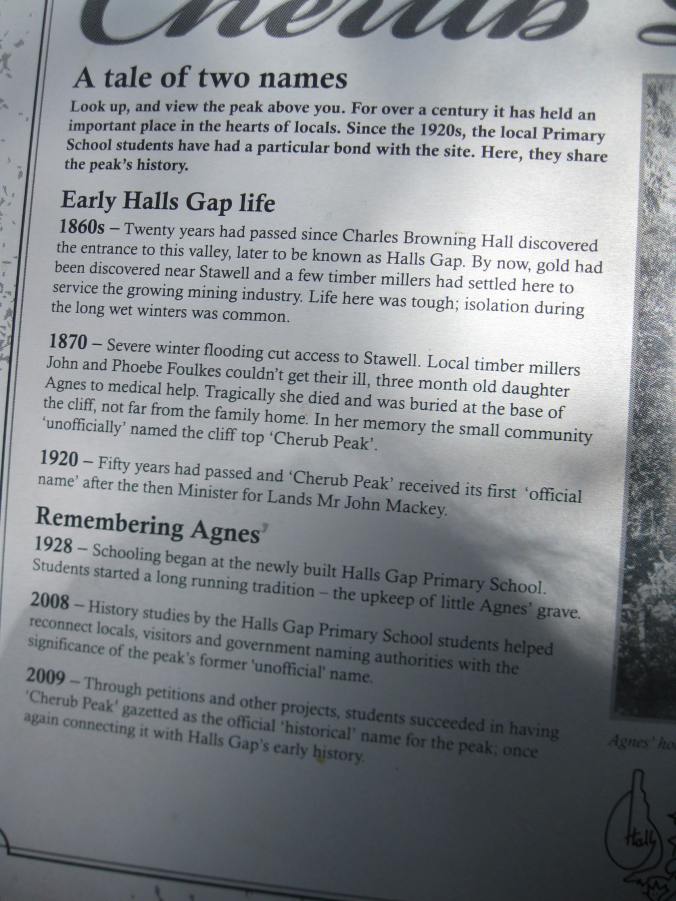 Agnes’ siblings grew up and married.  A brother and sister went on to marry children of other Halls Gap pioneering families.  Emily Phoebe Folkes married Edward Evans while George Edward Folkes married Emma Launder Delley.  Edward and Emily Evans had a son Edward who married Geraldine D’Alton, from another pioneering family.  The names of Evans, Delley, and D’Alton are still recognizable in the Gap today.  Would Agnes also have married into a well known Halls Gap family and forged her own piece of history?   Despite her short life, her grave and its reminder to visitors of the town’s pioneering times have seen baby Agnes make her mark on the history of Halls Gap.

From The Horsham Times at Trove, I have been able to source this beautiful, almost haunting article originally published in The Ballarat Courier in 1909. The words of “H.B” will come to mind next time I visit Agnes. 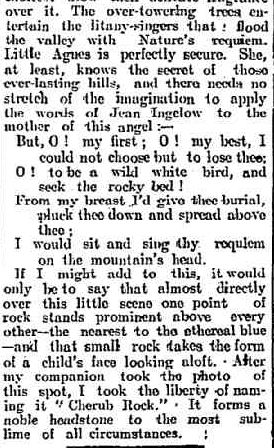 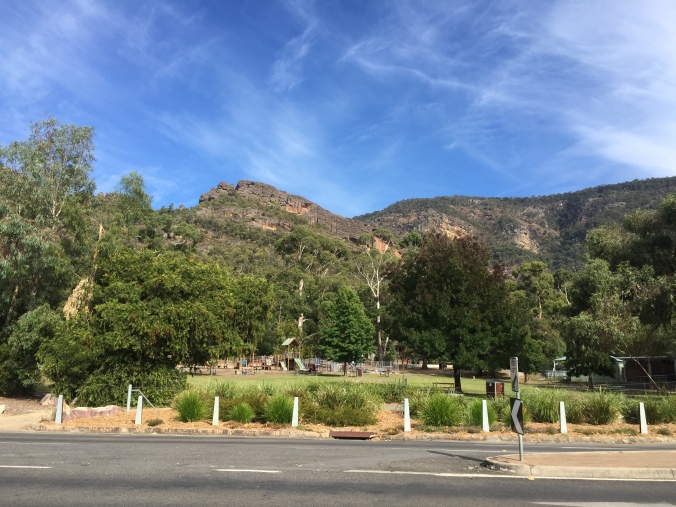 THE VIEW TOWARDS CHERUB PEAK