The Portland Guardian and Normanby General Advertiser reported on 19 June 1861 a meeting at Hamilton of the Separation Movement.  It was the first meeting of its kind in Hamilton following on from a successful meeting in Portland. 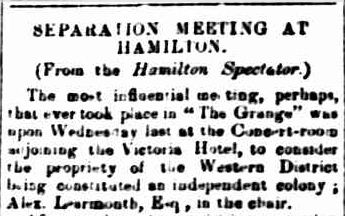 Many well-known gentlemen of the district where there, men whose names still are evident in Hamilton.  Messers Skene, Learmonth, McKellar, and McPherson were all present.

Despite a campaign that went into 1862, the move to separate was unsuccessful.

An article in The Portland Guardian on 30 March 1953 reflected on what might have been if separation had occurred.  The proposed new colony was to be called Princeland with Hamilton as the capital and Portland as the major port.  I would have been born in Hamilton, the capital of the state of Princeland, Australia.  Imagine!

Talk of separation did not go away as seen in this article from the Guardian in 1921.  A push in the Riverina area to separate in the early 1920s saw the suggestion made once again for the south-west of Victoria to also separate.