Most of my family members made it home from World War 1.  While they were far from unaffected,  they could return to their loved ones.  Not so for Arthur Holmes.  Newly married he sacrificed his life for his country following both his older brother and cousin into war.

Arthur Leonard Holmes was born in 1889 in Sandford, Victoria.  His parents were George Holmes, the local miller and Julia Harman, a Byaduk girl.  They married in 1882 in Byaduk and had seven children, with Arthur being the fifth born.  Julia died suddenly in 1896 of a cerebral haemorrhage while George was away gold prospecting on the other side of the state at Tallangatta.   The children ranged in age from fourteen to one.  George remarried in 1900 to Betsy Swain and they had a daughter, Bessie, in 1903.

Arthur, better known as Lennie, enlisted at Melbourne on 4 July 1916 aged twenty-seven.  He was working in Casterton as a coachbuilder. His brother Frederick had enlisted ten months earlier and his cousin Edgar Holmes, a year before.  At the time of enlistment, Arthur noted he was single and gave his next of kin details as his father.  At some point afterwards, this information was edited with “single” being changed to “married” and the contact details changed from father George to his new wife Alice Edith Osborne.  Marriage records show they married in 1916. Alice was from Millicent, South Australia and was twenty-four years old.  After their marriage, Arthur headed overseas and Alice moved to live in Windsor in Melbourne.

Arthur joined his unit on 2 August 1916, initially in Geelong and then he would have gone to Broadmeadows with the 29th Battalion.  Meanwhile, in France, events unfolded that would not have filtered home at the time of Arthur’s enlistment.  His cousin Edgar was listed as missing at Fromelles on 28 July 1916.  A court of enquiry twelve months later found that Edgar was killed in action, with the date given as 16 July 1916 during the Battle of Fromelles.  Also, on 28 July 1916, Arthur’s brother Frederick James Holmes was shot in the shoulder in France.  He was later to return home due to his injuries.  As he donned his uniform for the first time, Arthur would have been oblivious that the horror of war had touched his own family.  By the time he sailed for Plymouth on 26 October 1916, the news would have reached him and one could imagine he left Australian shores with a heavy heart.

On the voyage to England, Arthur was promoted from Private to Acting Sergeant without extra pay, as he was bandmaster for the trip. The Holmes boys were musical.  Arthur’s older brother Goldie was an Australian Cornet Champion in the 1920s and led many large bands around Australia.  Arthur may have had the same abilities and aspirations.

On arrival in England, Arthur left the 29th and joined the newly formed 62nd Battalion.  The 29th moved on to France while Arthur stayed in England until the 62nd Battalion was disbanded in September 1917.  Arthur returned to the 29th Battalion in France, arriving on 15 October 1917 almost a year since he left home.  The 29th Battalion were experiencing a relatively quiet period, following their involvement at Ypres, and as the allies prepared for the eventual Battle of Hamel.  This meant no less of a danger for the soldiers.  On 12 June 1918, Arthur Holmes was overcome by mustard gas, the feared silent killer.  It was never an instant death.  In Arthur’s case, he passed away the next day, 13 June 1918 at the 12th Casualty Clearing Station at Hazebrouck.  He was initially buried at the Longpré Cemetery before being exhumed, with forty-one other fallen soldiers and re-interred at the Crouy British Cemetery, his final resting place. 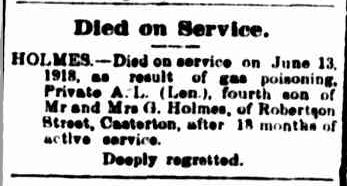 On 21 August 1918, a memorial service was held at the Scots Church, Casterton to remember three of Casterton’s men, William Zimmer, Leyton Loggins and Arthur Holmes.  Reverend Mears said of Arthur

What of Arthurs new bride, Alice?  She spent some time in Melbourne after his death, before moving to Daylesford.  She lived at Belvedere House, lodging rooms in Vincent Street, with her widowed mother, Annie Osborne.  In January 1919, Alice received a parcel containing Arthur’s possessions.  Along with personal items such as photos, letters, and a diary, there were small hints about Arthur’s time overseas, a French dictionary, a knife and fork in a case, a razor and mirror.  Did she open the parcel?  Did she read Arthur’s diary?  We will never know, but this is all she had left of her time with Arthur along with her memories.  They did not have time to have a home together or raise a family.

In 1923, Alice’s mother passed away, and she stayed on in Daylesford before her own death in 1930 at only thirty-eight.  She is buried at the Daylesford cemetery.

In Arthur’s hometown of Casterton, he is remembered on the Town Hall Honour Roll and the Casterton War Memorial

Reading of Arthur’s fate reminded me of a poem I studied at school by the great World War 1 poet Wilfred Owen, Dulce Et Decorum Est.  The haunting words give some insight into the experiences of the thousands of Australians who served their country in World War 1 and the discovery that the Great War was not the big adventure so many expected.

Bent double, like old beggars under sacks,
Knock-kneed, coughing like hags, we cursed through sludge,
Till on the haunting flares we turned our backs
And towards our distant rest began to trudge.
Men marched asleep. Many had lost their boots
But limped on, blood-shod. All went lame; all blind;
Drunk with fatigue; deaf even to the hoots
Of disappointed shells that dropped behind.

GAS! Gas! Quick, boys!– An ecstasy of fumbling,
Fitting the clumsy helmets just in time;
But someone still was yelling out and stumbling
And floundering like a man in fire or lime.–
Dim, through the misty panes and thick green light
As under a green sea, I saw him drowning.

In all my dreams, before my helpless sight,
He plunges at me, guttering, choking, drowning.

If in some smothering dreams you too could pace
Behind the wagon that we flung him in,
And watch the white eyes writhing in his face,
His hanging face, like a devil’s sick of sin;
If you could hear, at every jolt, the blood
Come gargling from the froth-corrupted lungs,
Obscene as cancer, bitter as the cud
Of vile, incurable sores on innocent tongues,–
My friend, you would not tell with such high zest
To children ardent for some desperate glory,
The old Lie: Dulce et decorum est
Pro patria mori.

*It is sweet and right to die for your country