A small but interesting band of pioneers join the August Passing of the Pioneers.

Stephen Rowan ROBERTSON: – Died 19 August 1900 at Portland. Stephen Rowan Robertson was a she, not he, a sister of John G. Robertson, owner of Wando Vale station. Stephen arrived in Victoria in 1842 around the age of thirty-four and in 1846 she married William Corney (below) who took up the lease of Wando Vale. After some time back in England, William and Stephen made their home at South Portland. One of the stained glass windows at St Stephen’s Church, Portland was dedicated to William Corney (below) by his son Robert.

Peter MacKINNON: Died 5 August 1902 at Hamilton. Peter MacKinnon was born in Sterlingshire, Scotland around 1825 and arrived in Victoria around 1852. His first job in the colony was at Coleraine as a bookkeeper and then later at Hamilton as a bookkeeper for the timber yard of Mr Collins in Gray Street. He then worked for many years at the Hamilton Spectator as a machinist. In his later years, he returned to bookkeeping with the Collins timber yard.

Thomas REES: Died 7 August 1918 at Hamilton. This is one of the first obituaries I have posted from the Hamilton Spectator and it has one of the best openings to an obituary (only a genealogist could/would say that). The reference to the early colonist encapsulates the spirit of the monthly Passing of the Pioneer posts. 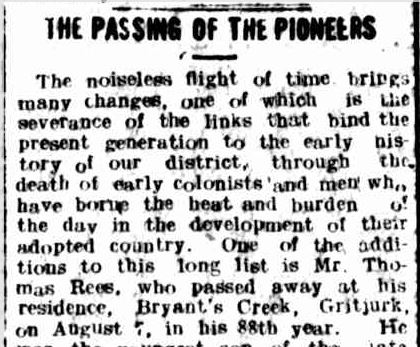 Basil McConochie LYON: Died 7 August 1916 at Coleraine. Basil Lyon was born in Glasgow, Scotland around 1850.  When he arrived in Victoria he went to the Konongwootong Creek Estate the property of his maternal uncle. John McConochie. He later took up land with his brother at Balmoral.  Basil was  a member of the Kowree Shire Council for several years and was also a Justice of the Peace.  He was a founding member of the Coleraine branch of the Australian People’s Party.

Arthur BALLMENT: Died 26 August 1916 at Perth, Western Australia. Arthur Ballment was from Plymouth, England where his father Hugh was a well-known shipbuilder and merchant.  Arthur left England in 1865 aboard the Roxburgh Castle to Melbourne aged twenty-one. He gave New Zealand a try before returning to Victoria and Ararat where he ran a tannery business. He had a strong interest in politics, at a local level while in Ararat and upon retirement to Western Australia, thirteen years before his death, he followed both Australian and British politics. Arthur was described as a “typical Englishman”. One of Arthur’s sisters married British political cartoonist, Sir Francis Carruthers Gould while his daughter  Marion was a Western Australian based artist of some note.

William ROBERTSON: Died 6 August 1918 at East Melbourne. William Robertson, a son of Duncan Robertson and Ann Fraser, was born in New South Wales in 1839 and went to the Western District with his family aged four. Duncan took up Straun. He later moved to Gringegalgona  where William remained, unmarried, for the rest of his life. William was keen on horse racing and over a forty-year period his horses won the Casterton Cup on two occasions, the Warrnambool Cup, and the Great Western Steeple. His trainer was James Agnew, also a Passing Pioneer this month (below). 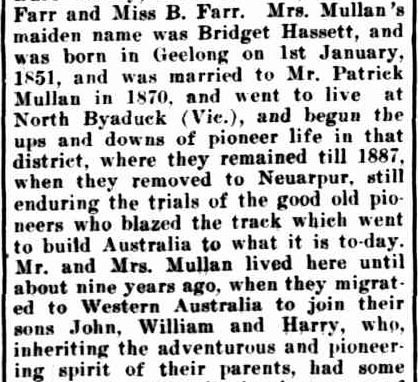 Bridget Hassett and her husband Patrick Mullan raised a family of thirteen children, five of whom were still living at the time of her death, as was Patrick then aged ninety.

Letitia BEST: Died  7 August 1941 at Melbourne. Born around 1848 in County Caven, Ireland, Letitia Best arrived at Portland in 1856 aboard the General Hewitt with her parents William and Letitia Best and six siblings (NB: the date of arrival in Letita’s obituary is 1853). The family settled at Heywood where Letitia later married Donald Rankin. Donald and Letitia spent some years at Harrow before moving to Western Australia for 30 years. When Donald passed away, Letitia returned to Victoria.

James AGNEW: Died 10 August 1942 at Hamilton. James Agnew was born at Cowie’s Creek near Geelong around 1857 and as a boy moved with his parents to the Wimmera. In his  teen years, James moved to the NSW Riverina working at Yanco Station where his career with horses began. A meeting with the trainer of Carbine, Walter Hickenbotham spurred him on to become a racehorse trainer.

James eventually settled in Hamilton as a trainer and took on horses for owners such as George Robertson (above) and John Kirby. The racing career of Kirby’s horse The Parisian was all but over when he arrived with Agnew with the horse failing over short distances . James saw the staying potential in the horse and trained him accordingly.  As a result he won the Warrnambool and Hamilton Cups. Kirby then too saw The Parisian’s potential to win a Melbourne Cup and moved the horse to a Melbourne trainer, thus robbing James Agnew of a chance to win a Melbourne Cup, as The Parisian saluted in 1911.  If it wasn’t for James Agnew, James Kirby is unlikely to have held the Melbourne Cup in 1911.