There are many things to like about researching Walt.  He and wife Lydia Poynton chose beautiful names for their children. They also liked to be photographed and I have been lucky enough to view some of those wonderful snaps. Also, Walt’s obituary was rich with history and is the kind I wish I could find from James Harman’s death.

Walter was born in December 1845 at Melbourn, Cambridgeshire, England to Joseph and Sarah Harman.  It would be unlikely he remembered a time when older brother James, 15 years his senior, lived in the family home.  While in England he would not have had much to do with any of his older brothers as, by the time he was 8, four of them had left for Australia.

In 1854,  Walter sailed with his parents, Joseph and Sarah, sister Sarah and younger brother Alfred for Sydney aboard the “Queen of England“.  We now know the family went to Western Victoria and were in Byaduk by 1863.

In 1872, aged 27, Walter married Lydia Poynton, daughter of John Poynton and Lydia Walton. Immigrants from Lincolnshire, England, the Poyntons lived in the Macarthur area. The following year Walter applied to the Lands Board for a license on 300 acres near Macarthur. 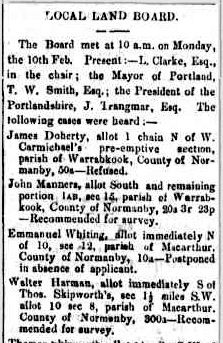 In 1879, he applied for the land next door to the earlier allotment, a further 44 acres. 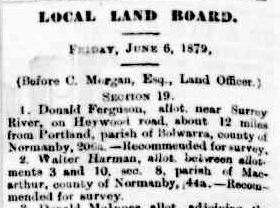 Walter and Lydia started their family without haste, with Eunice Walton Harman born the year after their marriage.  Another nine children followed over the next 15 years.

This brings us to the wonderful names of the children of Walter and Lydia.  Eunice Walton takes her second name from her maternal grandmother, Lydia Walton.  Susannah Nash was named after her maternal aunt Susannah Poynton.  Susannah married John Nash in 1869 but she died in 1875, aged just 34.  That was the same year Susannah Nash Harman was born. Lydia’s other sister, Mary, also named her daughter Susannah Adeline Skipworth in the same year as her sister’s death.

My favourite name is Julia Georgina.  Julia is such a beautiful name and it may have come from her older cousin Julia Harman, daughter of James.  Selina Victoria is another of my favourite names.  Louisa Mulberry takes her second name from her paternal grandmother, Sarah Mulberry and John Joseph Stanley was named after his grandfathers, Joseph Harman and John Poynton.  I have absolutely no idea where the name Golder Alberta Arlettie may have come from!

Just when it seemed Walter was settling into a life in the Western District, around 1888,  Walter Harman packed up the family and made the long trip to Ensay in East Gippsland, Victoria’s High Country.  It is the move which interests me, both the reason for travelling to the other side of the state and how they made the trip of over 600 kilometres, including the route they travelled.  The Ensay district did sound enticing, as this article from 1888 suggests: 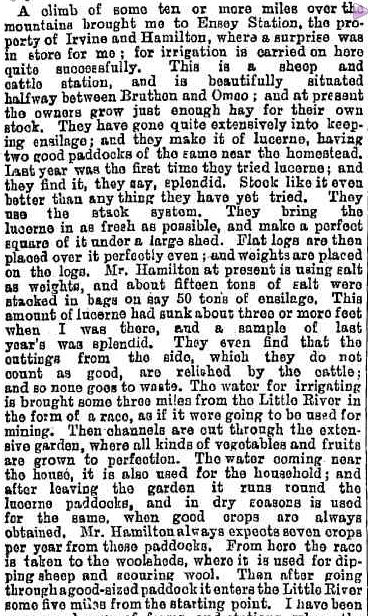 In 1843, Ensay Station comprised 38,400 acres.  An article from the Bairnsdale Advertiser and Tambo and Omeo Chronicle in 1917 cites the total acreage at Ensay Station at that time as 11,000 acres.  Over time, land was sold off to the likes of Walter Harman.

When I started researching the Harmans and I found the first references to Omeo, about 40kms north-west of Ensay, I imagined that Walt and his family went alone.  As my research continued I discovered the Condon family from the marriage record of Susannah Nash Harman and William Condon in 1898.  William was born in Portland in 1870, the son of William Charles Condon and Susan Baker. 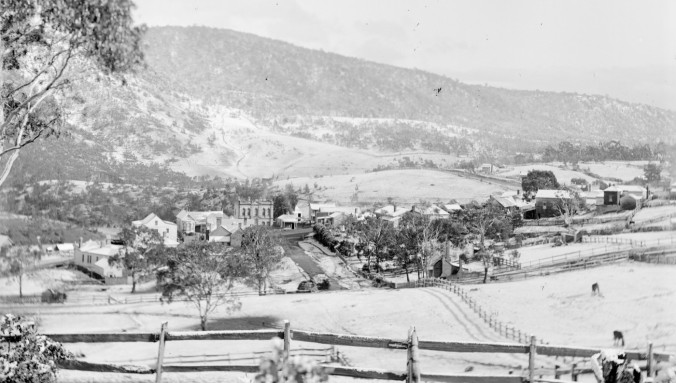 Later, thanks to newspaper reports of  Henry HARMAN’s court appearances in the trial of Ronald Griggs, I found John Henry CONDON, father of Lottie Condon.  While John was born in Omeo, he was the cousin of William Condon, Susannah Harman’s husband.  Not only that,  John Condon’s wife, Frances Ethel HUGGINS was born at Mount Eccles, near Macarthur in the Western District.  Frances’ mother was a SKIPWORTH, from Macarthur and her grandmother was a POYNTON, sister of Lydia Poynton, Walter Harman’s wife.  That sister, Mary, was also in the area with her husband, Thomas Skipworth. Phew!

Confusing maybe, but it shows five families living in the Omeo/Ensay area all with links to Byaduk/Macarthur and all connected through marriages over three generations.  Oh yes, Mary Poynton’s daughter Lydia Skipworth took along her new husband Andrew BAULCH from Tower Hill, near Warrnambool.  By 1890, his parent James Baulch and Ann Hulm were living at Bairnsdale.

So, the next question was, who was the trailblazer that made the first big move to the High Country, or was there a convoy of families making the move at the same time?

Using the years the children were born as a guide, the first family to make the move appears to be Henry Condon, older brother of William Condon with his wife Agnes Huggins, aunt of Frances Ethel Huggins.  Married in 1885, their first child was born at Omeo in 1886.  Agnes’ brother James Huggins and wife Elizabeth Skipworth had a child in Macarthur in 1886 with the next child, Thomas Leslie born in 1888 at Omeo.  This is also the same year John Joseph Stanley Harman was born at Omeo.

The obituary of John Tomlin Poynton, nephew of Lydia, talks of his move to the High Country in 1888 with his brother Edward with yet another family tie in, this time to the Skipworths. 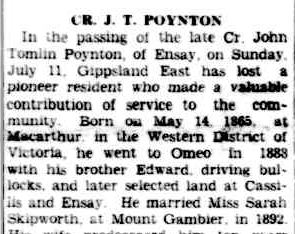 The Hamilton Spectator of 8 March 1888, included the following from the Byaduk correspondent, “Several farmers in the neighborhood who have had the good fortune to secure what are said to be superb selections in Gippsland, intend leaving here for that part of the country shortly. “

Walter, with help from Lydia, worked quickly to establish a Sunday school at Ensay and they were a major force behind a State school being opened in the town. 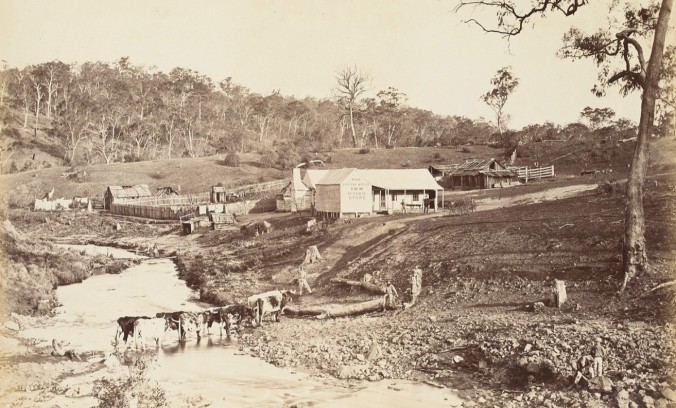 In 1890, Walter was one of the first trustees of the Ensay Public Cemetery.  The name of the Harman property at Ensay was Systonholme.  This name paid tribute to Lydia’s birthplace, Syston, Lincolnshire, England.

Like his brother James, Walter was a lay preacher for the Methodist Church and would travel by horseback spreading the word of John Wesley.

In 1892, tragedy struck the Harmans in quick succession.  Seth died in July, aged 7 and Nathan passed away in August, aged 13.  The boys were buried at the Omeo cemetery.  Their death certificates are just another two on my long list of “must get” certificates, to see how the boys died so close together, although one would assume it was illness.

I love this photo of Walt and Lydia.  Despite the stiffness and lack of emotion of early photographs, there is a warmth here and the two seem very comfortable in each other’s company.  They were a team, and this is clear from the photo.  I would like to thank Linda Thatcher for allowing me to use this wonderful photograph. 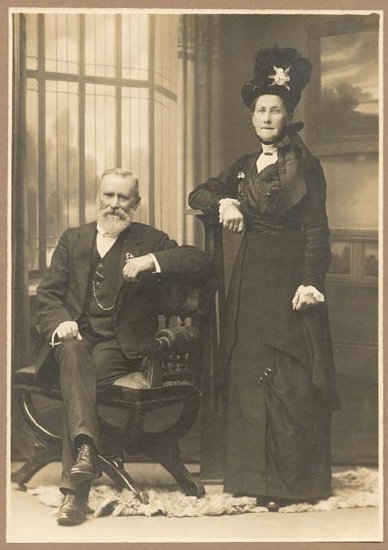 In Walter and Lydia’s later years, they moved into “town”, taking up residence in the Melbourne suburb of Malvern.  In 1923, they were living at 11 Jordan Street with their house named Systonholme, a reminder of Ensay. Daughter Selina was living with them and Julia and her husband Arthur Lousada moved from their home in Toorak to 113 Tooronga Road Malvern, only two streets from her parents.

In 1926, Lydia passed away aged 79.  Walter had lost his beloved wife, the woman with whom he had pioneered and raised 10 children.  A  family notice was placed in The Argus at the time of her death:

In 1928, two years after Lydia’s death, Walter and daughter Selina placed an “In Memoriam” notice in The Argus and the pain was still clear.

Faced with life without Lydia, Walter returned to live at Ensay, his other great love.  On 22 October 1936, Walter passed away at  Systonholme, Ensay.

His obituary from the Gippsland Times is a fitting tribute to such a wonderful pioneer who gave so much to his local community while ensuring a comfortable life for his family. 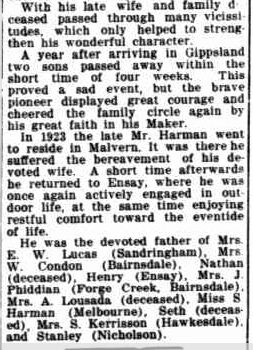 As yet, I have not found an obituary for James Harman but the words written of Walter may give a clue to James himself…”his sterling Christian character, his genial personality, and his extreme kindness to all whom he met”.  There are many similarities between James and Walter, despite their age difference and the fact they lived on opposite sides of Victoria, including their devotion to the Methodist Church and their community involvement.  Both brothers played a role in establishing schools in their respective towns.  The obituary also reconfirmed the Harman’s journey from N.S.W. on arrival in Australia to Port Fairy and then Byaduk.

While Walter Harman is remembered as an Ensay pioneer, he also lived in Byaduk and district for 25 years from the age of 18 to 43, which one could describe as his “formative years”. There was plenty of time for the characteristics, passions and wisdom of his brothers to rub off.

7 thoughts on “From Stone Country to High Country”