Some of my favourite early settler stories come from those who had almost a lifetime of experiences before they reached Victoria.  Some of those I’ve written about here had travelled to such places as the Americas, the Middle East, and Indonesia during the 1840s and 1850s.  One of the subjects this month, Adolphe Destree had similar experiences and had basically travelled around the world before he reached Portland in his early twenties.  Nine others join Adolphe for June and while they hadn’t travelled the world, they still have their own interesting stories to tell.

DESTREE, Adolphe Jean Baptist – Died 11 June 1875 at Hamilton. Adolphe Destree was born at The Hague, Netherlands around 1835. He trained as a watchmaker and spent time working in Europe and London before travelling to North America.  After working in New Orleans and New York he sailed to Melbourne arriving in April 1857 on the Hussar.

After some time working in Melbourne and only still in his early twenties, Adolphe made his way to Portland. He set up shop there, working out of the Portland Dispensary in Percy Street.

In 1860, Adolphe decided to leave Portland for Hamilton. 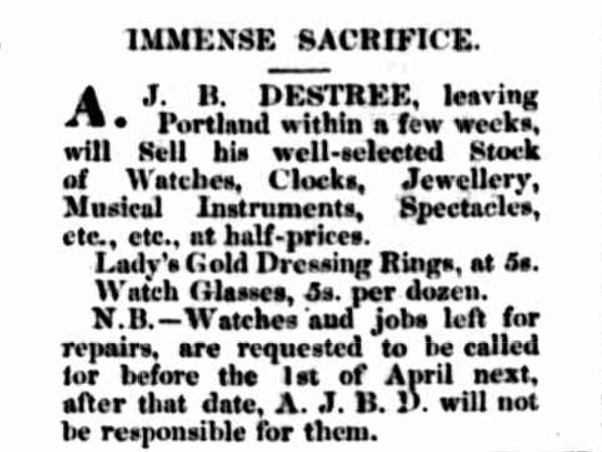 He set up shop in a slab hut near the corner of Gray and Brown Streets, Hamilton, then known as Keepings Corner after the local tinsmiths operating from that corner.

On 1 February 1863, Adolphe married Annie O’Donnell and a son Adolphe Jr was born at Hamilton in 1864, the first of a family of five sons and one daughter. Henrietta born in 1868 sadly died at the age of ten months.

Adolphe moved his business from the slab hut to a more substantial shop in Gray Street closer to the intersection with Thompson Street. On the night of 20 September 1870, a fire broke out in Gray Street destroying seven shops including Adolphes.  Like many of the business owners, the Destree’s lived behind the shop and lost all their possessions.

Adolphe moved into a shop across the road near the corner of Gray and Thompson while he rebuilt and he moved his family to Kennedy Street.

On 11 February 1875, Annie gave birth to a son Harold but exactly four months later on 11 June, Adolphe died after a short illness leaving Annie and five young sons. He was only forty. Adolphe was buried at the Hamilton Cemetery (below).

Annie initially continued on Adolphe’s business but by September 1875 she had sold to Farroll & Sons Jewellery Importers.

TYTHERLEIGH, Robert – Died 17 June 1889 at Casterton.  Robert Tytherleigh was born in Axminster, Devonshire, England in 1807.  He arrived at Portland in January 1857 aboard the Mary Ann with his wife Susan and two sons, James and George.  The family settled in Portland and Robert began work as a blacksmith and farrier in Percy Street.

In 1881, Robert and Susan went to Casterton to live with his son.  He died in June 1889 aged eighty leaving Susan and five sons. One son and a daughter predeceased him.

In 1907, a son of Robert and Susan, John Tytherleigh must have been doing some family history research when he wrote to the Portland Guardian, hoping to find out the details of the arrival of the Mary Ann in 1857. The Guardian in response reprinted the shipping details from the papers edition of 30 January 1857.

FALKENBERG, Johann – Died 9 June 1899 at Byaduk.  Johann Falkenberg was born around 1835 in Prussia.  He arrived in Adelaide around 1852 and spent time in South Australia working for his brother before travelling to Victoria. He was just east of Hamilton at Pierrepoint for a couple of years before returning to South Australia. It wasn’t until 1863 when Johann finally settled in Victoria, taking up one of the first selections at Byaduk. In 1868, he married Ann Hallam and they went on to have a large family. Sadly Ann died in 1881 aged thirty-two leaving Johann with seven young children.

On several occasions, Johann wrote letters to the editor of the Hamilton Spectator. In 1874, he wrote of the plight of the selector farmer competing for land against the graziers.

He had ongoing sheep thefts from his properties and in 1884, he wrote of what appeared to be a case of one law for some and not for others.

Rabbits were in plague proportions around the Byaduk area during Johann’s time there, living in the stones from the ancient lava flow of Mount Napier.  Johann felt he was the “greatest sufferer” in the rabbit situation.

Johann died in 1899 aged sixty-four and was buried at the Byaduk Cemetery.  He left four sons and three daughters, the youngest of whom was nineteen.

KERR, Elizabeth Adams – Died 1 June 1913 at Hamilton. Elizabeth Kerr was born in Glasgow, Scotland around 1833.  She arrived in Sydney with her parents in November 1841 aboard the Trinidad.  Her father Thomas Kerr was a police constable in Sydney but he took up a job of customs officer at Portland which saw the family’s move to Victoria.  In 1850, Elizabeth married Walter Herd and they moved to the Coleraine district. They raised a family of five daughters but Walter died in December 1876 and was buried at the Coleraine Cemetery. In 1878, Elizabeth married  Thomas Penhall in 1878 and she continued living at Coleraine.  Thomas died in November 1912 so Elizabeth moved to Hamilton to live with her cousin Albert Kerr of Lonsdale Street. She died there on 1 June 1913 leaving five daughters.

BROKENSHIRE, John – Died 4 June 1914 at Hamilton. John Brokenshire was born about 1849 in Cornwall, England, and arrived in Australia around the mid-1860s.  In 1872, he selected seventy-seven acres of land in the Victoria Valley which he sold in March 1877.  He had married Emma Cooper in 1876 and the couple moved to Hamilton where John worked as a labourer. Their first child, a daughter Emily, was born that year.

The Brokenshire family saw much tragedy. John and Emma had nine children in total. Three children were born between 1876 and 1880 but by the end of 1880, they had all died.  Baby John died in February 1879. Then came a diphtheria epidemic in 1880.  Emma and her daughter Emily were admitted to the Hamilton Hospital in late April displaying symptoms of the disease. Emily died and was buried on 2 May.  Young Henry also fell ill and died on 19 May from erysipelas, a complication of his diphtheria diagnosis. In a matter of fifteen months, their three babies were gone.  Four more children were born during the 1880s, but three-year-old Thomas died in January 1888.  Two children were born in the 1890s, Elizabeth in 1892 and Joseph in 1895.

On 21 April 1914, another of the Brokenshire children would meet an untimely end. Twenty-six-year-old James was killed while helping convert the former Wesleyan Methodist Church in McIntyre Street, Hamilton into a private home.  The scaffolding James was standing on collapsed, and he fell onto a pile of bluestone and died soon after. John took the news hard and he died less than two months later. It was thought the shock of losing James advanced his demise.  John was sixty-five and left his widow Emma and two sons and two daughters.  Then on 27 March 1918, more tragedy when one of the remaining sons Joseph was killed in action in France

DAVIS, Hester Jane – Died 4 June 1914 at Mortlake. Hester Davis was born in Somerset, England about 1850 arriving in Victoria when she was around sixteen.  She married Thomas Montgomery on 28 April 1870 at Warrnambool.  They had no children.

The Montgomery’s lived at Killymard at Mortlake. Thomas was a shire councilor and also served as shire president with Hester accompanying him to many official functions. Hester was a devout Methodist and attended the Mortlake Methodist Church (below). She was involved with the church community in many ways including as a Sunday School teacher.

Hester died in 1914 aged sixty-four. She was remembered at a memorial service at the Methodist Church on 21 June 1914.  Memories of Hester, written by congregation members were read.

RIGBY, William – Died 17 June 1914 at Portland. William Rigby was born in Staffordshire around 1850 and arrived in Victoria aboard the Athletae with his parents in 1855.  The family settled in Heywood. When William was older he went to work for the shire council and was the caretaker and librarian of the Heywood Mechanics Institute. In 1872, he married Sarah Ann Lovell.  In May 1898, William’s wife Sarah Ann died aged forty-four. in 1901, William remarried to Caroline Heazlewood Bye. William was a member of the Sons of Temperance and the Methodist Church. In January 1905, William went to Portland to celebrate the jubilee anniversary of his family’s arrival in Victoria. 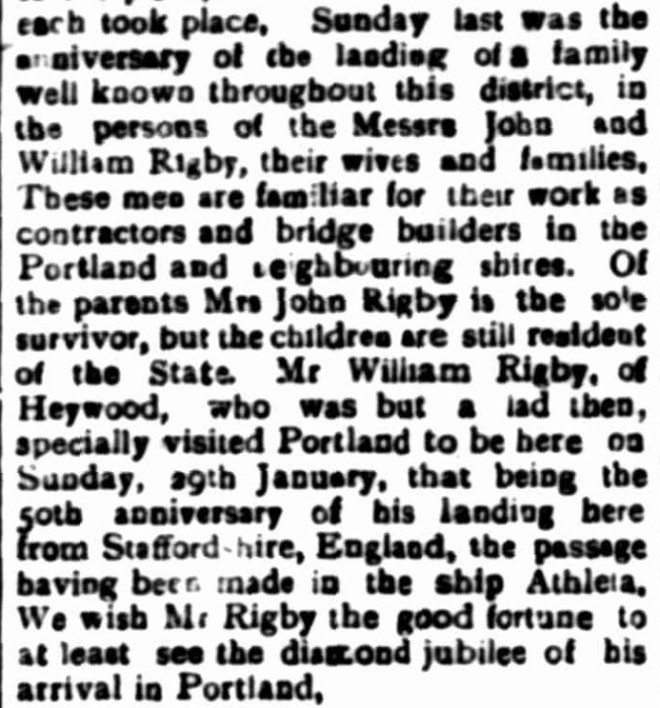 In March 1913, William resigned from his position as an officer of the Heywood Shire Council.  He had bought a cottage in Portland and was retiring there.  He died only fifteen months later at the age of sixty-five. He left his widow Caroline and his children from his first marriage to Sarah Lovell.

HEALY, Margaret – Died 8 June 1917 at Macarthur. Margaret Healy was born around 1837 in Kilkenny, Ireland. She arrived in Australia around 3 June 1852.  In 1854, she married Joseph Twist and they settled at Macarthur then known as Eumeralla. At the time there were only three tents and a wooden building called Robbies Store.  Margaret lived out her life at Macarthur and was eighty-six at the time of her death.  She left her husband Joseph, two sons, and four daughters. Joseph Twist died in 1919.

AUSTIN, Harriet – Died June 1917 at Hamilton. Harriet Austin was born in Huntingdonshire, England around 1837.  She married Thomas Walker and they had two children before they boarded the Ocean Home for Victoria in 1860.  On arrival, the Walkers headed for Hamilton settling in North Hamilton.  Around 1907, Harriet and Thomas took up residence in Collins Street, Hamilton.  Harriet died in late June 1917 and was buried at the Hamilton Cemetery on 26 June. She left her husband Thomas and five sons and two daughters. Thomas placed a Bereavement Notice in the Hamilton Spectator.

MITCHELL, Alfred – Died 15 June 1932 at Sandford. Alfred Mitchell was born at Henty near Merino in 1865. On the death of his father Richard, Alfred inherited part of his land and after buying further land, he was able to establish the property, Trevellas Downs.  In 1888, he married Elizabeth Cox. Alfred was a leader of agriculture in the district and always open to new ideas.  His dairy herd was considered one of the finest in Victoria.  He was also a Justice of the Peace and Glenelg Shire councilor for 22 years from 1908 to 1926 and from 1928 to 1932 and president in 1916/7.  In 1931, Alfred lost his woolshed, skin shed, and grain when a fire went through Trevellas Downs.

At the time of his death, Alfred left his widow Elizabeth, four sons, and two daughters.  He was buried at the Sandford Cemetery.