Over the past two weeks, I’ve visited three Western District cemeteries, each offering great views of the surrounding area.

Firstly, I took a trip to Hamilton and rarely do I visit without taking a drive out Coleraine Road to the Hamilton (Old) Cemetery.  Aside from dropping by the graves of my great grandparents and great great grandparents, the main task on my visits is photographing the multitude of headstones.  I’ve got a long way to go with just over five hundred photos which include a lot of multiples.  But while wandering around the rows of graves it’s hard not to stop for a photo of the view towards volcano Mount Napier to the south.

LOOKING TOWARD MT. NAPIER FROM THE HAMILTON (OLD) CEMETERY

It’s even better in Autumn 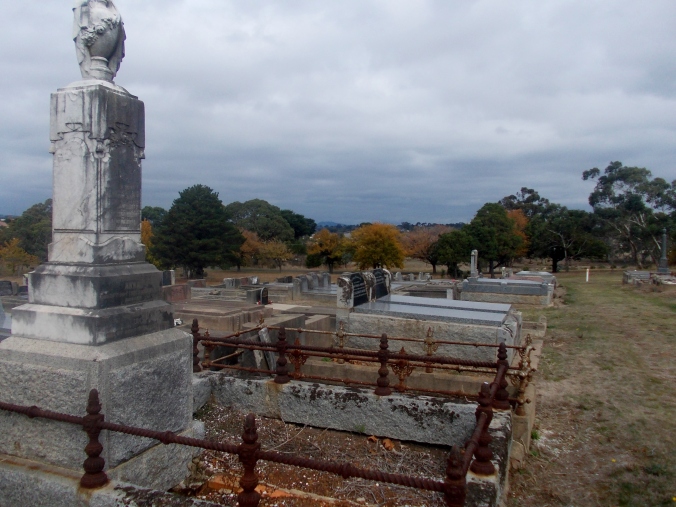 AN AUTUMN VIEW TO MT NAPIER FROM HAMILTON (OLD) CEMETERY.

Then there’s the beauty of the many and varied monuments rising up across the cemetery’s expanse.

If you look in the right direction you can even catch a glimpse of one of Hamilton’s beautiful steeples. 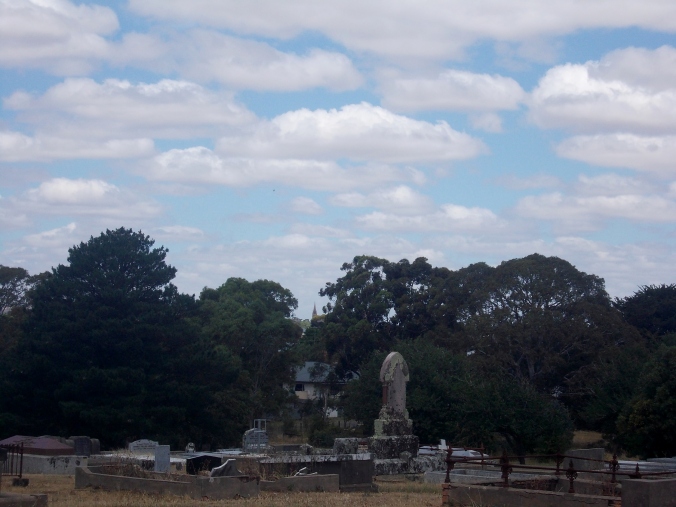 This visit I tried to find graves using directions from the Hamilton Cemetery Trust website.  I first went in search of Mary Ryan, one of the Western District’s Wonderful Women.  Mary appeared not to have any family so I’m interested to see if she has a headstone.  She is buried in the Church of England section, a large area running down the eastern side of the cemetery. Although the various denominations are clearly marked, the rows are not and I was soon lost.  I tried using the cemetery site’s mapping on my phone but that wasn’t easy and I tried referring to the large plan at the front of the cemetery.  In the end, I gave up and went back to my random photo taking.  I think I’ve a solution so I’ll try it next time and let you know.

At Hamilton, photos of broken headstones are also on my list like this one belonging to Frances Mary Sing who died a mysterious death in 1881 and her husband Hamilton draper Sam Hing. It includes a Cantonese inscription at the bottom.

Heading home from Hamilton, I had a brief stop at the Dunkeld (New) Cemetery mainly to get some photos of the views towards the Southern Grampians. If you look one way, you see Mount Sturgeon (below).

Look the other way and you see Mount Abrupt (below).

The Dunkeld District Historical Museum has a tour of the cemetery on 31 March and I hope to get along for more photos from this picturesque cemetery.  You can find out about the tour on the Museum’s event page on Facebook – https://www.facebook.com/events/904350026381602/

On Friday, I travelled to Willaura, between Glenthompson and Ararat and, of course, called in at the cemetery.  In use since 1917, it’s a relatively new cemetery compared to some in nearby towns. Again it was hard not be distracted by the view of the Grampians.

A GRAMPIANS VIEW FROM THE WILLAURA CEMETERY

THE GRAVE OF JOHN AND ELIZABETH WRIGHT AT WILLAURA CEMETERY 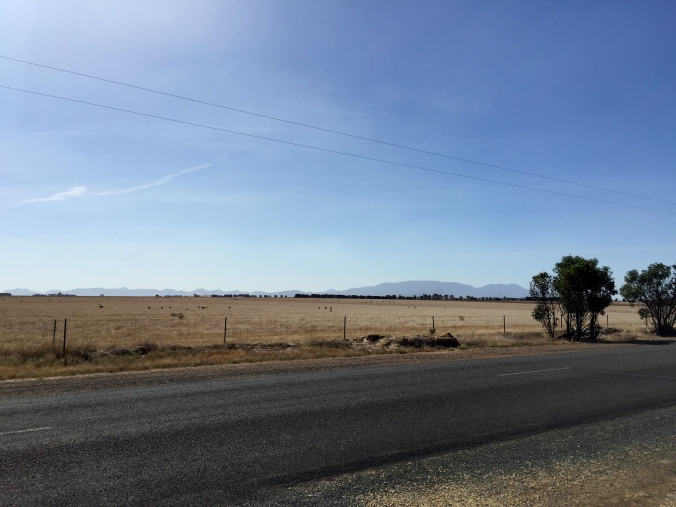 FROM THE FRONT GATE OF WILLAURA CEMETERY

Those cemeteries with a good view I’ve previously posted about include Portland North, Cavendish Old Cemetery and Old Dunkeld Cemetery.  Currently, I’m working on a post about the Yambuk Cemetery with its own unique view.

One thought on “Cemeteries With a View”