At the Western District Families Facebook page, I’m soon to depart on a “historical tour” of the Hamilton Highway. After successful “tours” of the Glenelg Highway and Great Ocean Road, it’s time to set off again with photos such as the one below a feature.

With the use of “Out of Copyright” photos from the State Libraries of Victoria and South Australia and the Museum Victoria collection, visitors to the page can “travel” the highways and see the sights of the towns and landmarks as they looked fifty to one hundred years ago or more.  The most recent tour of the Great Ocean Road began at Wye River and continued west to Allansford, east of Warrnambool.  It was a trip of contrasts from spectacular coastlines to towering forests and the odd shipwreck.  Lasting almost five weeks, I posted almost 250 “Out of Copyright” photos mostly postcards.  Here are a few of my favourites. 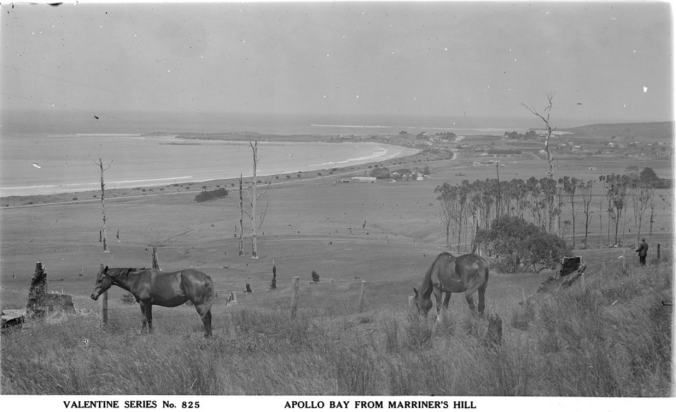 THE WRECK OF THE FALLS OF HALLADALE. Image courtesy of the State Library of South Australia Image no. PRG 1373/18/17 http://collections.slsa.sa.gov.au/resource/PRG+1373/18/17

So now for the Hamilton Highway, beginning west of Geelong at Hesse and “travelling” 180 kilometres to Tarrington around ten kilometres east of Hamilton.  Once again there is a wealth of “Out of Copyright” photos available, a lot more than I expected. I thought this would be a shorter tour than the Great Ocean Road but thanks to the man below, Gabriel Knight of Cressy and his passion for photography, we might be lucky to get to Lismore by Christmas!  I will also post about Gabriel and his family at Cressy along the way.

Drop by the Western District Families Facebook page from 7:00 pm tomorrow night, Friday 25 November and see how the Hamilton Highway used to look.  If you scroll through the feed, you can take the return trip along the Great Ocean Road and Glenelg Highway. If you’re not a Facebook member you can still view the page, just ignore the prompts to join.

While visiting Facebook, the Hamilton’s WW1 page offers something extra too.  From each day of publication of the Hamilton Spectator, I post a daily article from 100 years before depicting life in Hamilton and district. The following are examples of articles posted during November

The page also links to the stories of Hamilton’s enlisted men on the anniversaries of their enlistment, embarkation, and their death or return home.  Here on the blog, I’m continually adding new stories to Hamilton’s WW1 and have now posted stories for around 80% of the men named on the Hamilton War Memorial and similar for Anzac Avenue.

5 thoughts on “Historical Tours of the Western District”