It was time I considered how Western District Families could commemorate the centenary of WW1. A project was selected and work began, however another idea presented itself. A list of names in two editions of the Hamilton Spectator from 1917 and 1918 and some potted histories of Hamilton soldiers I wrote for the I’ve Lived in Hamilton Facebook group saw “Hamilton’s WW1” come to fruition.  The first installment of “Hamilton’s WW1”  is now available, the story of Hamilton’s Anzac Avenue and the men commemorated at a now all but forgotten landmark in Hamilton.

Each of the faces in the photo below have a story to tell. They are some of the early Hamilton enlistments and immediately I recognise twenty-two year-old Hamilton College and Geelong College educated John “Paddy” Fenton (back row, 3rd from right) and George McQueen (centre, 2nd row from front) a thirty-five year-old widower, both killed in France. Others among them were also killed, some wounded and others suffered psychologically but as they gathered at Broadmeadows in 1915, none could imagine the path ahead. What was in store for them or the man beside them. But they were “Hamilton Boys” and they would give it their all and they did. 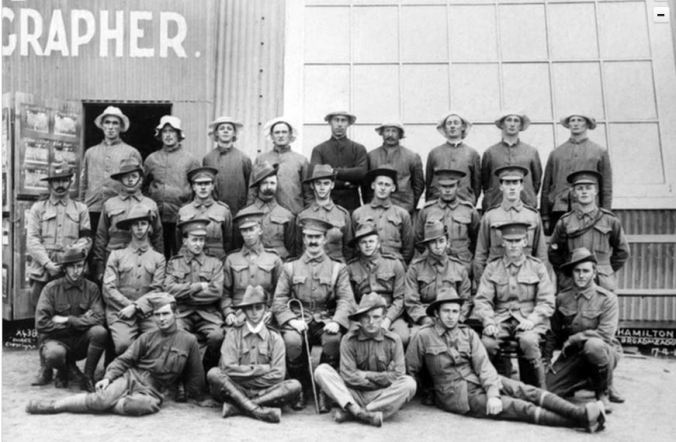